Bill Barr confirmation hearing recap: What we learned about how he would run the Department of Justice

William Barr was sworn in Thursday as President Trump’s next attorney general following his confirmation by the Senate earlier in the day, placing him in charge of a Justice Department whose past officials have come under sharp criticism from the president over the ongoing Russia investigation Barr will now oversee.

Several Democrats joined nearly all the Republicans in confirming Barr, 68, a longtime lawyer who served as attorney general from 1991 to 1993 under the late President George H.W. Bush. He was confirmed 54-45.

WHO IS WILLIAM BARR? 5 THINGS TO KNOW ABOUT THE NEXT ATTORNEY GENERAL

Barr was sworn in Thursday afternoon in the Oval Office at the White House by Chief Justice John Roberts.

Barr becomes the second full-fledged attorney general of the Trump administration: the president, upset over his recusal in the Russia investigation, fired former Attorney General Jeff Sessions from running the Justice Department the day after the 2018 midterm elections. Matthew Whitaker has served as acting attorney general during the vacancy.

Barr’s confirmation came the same day former FBI Deputy Director Andrew McCabe, who was fired by the president last year, detailed the central role he played in the bureau's Russia probe and the eventual appointment of a special counsel -- while describing Justice Department meetings where officials discussed ousting the president.

Trump fired back that McCabe is a “disgrace to the FBI and a disgrace to our Country.”

Barr’s Senate confirmation hearings ended last month with little uproar. But even so, some Democrats charged that Barr had indicated he would exploit legal “loopholes” to hide Special Counsel Robert Mueller’s report from the public and resist subpoenas against the White House.

Sen. Richard Blumenthal, D-Conn., on Thursday said he would vote against Barr's nomination because he has "not committed to making special counsel findings public and not committed to public testimony from Mueller."

TRUMP BLASTS MCCABE AS A 'DISGRACE' TO FBI, COUNTRY 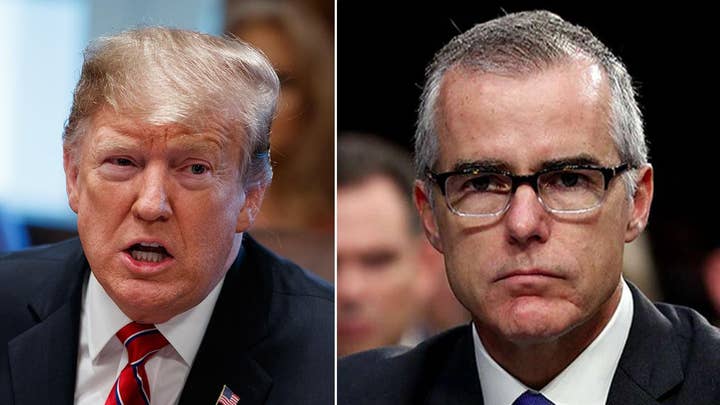 Democrats and many Republicans have said they believe that Mueller’s final report should be fully released. Barr has said that he will be as transparent as possible under Justice Department regulations, noting that regulations call for the report to be confidential, requiring only that the report explains the decisions to pursue or to decline prosecutions, which could be as simple as a short list, or a report of hundreds of pages.

After his confirmation hearing last month, Barr disclosed that he had discussed Mueller’s investigation with Vice President Pence, but insisted that he neither provided legal advice to the White House nor received any confidential information from Pence. Barr also defended a memo he sent to the Justice Department last year that was critical of the Russia probe, explaining that it was narrow in scope and based on potentially incomplete information.

Barr, though, said “it is vitally important” that Mueller be able to complete his Russia investigation.

“I believe it is in the best interest of everyone—the President, Congress, and most importantly, the American people—that this matter be resolved by allowing the Special Counsel to complete his work,” Barr said. “The country needs a credible resolution of these issues. If confirmed, I will not permit partisan politics, personal interests, or any other improper consideration to interfere with this or any other investigation.” 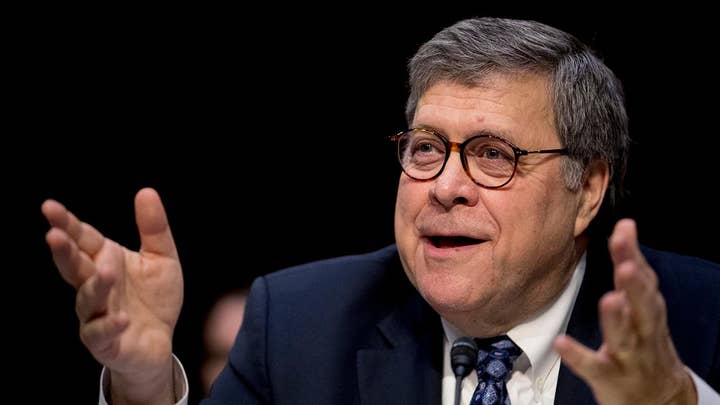 He added: “I can assure that, where judgments are to be made by me, I will make those judgments based solely on the law and will let no personal, political, or other improper interests influence my decision.”

Barr also maintained that he has known Mueller for decades, respects him, and believes he should be allowed to complete his work.

“I have the utmost respect for Bob and his distinguished record of public service,” Barr said. “When he was named special counsel, I said that his selection was ‘good news’ and that, knowing him, I had confidence he would handle the matter properly. I still have that confidence today.”

Barr also told senators that Trump did not seek any assurances or promises before nominating him. Trump has decried the Russia probe as a “witch hunt,” but Barr defended Mueller’s work.

“I don’t believe Mr. Mueller would be involved in a witch hunt,” Barr said at his hearing.

Trump had complained that Sessions, throughout his tenure as attorney general, was weak, and did not protect him from the Russia investigation. Sessions recused himself early on in the investigation, prior to Mueller’s appointment, due to his involvement with the Trump campaign in 2016.

In turn, Deputy Attorney General Rod Rosenstein took on oversight of the investigation and tapped Mueller as special counsel. Rosenstein is expected to leave his post at the Justice Department in the coming weeks.

Barr, though, has extensive experience in law enforcement, even beyond holding the post as attorney general under the Bush Sr. administration. Barr served as deputy attorney general and assistant attorney general overseeing the Office of Legal Counsel during that administration, covering work ranging from combatting violent crime to investigating the Pan Am 103 bombing. Barr also coordinated counter-terror activities during the first Gulf War, according to his biography.

Prior to joining the Justice Department, Barr worked with the White House Domestic Policy staff for a year under then-President Ronald Reagan. In the 1970s, Barr worked in the Central Intelligence Agency as an analyst and assistant legislative counsel. While he worked at the CIA, he studied law at George Washington University.