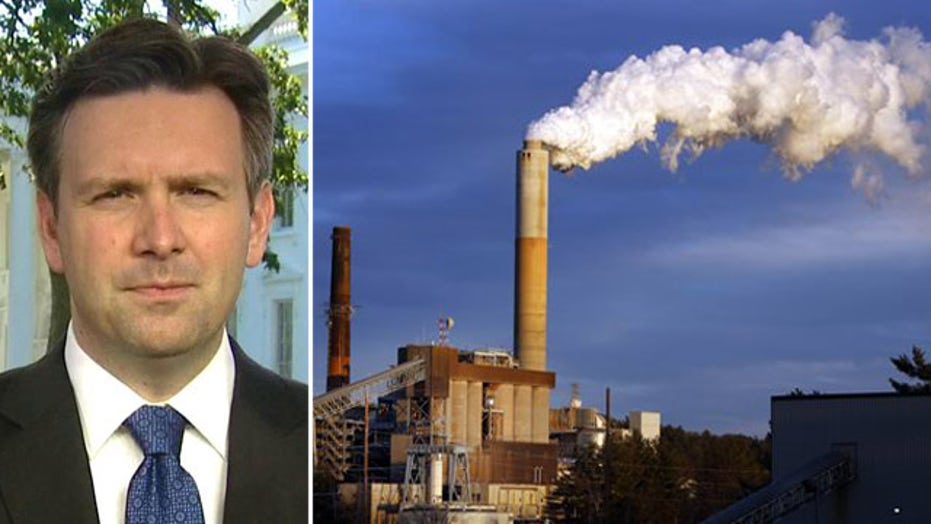 White House Press Secretary Josh Earnest, in an interview with Fox News, acknowledged that Biden has "indicated that he's thinking about it."

Without saying what he thinks the VP's decision should or would be, Earnest heaped praise on the former senator who has been at Obama's side since the 2009 inauguration -- and who could pose the biggest threat of any Democrat to primary front-runner Hillary Clinton.

Though Clinton served as Obama's secretary of state, the political and personal tension between the two first families is well-documented. On Monday, Earnest made no mention of Clinton. But he said Obama has described his running-mate selection of Biden as "the smartest political decision he's ever made."

He said Biden has a record of fighting for the middle class and building relationships around the world. He's been an "excellent vice president," Earnest said.

"Ultimately, he'll have to make up his own mind," he added.

The comments are the latest to fuel speculation about a Biden bid. While the vice president has made little public effort to build a campaign, he is -- as Earnest said -- apparently considering it as his political supporters await a decision.

Fox News also has learned that two longtime Biden confidantes have been brought on board as VP advisers.

Former senior adviser Mike Donilon has been brought on as a communications adviser, and former Delaware Sen. Ted Kaufman also is now an adviser; each has an office in the Eisenhower Executive Office Building, next to the White House. Kaufman has a long history with Biden, and was a top campaign adviser in 2008. Donilon worked on Obama's re-election campaign.

While there are strong suggestions the two were brought on to specifically help Biden during the period of his son's illness and death, they nevertheless have a political history with the vice president.

In another recent development, a top political aide to Biden's late son joined the super PAC working to recruit the elder Biden to run for president on Sunday.

Josh Alcorn, a longtime Democratic operative, had been former Delaware Attorney General Beau Biden's top political and fundraising adviser before he died of brain cancer in May. Alcorn will now work with the Draft Biden super PAC.

On Thursday, Fox News reported that Clinton aides were growing increasingly nervous about the possibility of a Biden run after the vice president's White House chief of staff was spotted having breakfast recently with major Democratic donor Louis Susman, a Clinton friend who served as U.S. Ambassador to the United Kingdom under Obama.

The New York Times reported Sunday that Biden had discussed entering the race with friends, family, and Democratic donors.

The Times also reported that before Beau Biden died, he tried to convince his father to run.

The speculation builds amid signs of trouble for Clinton, whose poll numbers betray some slack in her support and whose campaign has been dogged by the enthusiasm gravitating toward Vermont Sen. Bernie Sanders.

On Tuesday, the Democratic front-runner plans to air her first television ads of the campaign in the early voting states of Iowa and New Hampshire.

The ads will focus on Clinton's legal work on behalf of families and her relationship with her late mother Dorothy, central themes of her early campaign.

"After law school she could have gone to a big firm but instead went to work for the Children's Defense Fund. In Arkansas, she fought for school reform to change lives forever. Then as first lady she helped get health care for eight million kids," says a narrator in one of the ads. "You probably know the rest."

The ads would air ahead of the first official Republican primary debates, hosted by Fox News and Facebook, on Thursday.

Fox News' Ed Henry and Kelley Chernenkoff and The Associated Press contributed to this report.