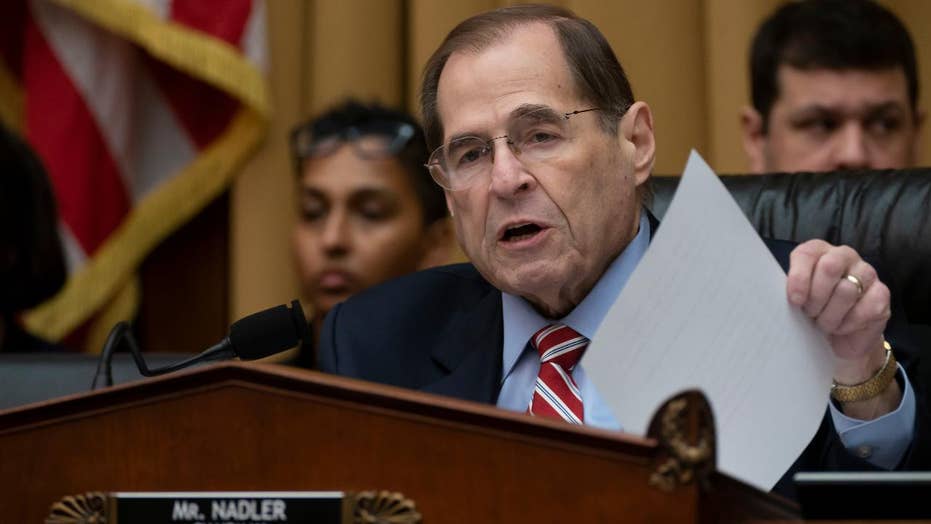 Rep. Jerry Nadler says he will give Attorney General Barr 'time to change his mind' before issuing subpoenas

House Judiciary Committee Chairman Jerrold Nadler on Thursday requested Special Counsel Robert Mueller appear before his committee “as soon as possible”—and no later than May 23.

Nadler’s request came prior to the Justice Department’s imminent release of Mueller’s report to Nadler’s committee, the Senate Judiciary Committee, and the American public.

“It is clear Congress and the American people must hear from Special Counsel Robert Mueller in person to better understand his findings. We are now requesting Mueller to appear before @HouseJudiciary as soon as possible,” Nadler tweeted Thursday.

Nadler also attached an image of the letter he sent to Mueller Thursday, requesting his testimony “as soon as possible—but, in any event, no later than May 23, 2019.”

“I look forward to working with you on a mutually agreeable date,” Nadler wrote to Mueller.

He added: "We cannot take Attorney General Barr's word for it. We must read the full Mueller report, and the underlying evidence. This is about transparency and ensuring accountability."

There was no immediate response from Mueller.

Nadler’s request for Mueller’s testimony came just moments after Attorney General Bill Barr addressed the press from the Justice Department. Barr affirmed that Mueller found no evidence of collusion between members of the Trump campaign and the Russians during the 2016 presidential election.

Barr said during the press conference that, later Thursday morning, he would transmit the special counsel’s report, which is expected to be more than 300-pages-long, to the chairmen and ranking members of both the House and Senate Judiciary Committees, and would post the full report to the Justice Department’s website for the American public to review.

Barr explained that the redactions were "compelled by the need to prevent harm to ongoing matters and to comply with court orders prohibiting the public disclosure of information bearing upon ongoing investigations and criminal cases."

But as the DOJ tangles with Congress over redactions, Barr vowed to make a less-redacted version available to certain lawmakers. Still, he said he will submit the first version at 11 a.m. ET Thursday, describing its redactions as "limited."

Barr vowed to work with Congress to "accommodate their legitimate oversight interests with respect to the Special Counsel's investigation."

"Given the limited nature of the redactions, I believe that the publicly released report will allow every American to understand the results of the Special Counsel’s investigation," Barr said. "Nevertheless, in an effort to accommodate congressional requests, we will make available to a bipartisan group of leaders from several Congressional committees a version of the report with all redactions removed except those relating to grand-jury information."

Barr explained that those members of Congress "will be able to see all of the redacted material for themselves – with the limited exception of that which, by law, cannot be shared," referencing grand jury material included in the report.

Despite Barr's promise, though, Nadler has already said that the committee will "very quickly" issue subpoenas for the full report, should he and his colleagues be unsatisfied with the amount of and basis for the redactions in the report released Thursday.

“We believe the only way to begin restoring public trust in the handling of the Special Counsel’s investigation is for Special Counsel Mueller himself to provide public testimony in the House and Senate as soon as possible,” they wrote.

Later, Pelosi tweeted: "AG Barr has confirmed the staggering partisan effort by the Trump Admin to spin public’s view of the #MuellerReport – complete with acknowledgment that the Trump team received a sneak preview. It’s more urgent than ever that Special Counsel Mueller testify before Congress."