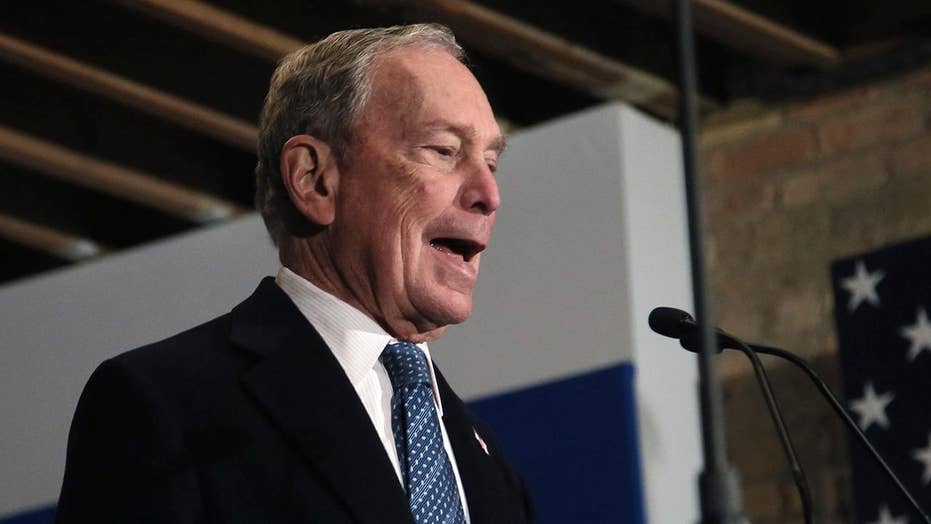 Michael Bloomberg forced to apologize for policies that saved lives.

Former New York City Mayor Michael Bloomberg's late entry into the Democratic presidential primary put him at a disadvantage compared to many candidates in the race. But the billionaire is using his vast fortune in an attempt to make up ground in Super Tuesday states, largely conceding the early states.

Bloomberg was laid off from his job at 39 years old before starting his own very successful company, through which he has racked up a net worth of over $60 billion, according to Forbes. After leaving his post as the New York City mayor (2002-2013), the Democrat-turned-Republican-turned-independent-turned-Democrat became involved in political philanthropy, particularly on gun control — he founded Everytown for Gun Safety in the wake of the Sandy Hook elementary school shooting.

Here is where Bloomberg stands on some of the issues that matter most to voters.

Bloomberg takes a less radical route on health care than some of his Democratic opponents by advocating for what he calls a "Medicare-like" public option rather than a "Medicare-for-All," scheme which would outlaw private health insurance.

Bloomberg's public option is similar to what former President Obama pushed to include in the Affordable Care Act, also known as ObamaCare, but did not have the votes in the Senate to pass.

While Bloomberg, unlike many other Democratic candidates, has not said whether or not he would allow illegal immigrants to be covered by government-run health programs, he does include several other elements in his health proposals.

He would institute price caps for drugs at 120 percent "of the average in other advanced nations," and put a cap on out-of-network medical bills at two times what the same services would cost through Medicare.

Bloomberg has been a major climate advocate and donor, ponying up large sums of cash to help various climate organizations. After President Trump withdrew from the Paris Climate Accords, Bloomberg "made up the funding gap at the U.N. Climate Change Secretariat," giving the organization $10 million.

Additionally, Bloomberg dropped $500 million in an effort to end the use of coal-fired power plants last year, donating it to the organization Beyond Carbon, according to The New York Times.

While it is unclear what his climate plan would cost taxpayers, Bloomberg has supported a Green New Deal similar to the proposed resolution from Rep. Alexandria Ocasio-Cortez, D-N.Y.

Bloomberg proposes a target date of 2050 for the United States to reach net-zero carbon emissions, which is on par with much of the Democratic field.

Bloomberg vows to increase the federal minimum wage to $15 per hour, like almost the entire Democratic primary field.

On taxes, the billionaire takes a more moderate stance than his primary opponents Sen. Elizabeth Warren, D-Mass., and Sen. Bernie Sanders, I-Vt., by not advocating for a wealth tax. A wealth tax is a levy on a person's or family's accumulated net worth rather than their income.

Warren, for example, would hit families worth over $1 billion for 6 percent of their wealth each year and fix a 2 percent levy on all families worth over $50 million. Bloomberg has said the policy "just doesn't work." He has said, however, that he plans to raise taxes on "wealthy people like me."

“I raised taxes, and it turned out very well,” Bloomberg said at an event in Phoenix last year. “In the end, people weren’t happy about a tax increase, but two years later, I did get reelected by a large amount.”

In other initiatives, Bloomberg says he will improve rural broadband access and "send billions of dollars to communities across the nation to help create jobs and grow incomes."

Bloomberg is a longtime supporter of a pathway to citizenship for illegal immigrants currently in the country, a policy that is supported by the vast majority of his primary rivals. He has also been a sharp critic of how Trump is handling the immigration issue.

"As president I will end Trump's attempts to demonize and scapegoat refugees and immigrants," Bloomberg tweeted in reaction to Texas' decision to no longer accept refugees earlier this month, a move that was put on hold by a federal court.

Additionally, he followed former New York City Mayor Rudy Giuliani's policy of ensuring, "confidentiality of immigration status for all people who interacted with the New York City government," so they would not be afraid to use city services. At the same time, however, Bloomberg has panned sanctuary cities that forbid their police departments from sharing immigration information with federal authorities.

According to the Washington Free Beacon, Bloomberg told MSNBC's Morning Joe in 2017, "You cannot (...) have everybody deciding which laws they should obey. The law is the law."

Marijuana activists have passionately spoken out against Bloomberg, who is the only Democratic presidential candidate to explicitly speak out against the legalization of marijuana.

He called legalization "perhaps the stupidest thing anybody has ever done" in early 2019, according to CNN. Most candidates are calling for the federal legalization of the drug while some others would like to continue with the current U.S. policy of keeping the drug illegal federally, giving states room to legalize marijuana within their own borders.

Like the rest of the Democratic field, Bloomberg is against the death penalty, previously calling it "murder by the state," according to NPR. Additionally, Bloomberg decried the Florida Supreme Court's decision in January to force felons to pay all their court-ordered fees before their right to vote is returned.

"If you've been incarcerated and served your time, you deserve to regain the fundamental right to vote," he tweeted.

This stance does not go quite as far as candidates Warren and Bernie Sanders', however, who have each indicated they are open to allowing felons to vote from behind bars.