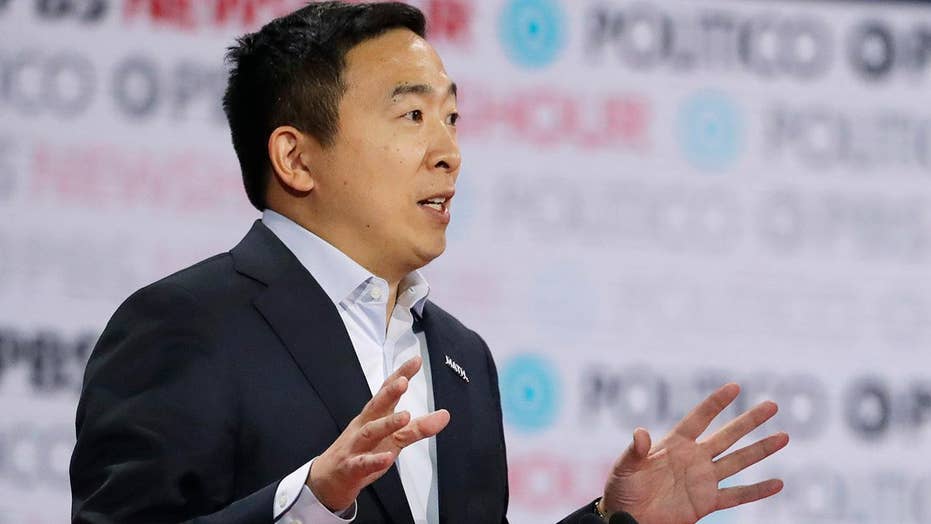 Andrew Yang, a former businessman and self-professed math geek, has generated significant buzz around his bid for the 2020 Democratic presidential nomination.

While he has struggled to rise to the top tier in polls and most recently failed to qualify for the January Democratic debate, Yang is supported by a vocal online legion dubbed the "Yang Gang" that champions the candidate and his unique policy ideas.

Here is where Yang stands on some of the issues that matter most to 2020 voters.

Yang finds a middle ground between some of the more moderate and far-left Democratic health care proposals by advocating "Medicare-for-All" but not to the total exclusion of all private insurance, as Sens. Elizabeth Warren, D-Mass., and Bernie Sanders, I-Vt., are pushing.

In this Dec. 5, 2019, photo, Democratic presidential candidate businessman Andrew Yang speaks during an interview with The Associated Press in Chicago. (AP Photo/Teresa Crawford)

"To be clear, I support the spirit of Medicare for All, and have since the first day of this campaign," Yang writes on his website. "I do believe that swiftly reformatting 18 percent of our economy and eliminating private insurance for millions of Americans is not a realistic strategy, so we need to provide a new way forward on health care for all Americans."

Ever the outside-the-box thinker, Yang doesn't stop at how he would insure Americans. His website also mentions price-controls on prescription drugs, waste cutting and changing how American health care is thought of in the United States to focus more on "crucial aspects of wellbeing" in order to address "underlying problems" with the system.

Like most of the Democratic field, however, Yang would allow government-financed health plans to cover illegal immigrants.

Not a member of Congress, Yang has not had the chance to co-sponsor or vote for Rep. Alexandria Ocasio-Cortez's Green New Deal resolution. He does, however, support the concept that climate change is a grave threat that must be dealt with in an ambitious way.

"Climate change is an existential threat facing our society and we need to make changes in order to save our country and the planet," he tweeted in December.

Fox Business reported that Yang's climate change plan would cost $4.9 trillion, which is significantly higher than the price tag on agendas proposed by fellow candidates Warren, Pete Buttigieg and Joe Biden. It pales in comparison, however, to the cost of Sanders' proposal, which would run taxpayers $16 trillion.

Though his climate change agenda is both expansive and expensive, Yang takes a pragmatic stance on two major climate issues Democrats are debating. He sets 2050 as the target date for the U.S. to reach net-zero carbon emissions, in line with most of the field but later than what some other candidates have proposed. He also would not ban fracking--a controversial method of extracting natural gas from underground--outright as some other Democrats would.

The economy and fiscal issues are what Yang is holding up as the centerpiece of his campaign. Particularly, Yang pushes a $1,000 per month Universal Basic Income, or UBI, to be given to all American adults. He calls it the "Freedom Dividend."

Yang justifies his unique UBI proposal by citing successful examples of the policy from other countries -- though they were all on a much smaller scale than what Yang wants in the U.S. Additionally, Yang references technological advances like automation and green energy, which are putting many Americans who work blue-collar jobs out of a job, as reasons why a UBI is important.

This pitch is likely aimed at Obama-Trump voters in the Rust Belt who handed the 2016 election to the president in states like Pennsylvania and Wisconsin.

While Yang has not proposed a specific corporate income tax hike like many of his fellow candidates, he has railed against big companies that end up paying no income tax by the end of the year. He specifically slammed Amazon for this last summer, as many Democrats have proposed closing tax loopholes that allow companies like Amazon to avoid paying federal taxes.

"It [a UBI] is difficult to do if you have companies like Amazon, trillion-dollar tech companies, paying literally zero in taxes while they're closing 30 percent of our stores," Yang said.

He also says he would impose a 10 percent Value Added Tax and hike taxes on capital gains and carried interest.

Despite his other rather novel schemes, Yang takes notably moderate positions on a wealth tax and the minimum wage. He has not said he would institute a wealth tax, which levies a certain percent of the net worth of very rich individuals per year, as Warren, Sanders and others have. He also supports allowing states to set their own minimum wages, unlike the vast majority of the Democratic field, which wants to raise the federal minimum wage to $15 per hour.

The current federal minimum wage is $7.25 per hour.

Yang has bashed President Trump's immigration rhetoric like the rest of the primary candidates, but, like with the rest of his platform, he focuses more on the solutions than deriding the problem.

"Immigrants contribute massively to our economy," he tweeted in August. "Scapegoating them for the problems of automation misses the point. We need to solve the real problems and create a path forward for all Americans in the 21st Century Economy."

Like many Democrats, Yang supports a pathway to citizenship for illegal immigrants currently in the country and the DREAM Act, which protects young people who were brought to the U.S. by their parents before they turned 18.

He does, however, break with them on border security, allowing for physical border barriers in some cases. Yang writes on his website that he would, "work with border security experts, immigrant advocates, and the Mexican government to provide effective, secure, humane border security."

Additionally, Yang takes a stance that mirrors what many Republicans say about immigration, which is that the U.S. should "allow significantly more highly skilled individuals and top-of-their-class students to study and work here."

This focus on highly-skilled immigrants breaks with what most Democrats prefer to pay attention to, which are refugees and workers with fewer skills from poor countries.

Yang would legalize marijuana federally, providing relief to workers in the cannabis industry who live under constant threat of a federal crackdown under current law. This is in line with what most members of the primary field would do on the issue.

With his young and enthusiastic "Yang Gang" at his back, marijuana legalization is one of the issues Yang puts at the top of his criminal justice agenda, right after reducing mass incarceration. His campaign even sells green knit caps with a pot leaf on one side and Yang's popular "MATH" slogan -- which stands for "Make America Think Harder" -- on the other.

Like almost the entirety of the Democratic field, Yang is against the death penalty and supports restoring voting rights to felons after they have served their prison terms. Yang does not go as far as Sanders and Warren, however, to say that individuals convicted of a felony should be able to vote from behind bars.