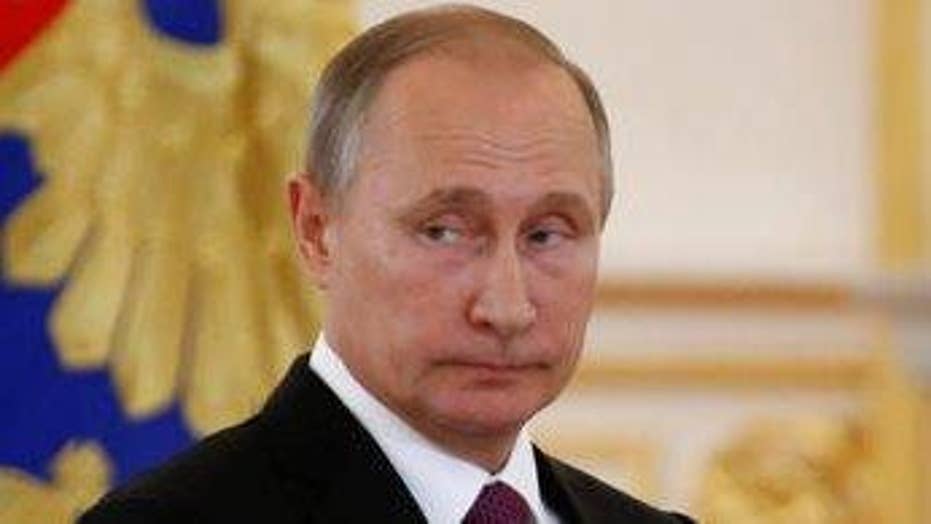 New questions over if Russia was really involved in hacking

President Obama has received a much-anticipated classified report on alleged Russian and other foreign meddling in American elections, heightening interest in what evidence the file contains as Republicans spar over the cyberattack claims – and wait for their chance to see the findings themselves.

Director of National Intelligence James Clapper and other top intelligence officials visited the White House Thursday afternoon, to brief the president on the materials.

President-elect Donald Trump is to be briefed on the report on Friday.

Clapper also testified before the Senate Armed Services Committee that they plan to brief Congress and release an unclassified version of the report to the public “early next week.”

In its earlier assessment, the intelligence community said Moscow interfered in the election to help Trump win.

"We stand actually more resolutely on the strength of that statement than we did on the 7th of October," Clapper said.

The administration’s allegations of Russia-directed hacking of Democratic organizations during the 2016 U.S. elections – and punitive measures taken against Russian officials and agencies last week – continue to drive fierce debate in Washington, especially among Republicans.

Trump and his allies have cast doubt on the claims. The latest detail to raise questions is confirmation from the Democratic National Committee that the FBI did not examine their servers.

A spokesman confirmed to Fox News that “the FBI never requested access to the DNC's computer servers,” though the DNC had several meetings with FBI and other officials during the investigation. BuzzFeed first reported the FBI did not inspect the servers before issuing their report.

That 13-page report, issued with the Department of Homeland Security, also has faced some scrutiny for being light on hard evidence confirming Russian government involvement.

The report sent to Obama – and soon to be shared with Trump and others – could offer more.

Trump tweeted earlier this week that it was “very strange” his briefing on Russia hacking will not be held until Friday. He speculated, “perhaps more time needed to build a case.” Intelligence officials said there had been no delay.

Trump also has drawn attention to WikiLeaks founder Julian Assange’s recent interview on Fox News’ “Hannity” in which Assange insisted the Russians were not his source for thousands of hacked emails from Hillary Clinton campaign chairman John Podesta.

Some Republicans, though, have made clear they harbor few doubts about Russia’s cyber-meddling -- and do not see Assange as a reliable source.

Senate Armed Services Committee Chairman John McCain, R-Ariz., said at Thursday’s hearing that he believes Assange is responsible for publishing names of individuals who work with the U.S. government and putting them at risk.

Clapper said, “Yes, he has,” adding that he does not find Assange to be credible.

McCain also said Thursday that "every American should be alarmed" by Russia's alleged meddling in the 2016 presidential election.

There is "no escaping the fact that this committee meets today for the first time in this new Congress in the aftermath of an unprecedented attack on our democracy," he said.

In prepared testimony Thursday, intelligence officials said Russia poses a major and growing threat to U.S. government, military, diplomatic and commercial operations -- as well as America's critical infrastructure. Russia is among at least 30 nations that are developing capabilities to launch cyberattacks, according to their statement. Clapper on Thursday stood by claims that the Russian government was involved in the 2016 hacking.

In new tweets early Thursday, Trump backed away from Assange somewhat. He blamed the "dishonest media" for portraying him as agreeing with Assange.

Accusations Russia interfered in the 2016 election by hacking Democratic email accounts have roiled Washington for weeks. Obama struck back at Moscow in late December with penalties aimed at Russia's leading spy agencies, the GRU and FSB, that the U.S. said were involved. The GRU is Russia's military intelligence agency. The FSB is the main successor to the Soviet-era KGB.

But Trump easily could rescind the sanctions. So far, he has publicly refused to accept the conclusion that Russia is responsible for the attacks. Trump suggested Wednesday in a tweet that one of Russia's primary targets, the Democratic National Committee, could be to blame for being "so careless."

CIA Director John Brennan said in a Dec. 16 message to employees that the FBI agreed with the agency's conclusion that Russia's goal was to support Trump in the election. Brennan wrote that he also had spoken with Clapper and said "there is strong consensus among us on the scope, nature, and intent of Russian interference in our presidential election."

Moscow has denied the hacking allegations and dismissed Obama's sanctions as an attempt to "harm Russian-American ties." Although Russian President Vladimir Putin rebuked the Obama administration for trying to punish Russia, he said his country would not immediately retaliate and would instead wait for a new U.S. approach after Trump takes office.