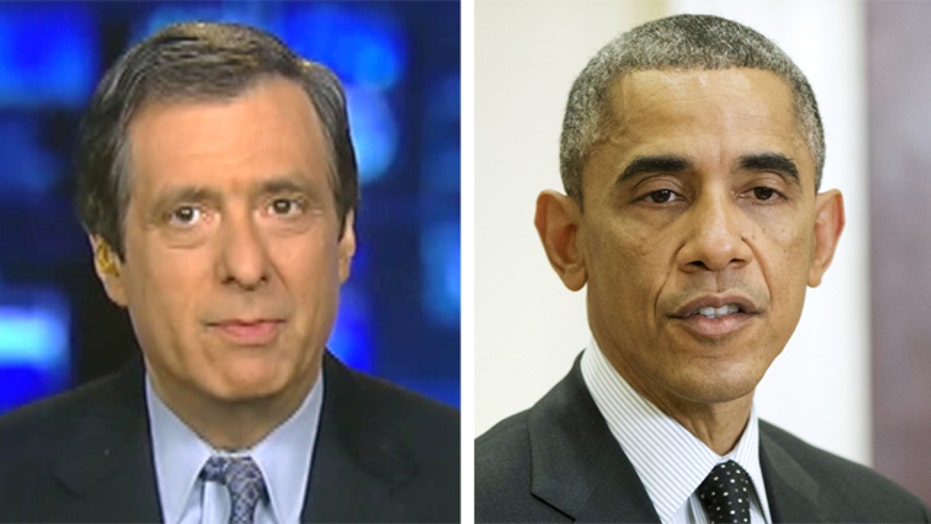 Kurtz: Obama needs more than bourbon to work with GOP

During the 73 minutes in which Barack Obama spoke to reporters, he seems to have made no one happy.

He wouldn’t call the elections a “shellacking” or provide any headline-worthy phrase at all. He kept talking about the two-thirds of the country that didn’t vote, so as to minimize the impact of the midterms. He said he would spend more time with Mitch McConnell and John Boehner but didn’t sound especially eager. And he still plans to hurl a thunderbolt in the form of an executive order on immigration.

So the verdict of the insta-pundits is, well, he just doesn’t get it.

Earlier, Mitch McConnell had struck a bipartisan tone in saying that voters had opted for divided government but wanted both parties to work together. John Boehner was a bit more combative yesterday, saying that “finding common ground is going to be hard work” and that if he acts unilaterally on immigration, Obama will “poison the well.”

What we have here is a typical Washington minuet. Each man wants to convey that he’s ready to rise above politics and do what’s best for the country—it’s the other side that seems mired in partisanship. Each is mouthing the language of compromise while trying to signal to his base that he’ll be sticking to principle.

Obama may be willing to share some Kentucky bourbon with McConnell, but he offered little more than a willingness to listen to GOP ideas and accept the ones he likes.

Had Obama sounded more conciliatory, his remaining liberal constituency would have been nervous that he’s going to give away the store. Had he backed away from his already-delayed pledge to do something about immigration, he would have faced a Hispanic revolt.

But the net result is that the president appeared somewhat in denial over losing control of the Senate. He didn’t take the bait when the AP’s Julie Pace asked, “Do you feel any responsibility to recalibrate your agenda?”

As Washington Post columnist Dana Milbank wrote, “he spoke as if Tuesday had been but a minor irritation.” Kind of like spending too much time on hold with customer service.

McConnell is a dealmaker who, working with Joe Biden, helped steer the country off the fiscal cliff. Boehner also knows how to wheel and deal, but has been undermined by his Tea Party wing in negotiating with Obama (though he’ll now have more margin for error with a swollen majority).

Still, the media consensus was that the president had blown it.

National Journal’s Ron Fournier writes: “Shellacked and thumped by an angry electorate, President Obama declared to every American who voted in Tuesday's elections—and to those who've checked out of the political process—‘I hear you.’

“And then he ignored them.

“From all appearances Wednesday, the president won't change—not his policies, not his style, not his staff, not nothing.”

Fournier is still pining for a big-time staff shakeup.

“What he said: ‘So, to everyone who voted, I want you to know that I hear you. To the two-thirds of voters who chose not to participate in the process yesterday, I hear you, too.’

“What he meant: Republicans, don’t even try to pull the ‘mandate’ card on me. Hardly anybody voted in this election.

“Translation: Obama and his senior aides are working hard to make sure no sweeping conclusions are drawn from the Senate power shift.

“There are two Americas, senior officials like to say: a midterm America and a presidential election-year America. Despite the demands from many pundits, Republicans and even Democrats for a White House course correction, the president gave no indication that he would do so.”

So what are the chances for actual cooperation?

There’s a small window—maybe till next summer—before the 2016 campaign drowns out everything else.

After six years of a dysfunctional relationship, Obama and congressional Republicans don’t trust each other. The president hasn’t done much about reaching out to Democrats, either. In fact, as the post-election stories make clear, Harry Reid and his Democrats are ticked off at Obama and blame him for the electoral wipeout.

Even when the atmosphere is less toxic than it is today, it is very, very difficult to get legislation through the byzantine maze of Capitol Hill.

Congressional reporters often overestimate the chances for compromise. Gangs get formed, backrooms get filled, staffers leak details, and it often sounds like something is happening. Yet in the end it gets derailed. Remember all those stories after the 2012 election about how the Republicans would have to give in on immigration reform? Never came close to happening.

I hope I’m wrong. It would be nice to live in a city that produces more than just empty rhetoric. The country is angry and wants these people to stop feuding and get something done.

But it will take more than a few shots of bourbon for that to happen.