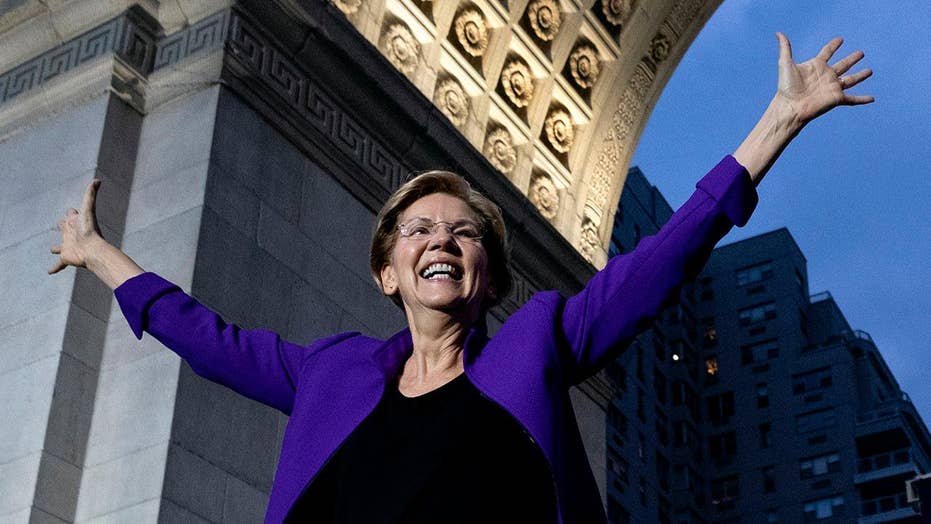 A slew of polls in recent days indicate the battle for the 2020 Democratic presidential nomination is now a two-candidate face-off between former Vice President Joe Biden and Massachusetts Sen. Elizabeth Warren, as Vermont Sen. Bernie Sanders slips to a distant third.

Warren – the populist senator who’s pushed out one progressive policy proposal after another – stands at 27 percent among Democratic voters and independents who lean Democratic in a Quinnipiac University poll released Wednesday morning, with the former vice president commanding 25 percent. Warren’s two-point edge is well within the survey’s margin of error.

"After trailing Biden by double digits since March in the race for the Democratic nomination, Warren catches Biden," Quinnipiac University Polling Analyst Tim Malloy said. "We now have a race with two candidates at the top of the field, and they’re leaving the rest of the pack behind."

Going beyond the poll’s topline numbers, Malloy noted that if you “dig a little deeper…the reasons behind Warren's rise become more clear. She generates a lot of excitement as a potential nominee. On top of that, half of Democrats want a presidential candidate that supports big changes - even if it means things are harder along the way."

South Bend, Indiana Mayor Pete Buttigieg stands at 7 percent in the new Quinnipiac poll, with Sen. Kamala Harris of California at 3 percent. Everyone else in the record-setting field of Democratic presidential contenders registered at 2 percent or less.

Many political analysts downplay the results of national polls, pointing to the fact the race for the presidential nomination is a battle for the states and their delegates to the parties' nominating conventions. But the Quinnipiac results follow similar findings in polls released the past couple of days in Iowa, New Hampshire, and Nevada, the first three states to vote in the presidential primary and caucus nominating calendar.

Warren stands at 27 percent among likely Democratic presidential primary voters in New Hampshire in a Monmouth University survey released Tuesday, with Biden at 25 percent. Warren’s 2-point edge is well within that survey’s sampling error. Sanders is in third in the poll, at 12 percent.

A couple of hours after the release of the Monmouth poll in New Hampshire, a new survey in Nevada, which holds its caucus following the New Hampshire primary, also indicates a close contest between Biden and Warren.

A USA Today/Suffolk University survey put Biden at 23 percent, Warren at 19 percent and Sanders at 14 percent.

And in Iowa, a Des Moines Register/CNN/Mediacom poll released this past weekend indicated Warren at 22 percent, Biden at 20 percent and Sanders a distant third at 11 percent. The Des Moines Register surveys have long been considered the gold standard in Iowa polling.

The release of the surveys come as Warren’s campaign on Tuesday announced they’re spending a whopping $10-million to run digital and TV ads over the next few months in Iowa, New Hampshire, Nevada, and South Carolina, which votes fourth in the nominating calendar and holds the first southern primary.

The release of these new live telephone operator polls comes with just over four months to go until the first votes in Iowa. But that can be an eternity in campaign politics.

Warren continues to downplay her surge in the surveys, telling reporters a few days ago that, “I don’t do polls. We are still months away from the Iowa caucuses and the first primary elections.”

The pollsters agree. Monmouth University Polling Institute director Patrick Murray noted that “it is important to keep in mind that the race is still very much in flux.”

The Quinnipiac University poll was conducted September 19-23, with 1,337 registered voters nationwide – including 561 self-described Democratic voters independents who lean towards the Democrats – questioned by telephone. The sampling error for the survey Democratic nomination questions is plus or minus 4.9 percentage points.