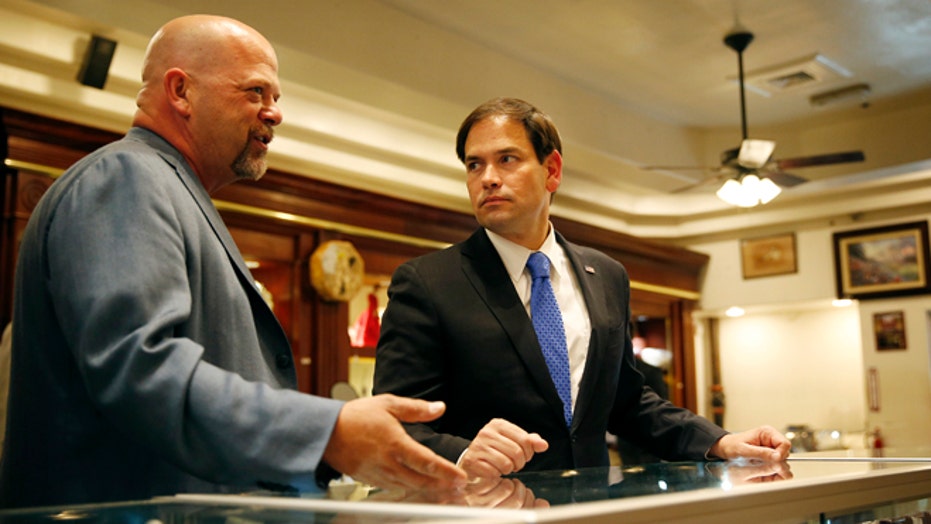 LAS VEGAS (AP) – Tourists and shoppers idled outside the World Famous Gold & Silver Pawn Shop on Thursday, while the setting of the reality show "Pawn Stars" hosted an even odder spectacle: the 2016 Republican presidential campaign.

Inside, Rick Harrison, the bullet-headed star of the History Channel show, led Florida Sen. Marco Rubio to a small scrum of reporters and television cameras crammed into the back of the shop, where the Picassos and Chagalls hang.

"This is a great guy right here," Harrison said of Rubio. "I'm good at reading people — you've seen my show — and this guy honestly cares about people."

Campaigning in Las Vegas can verge on the surreal, and Rubio's quick swing through town to celebrate his 44th birthday met that criteria. In the pawn shop — sandwiched between two bail bond outlets on a gritty stretch of Las Vegas Boulevard — Rubio admired a Super Bowl ring as he ambled through the narrow space, past gold records, Elvis posters and display cases full of knives and fancy jewelry.

Rubio tied the success of "Pawn Stars" into his campaign theme. "In almost any other country in the world, this story would have been impossible — both mine and his," Rubio, a son of Cuban immigrants who once worked in a Las Vegas casino, said as he stood with Harrison.

Hours later, Rubio celebrated his birthday at a private party at Harrison's five-bedroom, 4,600-square-foot home in a comfortable neighborhood at the northwestern edge of Las Vegas' sprawl. Attendees were asked to donate at least $1,000 to Rubio's campaign.

Because this is a presidential campaign, there was partisan counter-programming. Democrats tried to get in on the pop-culture game by circulating online memes claiming Rubio is trying to "pawn off" old Republican ideas.

Three high school students stood outside Rubio's fundraiser, hoping to talk to the candidate, who has been targeted by immigration activists for his changing stances on the issue. But when Rubio emerged from an SUV, all the teenagers did was shout, "Happy Birthday, Marco Rubio!" The senator waved back.

Rubio spent six years of his childhood in Las Vegas, and Nevada is both a pivotal early-voting state in the competitive GOP primary and a critical swing state in the general election. The Florida senator has a more sober schedule Friday: a tech start-up round-table in Las Vegas followed by a meeting with conservative activists in Reno.

Rubio said he'd be spending plenty of time in Nevada in the coming months, and was open about the main reason he was there Thursday.

"We're going to do what we've been doing, and we'll probably do for the next year — raise money," Rubio told reporters at the pawn shop. "All these people you work for charge us money to run commercials."