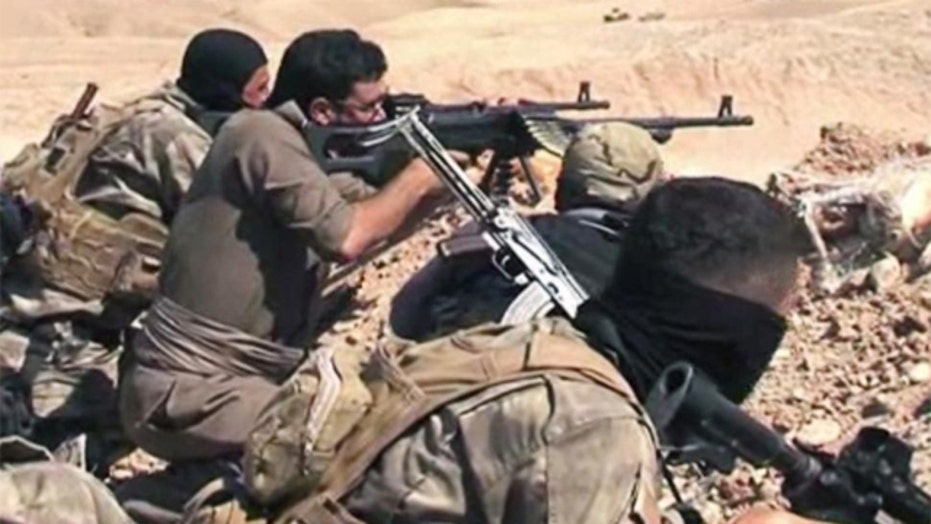 Kurdish fighters on the offensive against ISIS

The United States is sending weapons to Kurdish forces in Iraq who have begun to roll back gains made by Sunni militants, a senior U.S. official confirmed to Fox News.

A senior State Department official told The Associated Press that the Kurds are "getting arms from various sources. They are being rearmed."

Providing weapons to Kurdish forces is a reversal of U.S. policy, which previously had only allowed for selling arms directly to the Iraqi government. In recent days, the U.S. military has been helping facilitate weapons deliveries from the Iraqis to the Kurds, providing logistical assistance and transportation to the north.

Sources say the weapons from the U.S. will not be provided directly from the Pentagon. Officials wouldn't say which agency is spearheading the effort, though the CIA historically has done similar arming operations.

State Department spokeswoman Marie Harf noted that the administration previously mentioned the new arms deliveries, which she suggested are being made to contend with the "heavy weaponry" obtained by Islamic militants.

"The Kurds need additional arms and we're providing those," she said in a statement.

The move to directly aid the Kurds underscores the level of U.S. concern about the Islamic State militants' gains in the north, and reflects the persistent administration view that the Iraqis must take the necessary steps to solve their own security problems.

Kurdish forces have proven to be the most effective fighters against the Islamic State (IS), the militant group formerly known as ISIS. On Sunday, with the help of U.S. airstrikes, Kurdish forces pushed the militants out of the northern Iraq villages of Makhmour and al-Gweir, some 27 miles from Irbil. President Obama authorized the airstrikes to protect U.S. interests and personnel in the region, including at facilities in Irbil, as well as Yazidi refugees fleeing militants.

U.S. Defense Secretary Chuck Hagel, speaking to reporters in Sydney, said the airstrikes "have been very effective from all the reports that we've received on the ground." He declined to detail how or when the U.S. might expand its assistance to Iraq, or if military assessment teams currently in Baghdad would be moving to a more active role advising the Iraqi forces.

"We're going to continue to support the Iraqi security forces in every way that we can as they request assistance there," Hagel said during a press conference with Australian Defense Minister David Johnston. Hagel and Secretary of State John Kerry are in Sydney for an annual meeting with Australian defense and diplomatic leaders.

At the same time, the administration is watching carefully as a political crisis brews in Baghdad.

Kerry urged the people of Iraq to remain calm amid the political and military upheaval and said there should be no use of force by political factions as Iraq struggles form a government. He said the people of Iraq have made clear their desire for change and that the country's new president is acting appropriately despite claims of malfeasance by Prime Minister Nouri al-Maliki.

Maliki is resisting calls to step down and says he'll file a complaint against the president for not naming him prime minister.

Kerry noted that Maliki's Shia bloc has put forward three other candidates for the prime minister job and says the U.S. stands with the new president, Fouad Massoum.

Maliki has accused Massoum of violating the constitution because he has not yet named a prime minister from the country's largest parliamentary faction, missing a Sunday deadline.

"We believe that the government formation process is critical in terms of sustaining the stability and calm in Iraq," Kerry said. "And our hope is that Mr. Maliki will not stir those waters."