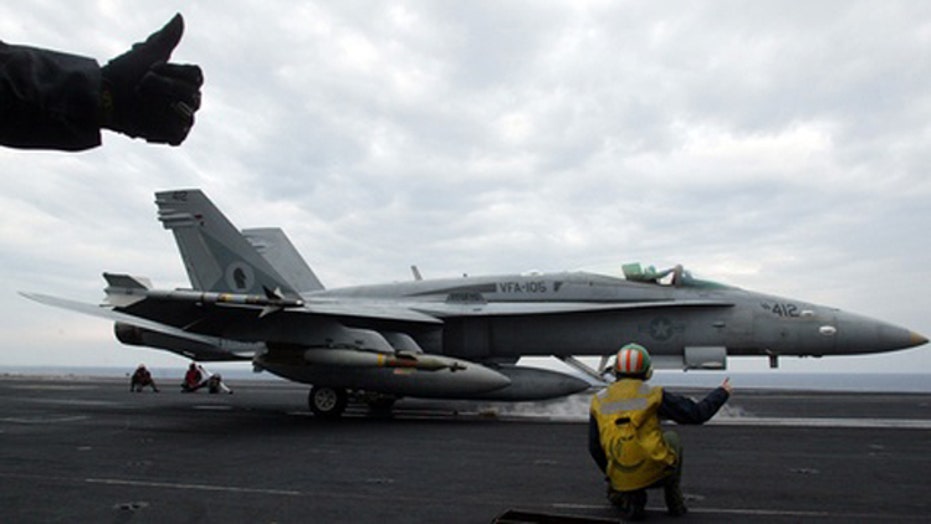 The U.S. conducted a second airdrop of food and water for thousands of refugees trapped in Iraq's Sinjar mountains early Saturday after launching airstrikes in northern Iraq against Islamic militants.

The chief spokesman for the Pentagon, Rear Adm. John Kirby, says that three planes dropped 72 bundles of supplies for the refugees. Included in the aid were more than 28,000 meals and more than 1,500 gallons of water.

On Friday, the U.S. military launched two more rounds of airstrikes against Islamic militants in northern Iraq, taking out two mortar positions and a seven-vehicle convoy, the Pentagon said.

The strikes came just hours after American fighter jets struck an artillery site -- the first military action in Iraq since President Obama authorized the use of force to protect U.S. personnel as well as Iraqi civilians facing a possible "genocide."

Kirby said the U.S. launched the latest airstrikes to help defend the city of Irbil, where U.S. personnel are "assisting the government of Iraq."

He said a drone struck a terrorist mortar position, and when Islamic militant fighters returned to the site moments later, "the terrorists were attacked again and successfully eliminated."

Senior military officials said the planes in this round of strikes, like those in the first, were launched from the USS George HW Bush in the Persian Gulf. The drone took off from an undisclosed land base and used hellfire missiles to strike its targets.

In announcing the first round of strikes earlier Friday, Kirby said two F/A-18 jets dropped 500-pound bombs on a piece of artillery and the truck towing it. The Pentagon said the military conducted the strike at 6:45 a.m. ET, against terrorists with the Islamic State (IS), the group formerly known as ISIS.

“As the president made clear, the United States military will continue to take direct action against [IS] when they threaten our personnel and facilities,” Kirby said.

The strike took place near the city of Irbil, after IS used the artillery to shell Kurdish forces defending the city.

The strikes came after Obama announced late Thursday he has authorized limited military force to defend American personnel in the region and to protect civilians stuck on a mountain outside the city of Sinjar.

They mark the deepest U.S. engagement in the country since the troop withdrawal in late 2011.

On Thursday, the military also conducted its first mission to airdrop humanitarian aid to thousands of Iraqi civilians on the mountain. Kirby later said 62 of the 73 pallets dropped got to the right people but 11 were unaccounted for and may have fallen into IS hands.

The president warned that the civilians face a potential genocide at the hands of IS militants. He stressed that combat troops will not be returning to Iraq, but said America has an obligation to help.

“When we have the unique capabilities to help avert a massacre, then I believe the United States of America cannot turn a blind eye,” Obama said. “We can act, carefully and responsibly, to prevent a potential act of genocide.”

One senior military official said the strikes and any that follow are "targets of opportunity." In the first round, militants were observed firing artillery indiscriminately toward Irbil. U.S. observers made the decision to strike back. Officials say there will probably be more humanitarian aid drops, though it is unclear when.

The military action won bipartisan praise from members of Congress, though Republicans urged the administration to do more and said the president has delayed for too long.

"The president is right to provide humanitarian relief to the Iraqi civilians stranded on Mount Sinjar and to authorize military strikes against ISIS forces that are threatening them, our Kurdish allies, and our own personnel in northern Iraq," Sens. John McCain, R-Ariz., and Lindsey Graham, R-S.C., said in a statement. "However, these actions are far from sufficient to meet the growing threat that ISIS poses. We need a strategic approach, not just a humanitarian one."

They called for strikes against IS leaders and positions in Iraq and Syria.

House Speaker John Boehner called for a "long-term strategy." Rep. Frank Wolf, R-Va., who has been among the most outspoken lawmakers regarding the plight of religious minorities in Iraq, called the developments a "positive first step," but said they "can't be the only steps."

White House Press Secretary Josh Earnest said Friday there was no "specific end-date" to the campaign, but reiterated "what is not contemplated here is the introduction of American troops in a combat role to alleviate this situation."

The president outlined two scenarios for possible airstrikes. He said he has authorized strikes “if necessary” to help Iraqi forces break the siege of the civilians on the mountain, and protect the people trapped there. He also said he’s directed the military to take “targeted strikes” against IS terrorists if their convoys move toward the city of Irbil, where the U.S. has a consulate and U.S. military personnel advise Iraqi forces.

“We intend to stay vigilant and take action if these terrorist forces threaten our personnel or facilities anywhere in Iraq,” Obama said.

The apparent impetus for the turnaround, though, was the plight of tens of thousands of people from the ancient Yazidi minority, who were forced to flee the northwestern town of Sinjar after militants took over.

According to the U.N., between 35,000 and 50,000 fled to nearby Mount Sinjar and other areas, and for the last several days they have been without adequate food and water.

“They’re without food, they’re without water. People are starving, and children are dying of thirst,” Obama said. He said they face a “horrible choice”: descend the mountain and be slaughtered by IS militants or stay and “slowly die of thirst and hunger.”

The aid mission Thursday involved C-130 and C-17 cargo aircraft. They were escorted by F-18 fighters, and all aircraft have since safely left the immediate airspace over the drop area.

Officials said they dropped 72 bundles of supplies, including thousands of gallons of water.

The crisis in Iraq has escalated sharply in recent days, though militants have steadily been making advances across the country’s north for months.

IS seized control Thursday of the country's largest Christian city, Qaraqoush. The militants told its residents to leave, convert or die, which sent tens of thousands of civilians and Kurdish fighters fleeing from the area, according to several priests in northern Iraq.

A week earlier, IS seized Sinjar, triggering what has since become a humanitarian crisis on the mountaintop.