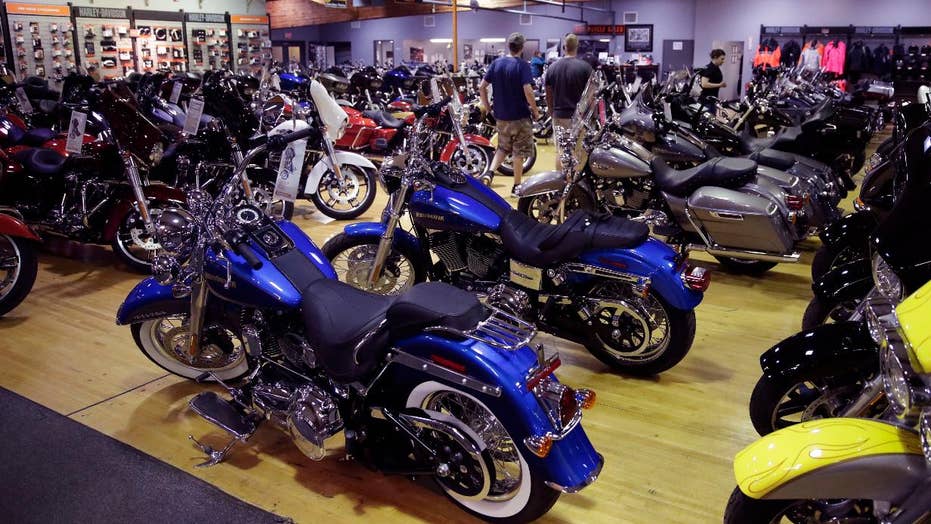 Harley-Davidson will move some production overseas due to tariffs

FBN’s Jeff Flock discusses how Harley-Davidson is moving some of its production overseas.

President Trump warned Harley-Davidson on Tuesday that if the company follows through on moving production of motorcycles sold in Europe overseas, "it will be the beginning of the end" -- while saying the American icon would not be able to “sell back into the U.S. without paying a big tax."

“Companies are now coming back to America. Harley must know that they won’t be able to sell back into U.S. without paying a big tax!” Trump tweeted.

Minutes later, the president tweeted that Harley-Davidson employees and customers were "very angry."

"A Harley-Davidson should never be built in another country-never! Their employees and customers are already very angry at them. If they move, watch, it will be the beginning of the end - they surrendered, they quit! The Aura will be gone and they will be taxed like never before!" Trump tweeted.

Harley-Davidson on Monday announced the company would move production of European-sold motorcycles abroad to avoid the increased tariffs imposed on American imports. The European Union's decision to place tariffs on various U.S. products was in retaliation to the Trump administration’s move to impose tariffs on all European steel and aluminum imports to the U.S.

Harley-Davidson announced it will move some production of European motorcycles to the EU to avoid tariffs. (AP)

“Increasing international production to alleviate the EU tariff burden is not the company’s preference, but represents the only sustainable option to make its motorcycles accessible to customers in the EU and maintain a viable business in Europe,” the company said in a statement.

Trump slammed the Milwaukee-based motorcycle company on Monday for waving a “white flag” with the EU.

“Early this year Harley-Davidson said they would move much of their plant operations in Kansas City to Thailand. That was long before Tariffs were announced. Hence, they were just using Tariffs/Trade War as an excuse. Shows how unbalanced & unfair trade is, but we will fix it….” Trump tweeted early Tuesday, after suggesting Monday that “taxes” were “just a Harley excuse,” urging the company to “be patient!”

Minutes later, Trump tweeted that the U.S. was “expanding” its “footprint” in the global trade market, warning countries to “play fair” or “pay tariffs.”

“…We are getting other countries to reduce and eliminate tariffs and trade barriers that have been unfairly used for years against our farmers, workers and companies. We are opening up closed markets and expanding our footprint. They must play fair or they will pay tariffs!” Trump tweeted.

Trump, in March, instituted a tariff of 25 percent on steel and 10 percent on aluminum imports. The tariffs became effective in mid-March, with exclusions for Mexico, Canada and the EU.

But last month, the Trump administration slapped the tariffs on allies Mexico, Canada and the EU, prompting the retaliatory tariffs on U.S. goods.

The administration’s move to impose the tariffs came after a nine-month investigation, led by Commerce Secretary Wilbur Ross, which found the current level of aluminum and steel imports to the U.S. had the “potential to threaten our national security.”