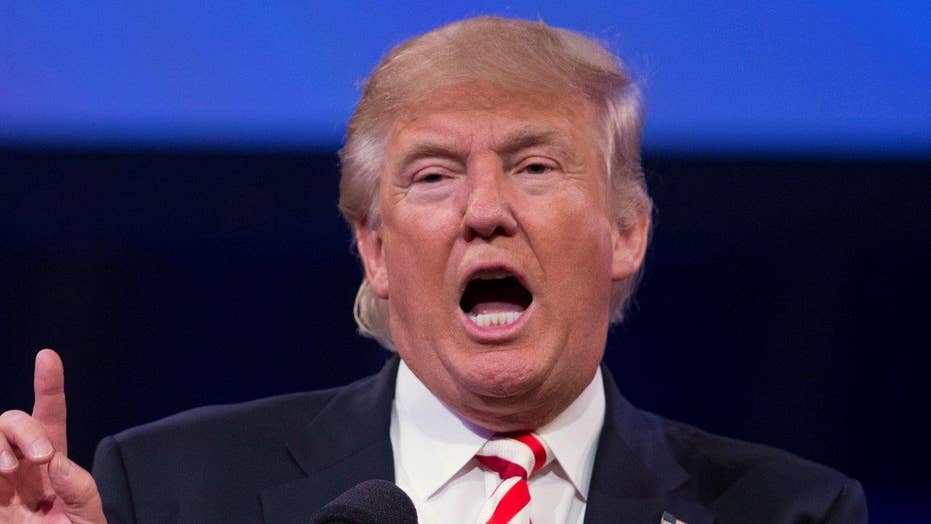 Trump: We need to strengthen our respect for America

Donald Trump vowed Thursday to “rebuild our depleted military” and ensure America’s soldiers are the best-equipped in the world as he addressed the American Legion's annual convention – and sought to rebut Hillary Clinton’s suggestion to the same crowd a day earlier that he doesn’t believe America is “exceptional.”

Kicking off the address in Cincinnati, Ohio, by invoking his campaign slogan, “America First,” Trump tried to settle any doubts about his support for the Armed Forces. He called for a state-of-the-art missile defense, a “total reform” of the Veterans Affairs Department and a policy of “peace through strength.”

“Nobody will be able to compete with us,” Trump said.

His Democratic opponent a day earlier sought to deliver a hawkish message, calling the U.S. an “exceptional nation” and accusing Trump of thinking that approach is "insulting to the rest of the world."

In his address, Trump renewed his call for an end to the “era of nation-building.” But he made clear that this approach does not mean letting down the country’s guard.

“These next four years, I will be uncompromising in the defense of the United States and our friends and our good allies. We are going to end the era of nation-building, and create a new foreign policy – joined by our partners in the Middle East – that is focused on destroying ISIS and radical Islamic terrorism,” he said, to applause from an audience that gave Clinton a respectful, if measured, reception a day earlier.

Trump spoke after a whirlwind day on the campaign trail Wednesday, when he flew down to Mexico City for a surprise meeting with President Enrique Pena Nieto, and then returned to the U.S. to deliver a detailed immigration policy speech in Phoenix. He vowed anew Wednesday night to build a southern border wall and create a deportation force to remove millions of illegal immigrants from the country. He stopped short, though, of calling for all illegal immigrants to be removed, stressing that immigration agents would focus on removing “criminal aliens.”

He reiterated Thursday that, “We are going to defend our border” and called for changing immigration screening procedures.

At the top of the speech, Trump also called for ensuring American values are taught in school.

"We will stop apologizing for America. And we will start celebrating America," he said.

Meanwhile, Vice President Joe Biden hammered Trump during a campaign stop in Ohio with Clinton, casting him as an enemy of the little guy.

“My biggest problem with Donald Trump … is not his cockamamie policies.  It's the way he treats people,” Biden said, noting the Republican nominee made the phrase “you’re fired’ famous.

Clinton running mate Tim Kaine, campaigning in New Hampshire, also said Trump “choked” during his meeting in Mexico by failing to discuss his demands that Mexico pay for a border wall with the country’s president.

Clinton, who has an edge in many state and national polls, has been aggressively courting Republicans and independents who won't vote for Trump but are still discomfited by her campaign.

On Wednesday, she stressed to the American Legion her experience on the Senate Armed Services Committee and as secretary of state and noted her role in advising President Obama on the raid that killed Usama bin Laden, saying she was "deeply honored" to take part.

Offering insight into her foreign policy, Clinton said "we can't cozy up to dictators, we have to stand up to them. We can't contain ISIS, we must defeat them and we will."

Clinton also promised to invest in the military and support veterans, pledging not to privatize the U.S. Department of Veterans Affairs. She said the United States must modernize the military and embrace new tactics, noting that the country should "treat cyberattacks just like any other attacks" and respond through economic, diplomatic and military means.