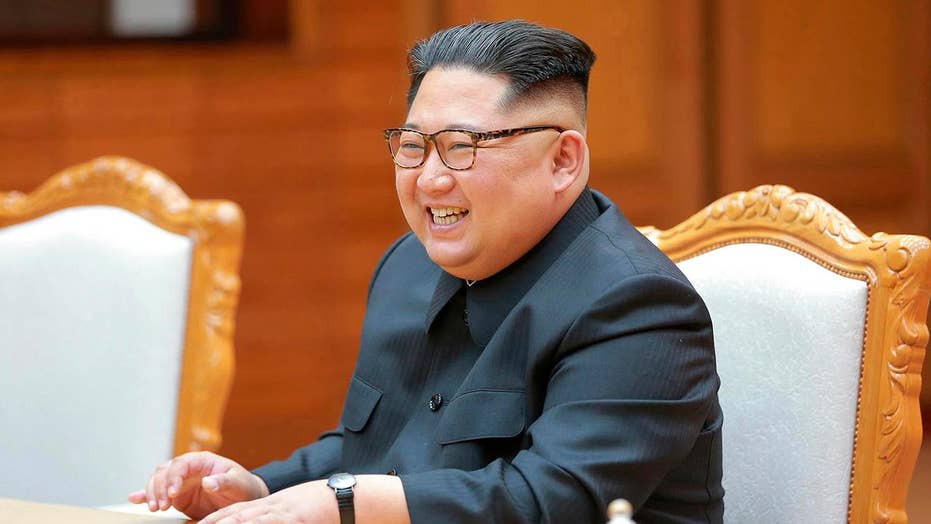 Trump: US team is in North Korea for summit arrangements

President Trump tweets that the United States team has arrived in North Korea to make arrangements for the summit between himself and Kim Jong Un.

President Trump said Sunday that U.S. officials had arrived in North Korea “for the Summit between Kim Jong Un and myself,” in perhaps the strongest indication that the much-anticipated meeting could be back on.

“Our United States team has arrived in North Korea to make arrangements for the Summit between Kim Jong Un and myself. I truly believe North Korea has brilliant potential and will be a great economic and financial Nation one day. Kim Jong Un agrees with me on this. It will happen!” Trump tweeted.

“A U.S. delegation is in ongoing talks with North Korean officials at Panmunjom,” State Department spokeswoman Heather Nauert said in a statement about the meeting, reported first by The Washington Post. “We continue to prepare for a meeting between the President and North Korean leader Kim Jong Un.”

On Sunday morning, Missouri Sen. Roy Blunt, a top Republican on the Senate Foreign Relations Committee, commended Trump for trying to get North Korea to meet and agree to dismantling its nuclear arsenal, but warned all sides must first agree on the terms and warned that tactics last week are “right out of the North Korean playbook.”

“We’re in the three generations of that playbook now,” Blunt told “Fox News Sunday.” ”Act like you want to negotiate and come up with some outlandish view of what that negotiation means.”

He suggested the tactic is an attempt to extract a concession in exchange for a promise that isn’t kept.

Blunt also said all three sides — the U.S., North Korea and South Korea — must first agree on the terms of the summit, including what exactly is the “denuclearization” of North Korea.

And, he lauded Trump, whose presidential campaign he supported, for his efforts toward such an historic summit.

Their quickly arranged meeting, the second in a month, appeared to highlight a sense of urgency on both sides of the world’s most heavily armed border.

Moon, who brokered the summit between Washington and Pyongyang, likely used Saturday’s meeting to confirm Kim’s willingness to enter nuclear negotiations with Trump and clarify what steps Kim has in mind in the process of denuclearization, said Hong Min, a senior analyst at Seoul’s Korea Institute for National Unification.

Trump said Saturday that conversations about a potential summit were “going along very well.”

They were still “looking at June 12 in Singapore, that hasn’t changed,” Trump said at the White House Saturday.

He added that if “it would be a great thing” if they were “successful in the denuclearization of the Korean Peninsula.”

He announced on Thursday that he was withdrawing from the scheduled June summit in Singapore. The cancellation apparently followed Secretary of State Mike Pompeo setting some strict ground-rules ahead for the meeting, which in turn resulted in North Korea vice foreign minister reportedly saying that Pyongyang could make the United States “taste an appalling tragedy” and that a stalemate could lead to a “nuclear-to-nuclear showdown.”

“Based on the tremendous anger and open hostility displayed in your most recent statement, I feel it is inappropriate, at this time, to have this long-planned meeting,” Trump wrote in his letter to Kim. ”Therefore, please let this letter serve to represent that the Singapore summit, for the good of both parties, but to the detriment of the world, will not take place.”

He called the imploded summit a “sad moment in history.”

“You talk about your nuclear capabilities, but ours are so massive and powerful that I pray to God they will never have to be used,” Trump wrote to Kim. “If you change your mind having to do with this most important summit, please do not hesitate to call me or write. The world, and North Korea in particular, has lost a great opportunity for lasting peace and great prosperity and wealth.”

On Friday Trump said that the meeting might be back on.