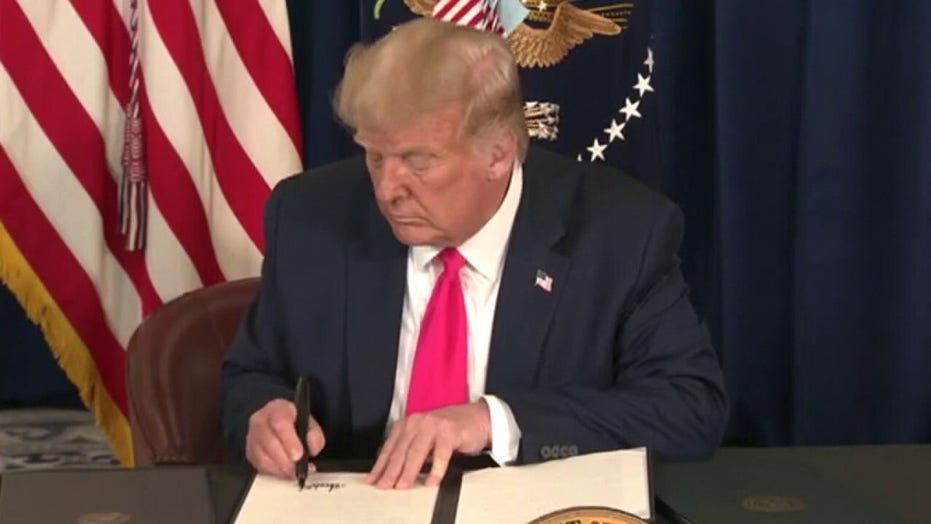 Trump announced a $400-per-week supplemental unemployment payment to out-of-work Americans -- short of the $600 weekly benefit that expired at the end of July. He unveiled an extension of student loan relief and protections from evictions for renters and homeowners.

Trump also issued a payroll tax holiday through the end of the year for Americans earning less than $100,000, while promising more relief if he wins a second term.

The president signed the executive actions from his Trump National Golf Club in Bedminster, N.J., as club members cheered him on. He blamed Democrats for the coronavirus stalemate in Congress and said he'd take matters into his own hands.

"Democrats are obstructing all of it," Trump said. "Therefore, I'm taking executive action ... and we're going to save American jobs and provide relief to the American workers."

For the new $400-per-week benefit, states would be on the hook for funding 25 percent for the millions of jobless Americans, while the federal government would pick up 75 percent of the benefit, Trump said. Asked when the jobless would see the money, Trump said it would be “rapidly distributed.”

The $400 boost is more than what many congressional Republicans wanted. Some opposed any extension of the federal aid, while others backed a boost no greater than $200 per week. Meanwhile, Democrats had been fighting for the full $600-per-week extension, which is on top of state unemployment benefits.

“Today’s meager announcements by the president show President Trump still does not comprehend the seriousness or the urgency of the health and economic crises facing working families," Pelosi and Schumer said in a joint statement Saturday. "We’re disappointed that instead of putting in the work to solve Americans’ problems, the President instead chose to stay on his luxury golf course to announce unworkable, weak and narrow policy announcements to slash the unemployment benefits that millions desperately need and endanger seniors’ Social Security and Medicare."

Trump has long wanted a holiday on payroll taxes, which help fund Social Security and Medicare. But congressional Republicans have not fought for the provision because of how much the suspension on tax collection could drive up an already staggering debt.

"If we get sued, it's [from] somebody that doesn't want people to get money," Trump said. "And that's not going to be a very popular thing."

“Donald Trump is trying to distract from his failure to extend the $600 federal boost for 30 million unemployed workers by issuing illegal executive orders," Wyden said. "This scheme is a classic Donald Trump con: play-acting at leadership while robbing people of the support they desperately need."

"I applaud @realDonaldTrump executive actions to help the American [people]," Grassley, the top Republican on the Senate Finance Committee, tweeted. "Democrats all or nothing strategy jeopardizes the certainty Americans need to pay their bills. [President] Trump puts the American [people] first, compared to nonstop political games by Democrats."

House Democrats already passed their $3 trillion coronavirus relief bill in May. The Senate GOP last month proposed a $1 trillion plan, though didn't bring the measure to a vote as Republicans were divided on whether more aid is even needed.

DESPITE POLLS AND PANDEMIC, TRUMP CAMPAIGN ARGUES CANDIDATE BETTER POSITIONED THAN IN 2016

Pelosi and Schumer have been in talks all week with White House Chief of Staff Mark Meadows and Treasury Secretary Steven Mnuchin, but the two sides couldn't strike a deal.

Democrats blamed the GOP for failing to understand the gravity of the crisis and for trying to "nickel and dime" struggling Americans, while the White House accused Democrats of not being willing to compromise.

Trump blasted the Democrats' $3 trillion HEROES Act as a “radical left policy” that includes bailouts to states, sending stimulus help to undocumented immigrants, and funding for mail-in voting and other election provisions.

“They want to steal the election," Trump said of Democrats.

Trump's orders are narrower in scope than the trillions Congress is mulling for a massive stimulus to the virus-damaged economy.

The president didn't address some of the big issues that congressional proposals sought to tackle, including another round of $1,200 stimulus checks, aid to schools to reopen safely, an infusion of cash to revenue-strapped state and local governments, food assistance, new lawsuit protections for businesses and money for mail-in voting for the 2020 elections.

Because of provisions in the Constitution that grant the legislative branch spending power, the White House can't just pull hundreds of billions out of the ether without Congressional approval.

But the Trump administration believes it has access to $140 billion which it can “reprogram.” That includes $80 billion in untapped money from the big coronavirus bill signed into law in March and roughly $40 billion from the Disaster Relief Fund.

Trump's executive order indicated he would use "up to $44 billion from the DRF" to cover the federal government's 75 percent share of the $400 weekly unemployment aid.

The White House believes it can divert the funding, similar to how Trump in 2019 declared a national emergency at the border with Mexico to shift billions of dollars from the Pentagon budget to help pay for a border wall.

Carl Tobias, a law professor at the University of Richmond School of Law, said Trump may have some legal authority to defer payroll taxes and student loan repayments as well as extending housing assistance. But the $400 unemployment payments are a different story.

“The unemployment benefits are less clear because the Constitution gives Congress authority to spend money,” Tobias told Fox News. “[The president] may try to move around other money appropriated like Trump did with the wall. It is unclear that lawsuits could be resolved in time to stop some of his efforts.”

Democrats want the White House to continue negotiating with Congress on a big package.

“Democrats repeat our call to Republicans to return to the table, meet us halfway and work together to deliver immediate relief to the American people," Schumer and Pelosi said Saturday. "Lives are being lost, and time is of the essence.”

No votes are expected in the House until the week of Sept. 14 unless both parties can reach a deal on a coronavirus stimulus package.

There are about 110 million Americans living in rental households; up to 23 million renters – or 20 percent – are at risk of eviction by Sept. 30, according to an analysis by the COVID-19 Eviction Defense Project.

With the supplemental $600 in unemployment benefits now officially lapsed, about 24 million Americans say they have little to no chance of being able to pay next month's rent, according to a survey by the U.S. Census Bureau.

Rent and mortgage payments are typically the largest monthly expense for Americans: 1 in 4 tenant families pays more than half of its income for rent, a rate that’s even higher in cities like San Francisco and New York, according to Harvard’s Joint Center for Housing Studies.

New jobless figures from the Labor Department, which cover the week ending August 1, show that more than 1.18 million workers sought aid last week, the lowest since March 14.  The latest figures bring the total number of unemployment claims since the shutdown began to more than 55 million.