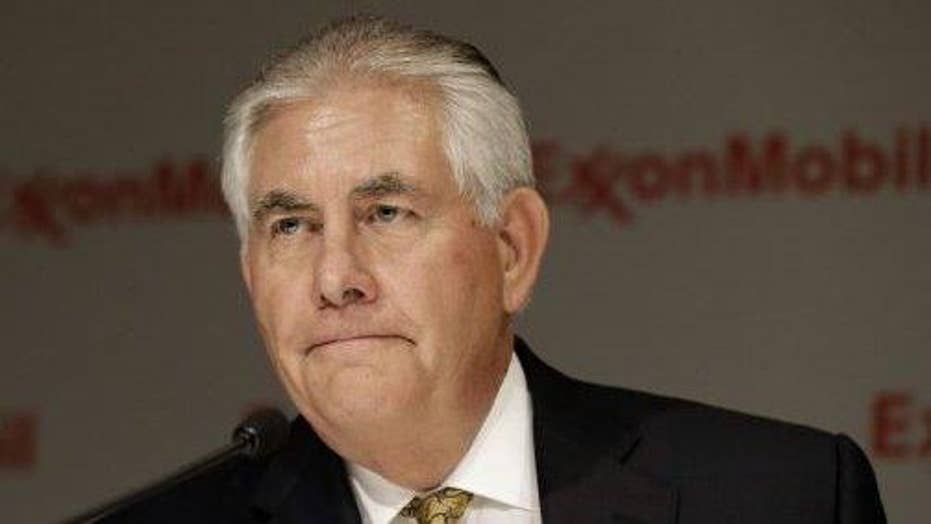 President-elect opens up about his reasoning on 'Fox News Sunday'

President-elect Donald Trump will nominate ExxonMobil CEO Rex Tillerson for secretary of state, according to two sources close to the transition.

The sources warned that nothing is official until the president-elect announces it, which is likely to come over the next few days. Trump told Chris Wallace on “Fox News Sunday” that he was “getting very, very close” to an official announcement.

In another Cabinet development, Trump officially announced Monday morning that he plans to nominate retired Marine Gen. John Kelly for secretary of the Homeland Security Department. Trump had been widely expected to announce the former U.S. Southern Command leader for the post.

Trump met with Tillerson earlier this week, whose company is based in dozens of countries across six continents and has business dealings in Russia, Yemen and other political hot spots. A source close to Trump told Fox News on Friday that the president-elect was impressed with Tillerson.

Trump spoke highly of Tillerson on “Fox News Sunday,” saying that he was “much more than a business executive.”

Rubio posted a thinly veiled warning about Tillerson on Twitter without mentioning him by name.

Sen. John McCain, R-Ariz., chairman of the Armed Services Committee, told Fox News on Saturday that Putin is a “thug” and while he doesn’t know the nature of Tillerson’s relationship with the Russian leader, it’s a matter of concern.

Speaking Sunday with CBS News’ “Face the Nation,” McCain said the Senate would give him a “fair hearing” and noted Tillerson’s ties could be “strictly commercial.”

But he reiterated that “it should be a matter of concern.” He voiced concern that Tillerson’s relationship could “color his approach” toward Putin and the Russian threat.

The 64-year-old Tillerson began his career at Exxon in 1975 as an engineer, rising through the ranks and becoming president and director in 2004 and CEO two years later. He was born in Wichita Falls, Texas, and studied civil engineering at University of Texas.

While noting a “conclusion has not been made,” he stressed that Tillerson is in the business of finding oil around the world, and said “the fact that he actually has a relationship with people like Vladimir Putin and others across the globe is something that [we] shouldn't be ... embarrassed by.”

Asked about tough questions from Republican senators, he said, “We don't have concerns about confirmation.”

Should he become America's top diplomat, he will have a pay cut and complicated financial situation to sort out. Tillerson reportedly makes more than $40 million per year and owns more than $100 million of stock in a company that has holdings and dealings throughout the world.

Fox News was told last week that former U.N. ambassador John Bolton and Rep. Dana Rohrabacher, who were also in the mix for secretary of state, were being considered for deputy secretary.

Fox News’ Serafin Gomez and the Associated Press contributed to this report.