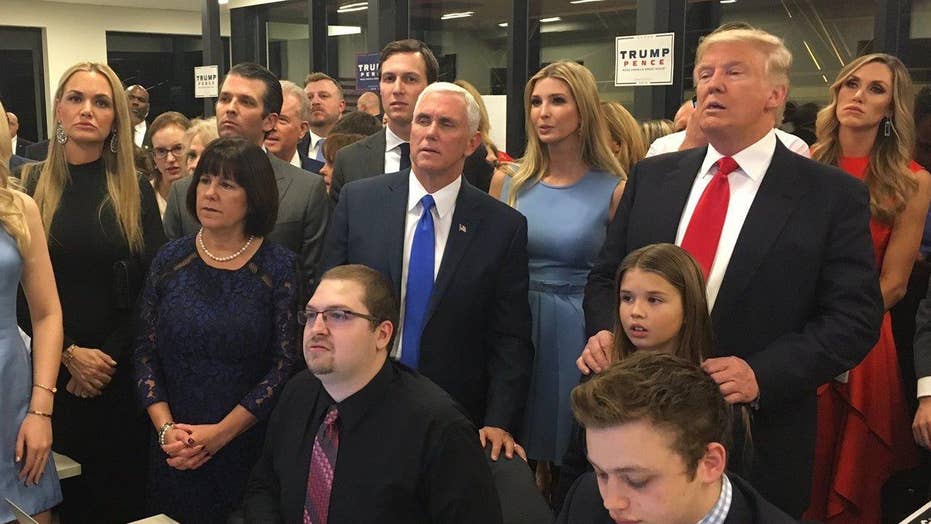 The reported involvement of the two elder Trump sons in a charity fundraiser tied to the inauguration has revived questions about the legal and ethical lines the incoming administration will need to navigate when it comes to Donald Trump’s family members – and what role the president-elect has in mind for them.

Eric and Donald Jr. initially were connected, at least in name, to a nonprofit’s fundraising drive offering presidential access and a possible hunting or fishing trip with the sons in exchange for donations. The Trump transition team swiftly put out a statement Tuesday distancing the soon-to-be first family, saying the details were not “approved or pursued” by the Trumps and making clear Eric and Donald Jr. would not be involved.

It wasn't the first – and surely won't be the last – time that President-elect Trump has to consider the roles relatives play in his inner circle.

While the elder sons may stick with the business side, Trump has openly discussed possible policy roles for daughter Ivanka Trump and her husband Jared Kushner. This, amid speculation that Ivanka may get a White House office and reports that the couple is exploring D.C. real estate.

Further, the Trump team has suggested anti-nepotism laws include flexibility that could allow the presence of relatives in a Trump administration, beyond the traditional first lady's office.

“The anti-nepotism law has an exception if you want to work in the West Wing because the president is able to appoint his own staff,” senior adviser Kellyanne Conway said in a cable interview last week.

At issue is an anti-nepotism measure enacted in 1967 after President John F. Kennedy famously appointed his brother, Robert Kennedy, as U.S. attorney general. The statute states a “public official,” including the president, “may not appoint, employ, promote, advance or advocate for appointment, employment, promotion, or advancement in or to a civilian position in the agency in which he is serving over or which he exercises jurisdiction.”

Members of the Trump transition team are pushing back on claims this would bar the incoming president from appointing family to any post, saying the law is for government “agencies” – not the White House.

Conway, speaking on MSNBC’s “Morning Joe,” said “this came about to stop maybe family members serving on the Cabinet. But the president does have discretion to choose a staff of his liking – and so if that is true, and that legal advice holds, that will open up a realm of responsibilities.”

Trump is not the first to contend with anti-nepotism laws – President Jimmy Carter reportedly was limited by the statute when he was prevented from hiring his son as a White House intern. A more recent example – and one that could help the Trump team’s case – was in 1993, when President Bill Clinton appointed then-first lady Hillary Clinton as chairwoman of the president’s Task Force on National Health Care Reform. A court doubted that Congress intended to include the White House and the Executive Office of the President as agencies under federal anti-nepotism law, and upheld Mrs. Clinton’s appointment to the unpaid position.

“Hillary Clinton was already the first lady during her appointment,” Painter told Fox News. “She already had an office in the White House.”

Painter suggested the Trump team pursue a possible amendment to the law if they want to officially put family members on staff.

“It applies to the entire government,” Painter told Fox News. “President-Elect Trump should try to negotiate with Congress a change to the statute, because here is the problem: if these family members are, de facto, serving as senior advisers, it would be better to just allow it formally, as to avoid any conflict of interest statutes.”

Trump could seek to get around legal complications by considering family members whose counsel he values as informal, unpaid advisers. However, Painter noted that having them even as unofficial advisers could pose an issue due to their investments.

“Kushner and the children would have to sell off their interest in any enterprises that would interact with the legislation they are advising on,” Painter told Fox News.

The Trump children were a crucial part of the campaign team – crisscrossing the country for their father in their roles as surrogates and advisers. Which is why Democratic strategist Joe Trippi said it would be easy for the public to turn a “blind eye.”

But he too raised concerns about their role in Trump’s business empire, amid apparent plans to transfer management of The Trump Organization to the Trump children, and said the team needs to define a “bright line” between the business and the presidency.

“The kids are in meetings with government officials, and then they’re doing their business deals two hours later … even the semblance of doing both is a huge problem,” said Trippi, a Fox News contributor and former Howard Dean campaign manager.

Former Democratic Ohio Rep. Dennis Kucinich said the discussions raise more concerns about potential conflicts of interest than about nepotism. “If they want to work for the United States of America, they need to be ready to cut ties with corporate interests, and if they can do that, I think they’ll be able to work this out,” said Kucinich, a Fox News contributor.

President-elect Trump has indicated some role for Ivanka and Jared, without offering specifics. Asked by Chris Wallace on “Fox News Sunday” whether Ivanka and her husband would move to Washington, the president-elect said they were “working that out.”

“If you look at Ivanka, you take a look, she’s so strong, as you know, to the women’s issue and childcare and so many things – she’d be so good,” Trump told Fox News. “I’d love to have Jared helping us on deals with other nations and see if we can do peace in the Middle East and other things.”

The president-elect said his team was looking at their involvement from a “legal standpoint right now,” though the transition team has called rumors of Ivanka taking East Wing office space normally used by the first lady “false.”

“No decisions regarding Ivanka’s involvement have been made,” Trump spokeswoman Hope Hicks said last week.

“His family members have a lot more of an informed understanding of policy than some of the people being hired as advisers,” Painter told Fox News. “I think his family members are pragmatists and he could very well benefit from their input and advice.”