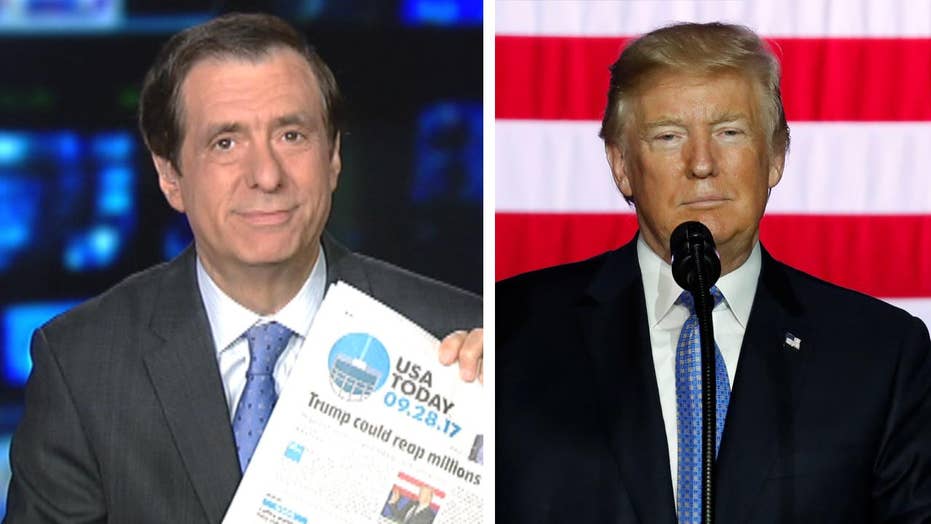 Kurtz: Does anyone care about busting the budget?

'MediaBuzz' host Howard Kurtz reacts to critics who slam President Trump for being able to 'reap millions' from his GOP tax refrom plan.

President Trump has served up a tax plan with plenty of dessert but no vegetables.

And covering how this goes through the congressional meat grinder is a major challenge for the press.

On paper, it sounds like cutting taxes should be the easiest thing that Congress does. Politicians like giving out goodies, and Americans deserve to be able to keep more of their own money.

But the Trump plan will cost an estimated $2.2 billion over a decade, and some folks will be stuck with part of the bill.

Yet while the Republicans have spelled out the lowering of tax rates for businesses and individuals, they have not said which tax deductions they will ax to pay for this. They do seem to have taken the hugely popular home mortgage and charitable deductions off the table (but not the break on state and local taxes).

One media theme emerging yesterday is that this may be a windfall for POTUS. USA Today’s banner headline is “Trump Could Reap Millions in Tax Plan,” although the president has said “it’s not good for me.” But what if it is? Haven’t previous presidents benefited from tax cuts? It’s a fact of life that Donald Trump is a rich businessman.

Some news organizations are laser focused on how the Trump plan will blow up the deficit, but paid little attention to the deficit exploding during the Obama years.

On this score, though, there is plenty of hypocrisy.

Republicans have complained about the out-of-control deficit for years, but have largely been quiet about the impact of their party’s plan. Democrats do the same thing when they’re in charge, except they usually bust the budget with spending hikes rather than tax cuts.

The deficit hasn’t really been a voting issue since 1992, when Ross Perot pushed it to the forefront. Now it’s more of an opposition-party weapon, unleashed only when your side doesn’t control the White House.

For the GOP, the New York Times says, "the deficit hawks have hardly peeped…

"For years, Republican lawmakers lamented the soaring national debt, pressing for spending cuts and clinging to the mantle of fiscal responsibility. But last week, Senate Republicans hammered out a deal to allow for as much as $1.5 trillion in tax cuts, betting that supercharged growth will make up for lost revenue, a potentially dubious prospect. The tax plan outlined Wednesday by the White House and Republican leaders in the House and Senate could cost more than $2 trillion over the next decade."

The Washington Post says the administration’s nine-page outline "left many key questions unanswered, including how they plan to avoid adding trillions of dollars to the government’s debt...

"The White House and GOP leaders negotiated for months and agreed in large part only on the taxes they want to cut. They now face the more arduous task of agreeing on which tax deductions to take away."

There are two other parts of the debate that Rs and Ds have been fighting about forever. One is whether the GOP is cutting taxes for the wealthy (the president insists they won’t get a net benefit, but the details are fuzzy, as is the definition of who’s rich). The other is whether to use “dynamic scoring”—this goes back to the Reagan administration’s rosy scenario—on the theory that tax cuts will unleash economic growth that limits the impact on the deficit.

Chief economic adviser Gary Cohn went there yesterday, saying: "We think we can pay for the entire tax cut through growth over the cycle."

Politically, the situation is clear: the Republicans, having bungled health care, need a win by year’s end, and tax cuts are their best bet. But how that plays out, and who wins and loses, is going to be a complex and highly charged battle.