The presidential limo of President Donald Trump is parked on a hill in front of a private residence in Beverly Hills, Calif., as he meets with supporters during a fundraiser, Friday April 5, 2019. (Associated Press)

President Trump flew to Las Vegas on Friday night, with plans to address the national leadership of the Republican Jewish Coalition on Saturday. Vice President Mike Pence is scheduled to speak at the same gathering, according to reports.

The president had left Washington earlier Friday, arriving in Los Angeles in the afternoon to attend a re-election fundraiser after meeting with officials earlier in the day at the Calexico-Mexicali border where he toured a two-mile stretch of newly built fencing.

Upon landing at Los Angeles International Airport, Trump boarded a helicopter to take him to Beverly Hills. The event was held at the home of health care executive Lee Samson and was expected to raise $5 million for the Republican Party, the Los Angeles Times reported.

Tickets ranged from $15,000 to $150,000, according to City News Service. It was not immediately clear how many people attended or how much money was raised.

“It was a big turnout. It was wonderful,” Rabbi Marvin Hier, the dean and founder of the Simon Wiesenthal Center who gave the prayer at Trump’s inauguration, told the Daily Beast. “We couldn’t say because of the Sabbath. But the president shook hands with us. It was very nice. ... We couldn’t see the speech.” 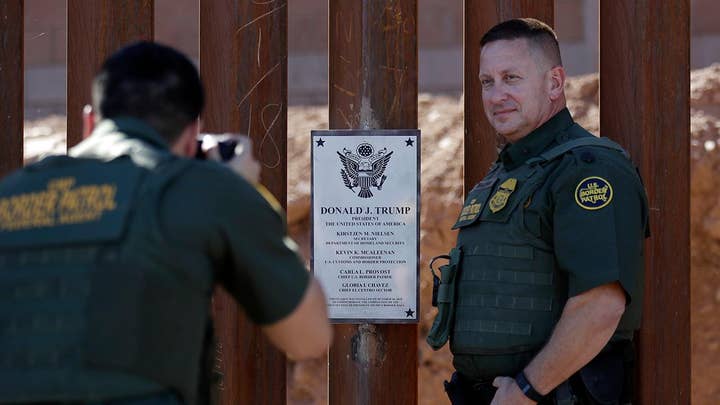 Proceeds from the event will go toward Trump's re-election campaign and various RNC accounts, according to the Times.

Republican National Committeeman Shawn Steel told the Washington Post that Trump spoke about winning California in 2020 and got a round of applause when he mentioned his administration’s decision to recognize Israel’s sovereignty over the Israeli-occupied Golan Heights.

The location of the event was initially kept secret. It drew around 10 protesters outside and a handful of Trump supporters, according to the Daily Beast.

After the fundraiser, Trump had dinner with his son Eric and local officials at his Palos Verdes golf club, the Washington Post reported. The trip marks Trump’s third visit to California as president.

Around 10:10 p.m., Trump left for Las Vegas aboard Air Force One, embarking on his fifth visit to Nevada since his election victory in 2016, according to the Las Vegas Review-Journal.