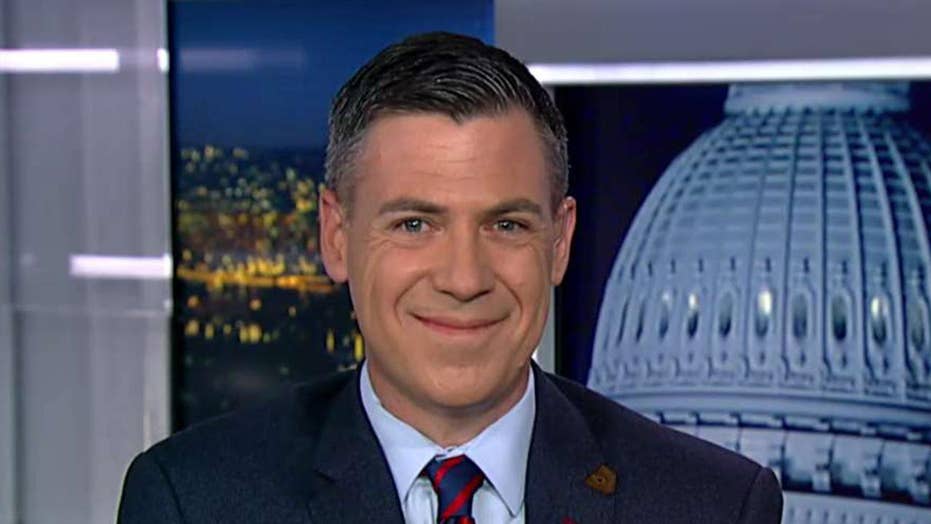 President Trump should tell House Speaker Nancy Pelosi he’ll refuse to give his State of the Union address until after the cloud of impeachment is lifted, one GOP representative urged Tuesday.

“President Trump should tell her ‘no games’ and tell her he'll deliver the State of the Union only after our country clears the divisive impeachment hurdle,’’ Rep. Jim Banks, R-Ind., wrote Tuesday on Facebook.

“It’s not just America watching the State of the Union each year. Tehran is watching. Hong Kong is watching. Taipei is watching,” Banks said in arguing that Trump should have a chance for a more unifying address.

Trump is slated to give the State of the Union speech on Feb. 4 -- just two weeks after his impeachment trial in the Senate is expected to commence.

"Well, it's going to become awkward, isn't it? To be the president giving the State of the Union in a chamber where he's just been charged with high crimes and misdemeanors? It's not my decision to make, but I can see why that might be a consideration," Cornyn told The Washington Examiner.

Two days after the House impeached him, Pelosi sent the invite to Trump to give the State of the Union, citing her constitutional obligation.

Trump immediately accepted the invite for the Feb. 4 address – not knowing Pelosi would sit on the articles for nearly four weeks.

Banks argued that Pelosi, with her delay, "is hoping [the] ongoing Senate trial and impeachment cloud hangs over the president" while he speaks.

Impeachment is moving forward with a House vote on Wednesday to send the articles to the Senate.

Senate Majority Leader Mitch McConnell predicted an impeachment trial could start in earnest next Tuesday. That means the Feb. 4 speech could occur during the trial.

A trial would be prolonged if the Senate allows for new testimony from potential witnesses, such as former National Security Adviser John Bolton and Hunter Biden, the former vice president's son whose business dealings in Ukraine sparked Trump's request for a foreign investigation, thus spurring impeachment proceedings.

The White House did not immediately respond to a request for comment about delaying the speech.

Former President Bill Clinton delivered a State of the Union address in the midst of his five-week Senate impeachment trial.

Clinton didn’t mention impeachment at all during his more than 78-minute speech on Jan. 19, 1999.  Clinton was acquitted on both articles of impeachment a month later.