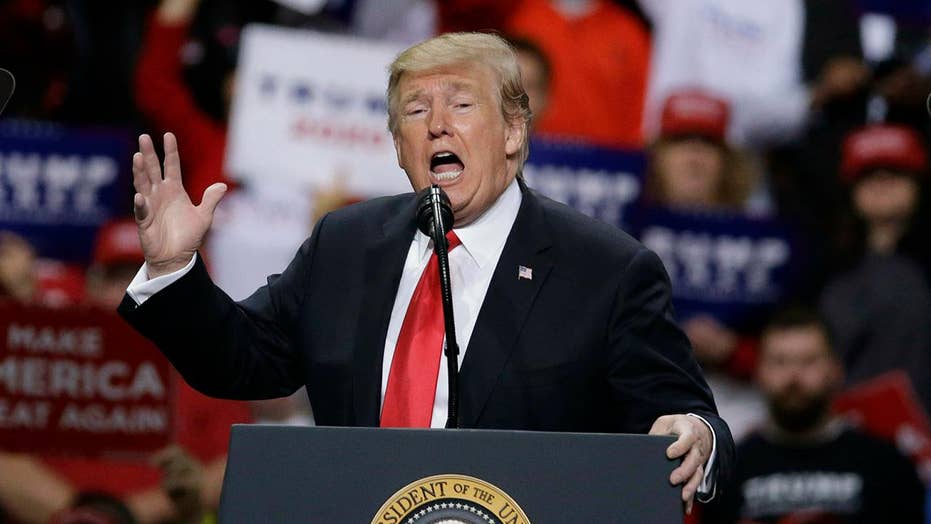 The president spoke on a range of topics at his 'Make America Great Again' rally.

President Donald Trump derided actor Jussie Smollett as "third rate" during a Wisconsin rally on Saturday and called his legal trouble — in which he allegedly lied about Trump supporters attacking him in a hate crime — a "disgrace to our nation."

"That case in Chicago is a disgrace to our nation," he said, after defending his supporters. "He said 'I was beaten up by MAGA country.' Can you believe it?" Trump said, referring to Smollett during a rally in Green Bay.

"Turned out to be a total lie," he added.

Smollett's case ignited a media firestorm after the “Empire” actor, who is gay and black, said his alleged attackers yelled, "This is MAGA country."

A grand jury indicted him on 16 charges for allegedly lying about the attack but State's Attorney Kim Foxx controversially dropped the charges. Foxx's decision provoked widespread criticism and appeared to prompt some of her staff to resign. 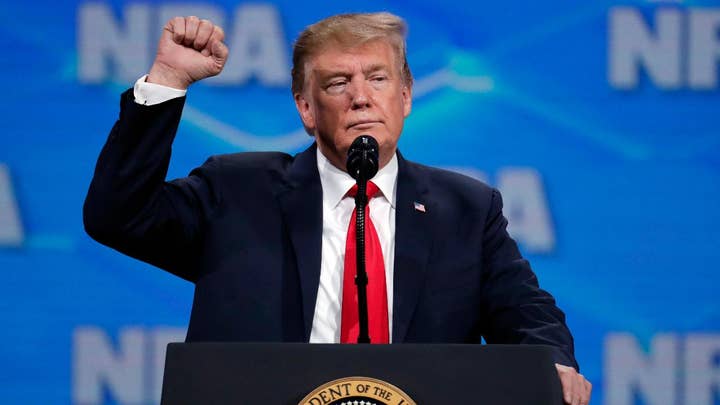 Smollett became the target of a civil lawsuit in April as the city's law enforcement demanded payment, potentially above $130,000, to cover the costs of their investigation into his alleged attack.

His alleged assailants, brothers Abel and Ola Osundairo, also filed a defamation suit against Smollett's attorneys for continuing to accuse them of perpetrating a homophobic and racist attack.

On Saturday, thousands, including some who stayed the night and waited in the cold just to be first in the door, attended the “Make America Great Again” rally.

"There's no place I'd rather be than right here in America's heartland," Trump told the audience Saturday. "Is there any place that's more fun than a Trump rally?"

"There's no place I'd rather be than right here in America's heartland. Is there any place that's more fun than a Trump rally?"

The event occurred on the same night as the White House Correspondents' Association dinner, which Trump skipped for the third year in a row.

His speech came just hours after a tragic shooting that left one dead and several others injured at a synagogue in California.

"Our entire nation mourns the loss of life," Trump said, before noting that his administration "forcefully" condemned anti-Semitism.

In 2016, Trump won Wisconsin -- often considered a swing state with strong labor interests -- with just a slim 1 percent margin over former Democratic presidential nominee Hillary Clinton. According to a statewide survey released in April, Trump has maintained nearly 50 percent of the state's support during his third year in office.

Trump's rally came just after he saw a 3.2 percent GDP report and Special Counsel Robert Mueller's report that expressed concerns about obstruction of justice but made no formal accusations of that or "collusion" with Russia.

POLITICIANS REACT TO CALIFORNIA SYNAGOGUE SHOOTING: ‘NO ONE SHOULD EVER FEAR GOING TO THEIR PLACE OF WORSHIP’

But as the 2020 election cycle ramped up, Trump seemed to face heightened criticism from Democratic presidential candidates and politicians who continued pressing his administration on the issue – and, in some cases, calling for impeachment proceedings.

During his speech, Trump took aim at his 2020 rivals Sen. Bernie Sanders, I-Vt., former Vice President Joe Biden, Sen. Elizabeth Warren, D-Mass. - whom he referred to as "Crazy Bernie," "Sleepy Joe," and "Pocahontas." He also derided Democrats, whom he said had never been angrier, for putting all their hopes in what he called the "collusion delusion," a reference to speculation surrounding the Mueller investigation.

Some in the Democratic field have also attacked Trump's policies and, as Biden did, the president's character. Before the rally, Sanders ran an ad in the Green Bay Press-Gazette, accusing the president of lying to Wisconsin workers. Sanders, in the front page ad, portrayed himself as someone who would end "corporate greed" in the state.

Trump also defended his economic record and touted efforts on trade, promising that factories would return to the country and indicating that he wouldn't settle for an unfair deal with China. America, Trump said, was the "piggybank" that people kept taking advantage of on trade.

He also blasted Democrats as extreme, pointing out their positions on late-term abortion, the "Green New Deal" and other economic policies, and immigration. Democrats, Trump argued, would bring the country economic and financial "ruin."

The Republican Party, Trump said, was the party of all Americans while Democrats were the party of hoaxes and late-term abortion, among other things.

The president also spoke on the migration crisis in which thousands flooded the U.S.-Mexico border and created a thorny situation in which the administration could no longer hold some detainees. After vowing to build the southern border wall, he accused Democrats of preferring "open borders" which, he said, would bring "tremendous crime" and inflame the drug crisis.