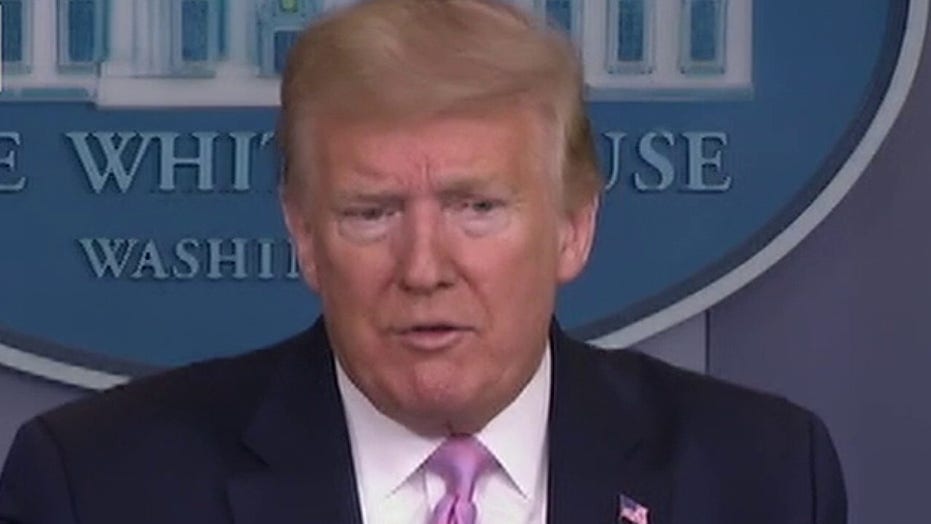 President Trump, with the support of Congress, is poised to preside over an unprecedented explosion of government spending that already is set to shatter deficit records and could grow further if plans for more coronavirus relief bills -- nearing a potential total price tag of $5 trillion -- become reality.

Even accounting for inflation, no modern administration has seen such levels of spending, covering everything from FDR's New Deal to recession-era rescues in the early part of the Obama administration.

The national debt itself already tops $24 trillion. As it stands, the 2020 deficit (the annual budget shortfall) is poised to break the record for a single-year deficit previously set under former President Obama as the U.S. government deals with the fallout from the coronavirus pandemic, passing historically expensive economic stimulus bills in an effort to soften the blow of mandatory shutdowns for businesses and public life in general.

Following the passage of the $2.2 trillion CARES Act late last month, Goldman Sachs has forecast that the federal deficit will reach $3.6 trillion for 2020, according to The Wall Street Journal. This is more than double the $1.4 trillion budget deficit the U.S. racked up in 2009, the highest one-year federal deficit in terms of gross dollars in U.S. history.

Part of this was unavoidable for the president. Revenues will decline as the economy has tanked, and the $2.4 trillion worth of total coronavirus relief spending Trump has signed into law -- across three separate bills -- was widely seen as a necessary part of the federal government's response to a historic health and economic crisis. That spending may increase further as lawmakers and Trump appear to be seeking much more -- the president wants another $2 trillion package focused largely on infrastructure, and Democrats are seeking a separate $500 billion measure for small business, hospital and local government relief before that.

All told, the total price tag could near $5 trillion if such measures are approved.

SEN. CHUCK GRASSLEY: PELOSI, SCHUMER 'DON'T HAVE A LEG TO STAND ON' IN 'PHASE 4' FUNDING TALKS

Yet Trump, overseeing a humming economy for the first three years of his presidency, didn't use that time to reduce the federal deficit, but instead increased the pace of federal deficit spending. In the final two years of the Obama administration -- 2015 and 2016 -- the combined federal deficit was just under $1.03 trillion. The federal deficit was projected to be nearly $1.02 trillion in 2020 alone, according to the Congressional Budget Office, before the coronavirus upended previous projections.

"When one thinks about deficits and their role in the economy ... fiscally responsible policies are bringing your deficit down during good times so that you have the fiscal space to borrow when there are emergencies like we have now," Maya MacGuineas, the president of the Committee for a Responsible Federal Budget, a fiscal watchdog group, told Fox News. "What we've seen in the Trump administration has been a strong economy paired with very large deficit spending."

She continued: "So over the past years, we've had huge unpaid-for tax cuts and spending increases, and what this meant was we went into this emergency situation with our debt relative to the economy twice as high as it was when we went into the recession of 2008, for instance."

Because changes like inflation, fluctuations in the economy and population growth make it difficult to compare government spending, debt and deficits over periods of time, the health of a government's debt or deficit is typically calculated as a share of the gross domestic product (GDP) -- a measure of an economy's size and therefore ability to pay off the debt it incurs.

The federal deficit as a share of GDP in 2020 is likely to be the highest it has been since World War II, with a $3.6 trillion deficit making up approximately 15 percent of U.S. GDP.

The federal deficit was almost 27 percent of GDP in 1943, or more than $50 billion, as the U.S. was in the middle of World War II under former President Franklin Delano Roosevelt, according to the St. Louis Federal Reserve. Deficits swelled to 9.7 percent of GDP in 2009 as the Obama administration worked to dig the U.S. out of the Great Recession. The highest peak in the intervening time period was when the deficit reached 5.7 percent of GDP in 1983 as the Reagan administration cut taxes and ramped up military spending in an effort to defeat the Soviet Union.

Deficits under Lyndon B. Johnson, whose "Great Society" programs included Medicare and Medicaid, never breached 3 percent of GDP, largely because the spending did not result from a crisis situation like World War II or the Great Recession, and the high costs of those programs were spread over many years.

To MacGuineas' point, the current national debt -- more than $24 trillion -- is more than 100 percent of the GDP.

"This time we went into the downturn, deficits were already a trillion dollars, and again, it was the biggest deficit we've ever seen during a period of economic growth, so these are record-setting numbers in terms of how irresponsible we were before this crisis," MacGuineas said, noting that her post-coronavirus projections for the 2020 deficit put it closer to $3 trillion versus Goldman Sach's $3.6 trillion projection -- a number that would still shatter previous records.

"It means that structurally, the deficits will not return to manageable levels even when we're through this crisis, and it's going to make any recovery plan much more difficult because we're already borrowing so much, we don't know how much space there is to borrow more," she continued. "It's left us incredibly vulnerable, and this is just kind of why you fix your roof when the sun is shining, because you don't want to be in such a dangerous and fiscally unmoored position as we are when this crisis is hitting us."

The Trump administration, in its first three years, ramped up military spending and cut taxes, two priorities for the president that worked in conjunction to increase the deficit even as it made cuts elsewhere in the budget. The attitude toward the deficit under his administration is out of character for a Republican president, especially after Republicans of the early 2010s raised hell over increases in government spending during the Obama administration.

FILE- In this Dec. 19, 2018, file photo House Speaker Paul Ryan of Wis., gives a farewell speech in the Great Hall of the Library of Congress in Washington. (AP Photo/Carolyn Kaster, File)

REPORTER'S NOTEBOOK: HOW CONGRESS MAY PROCEED IN THE 'AFTER CORONAVIRUS' ERA

That image of the party culminated in 2017 when former Rep. Paul Ryan, R-Wis., who throughout his political career was known as a deficit hawk, became House speaker. Ryan served alongside President Trump, however, who had little interest in cutting entitlements, which are the chief drivers of federal spending. He accepted that reality when he retired from Congress in 2018.

"I acknowledge plainly that my ambitions for entitlement reform have outpaced the political reality and I consider this our greatest unfinished business," Ryan said in his farewell speech. "Ultimately, solving this problem will require a greater degree of political will than exists today. I regret that."

The increased deficits under Trump also conflict with comments then-candidate Trump made in 2016 in an interview with the Washington Post's Bob Woodward.

"I think I could to it fairly quickly," Trump said in response to a question from Woodward on paying off what was then a $19 trillion national debt.

When Woodward asked Trump how long that would take, Trump responded, "Well, I would say over a period of eight years," before explaining that he believed renegotiated trade deals could help eliminate the national debt.

The Trump White House did not respond to a request for comment for this report. But Treasury Secretary Steven Mnuchin said on March 17, as Congress was working on its economic stimulus legislation that turned into the $2.2 trillion CARES Act, that the pandemic necessitated deficit spending in the near-term.

"Congress right now should be concerned about the American workers and small business, you know, interest rates are incredibly low, so there's very little cost of borrowing this money," he said. "And as I've said -- in different times, we'll fix the deficit. ... This is the time, though, hardworking Americans are impacted by government decisions. That's when the government has to step up to put money into the economy."

Romina Boccia, the president of the conservative Heritage Foundation's Grover M. Harmann Center for the Federal Budget, has warned that rapid-fire spending as the government works to dig out of the economic hole caused by the coronavirus could lead to even more consequences for the United States.

"There's the real risk, of course, that we might be teeing up a public debt crisis on the other end of this," Boccia said, which could lead to increased taxes, difficulties providing public services, inflation and economic stagnation.

Of course, the economic pain the government is trying to alleviate is real -- with more than 16 million people filing for unemployment in recent weeks, a jarring figure. Lawmakers and the president are trying to not only cushion the blow from the shutdowns but prevent a broader economic collapse. Some of the appropriated money -- that going toward loans -- could also be paid back.

Boccia has urged that lawmakers more specifically target relief programs to businesses and individuals that have actually lost money because of coronavirus-related shutdowns and rewrite the expansion of unemployment benefits that some lawmakers have decried because it could make it more lucrative for some workers to leave their current jobs than remain employed.

All of this comes as lawmakers wrangle over potential further measures to combat the economic effects of the coronavirus. Republicans are asking for about $250 billion to immediately refresh the highly popular Paycheck Protection Program (PPP) which gives loans to small businesses. Meanwhile, Democrats are pushing for approximately $500 billion to address the PPP, as well as other priorities.

This is before Congress returns to Washington, D.C., in the coming weeks, when lawmakers have indicated they could potentially pass yet another coronavirus-related bill. Trump has said that he would like approximately $2 trillion in infrastructure spending in the bill while House Speaker Nancy Pelosi, D-Calif., has said she wants at least $1 trillion in spending in what could be the fifth piece of legislation to combat the coronavirus.

"One of the things that I think really is a bit of a warning sign is that this isn't about topline numbers," MacGuineas said of the chatter on additional legislation. "This isn't picking a number, especially one with a trillion at the end of it, out of the sky. It's instead really studying the dynamics in the economy, where things are proving to be resilient and where things are pockets of real weakness and building up from there how much we should be spending to stabilize the economy."

She continued: "I would argue there probably will be need for further measures and they will probably be quite large, but just tossing around one trillion and two trillion cavalierly without building it off specific needs that one sees worries me about the political process putting together a package like this... Just because it's the time for deficit spending, which it is, it's not the time for careless, poorly targeted or cavalier deficit spending."