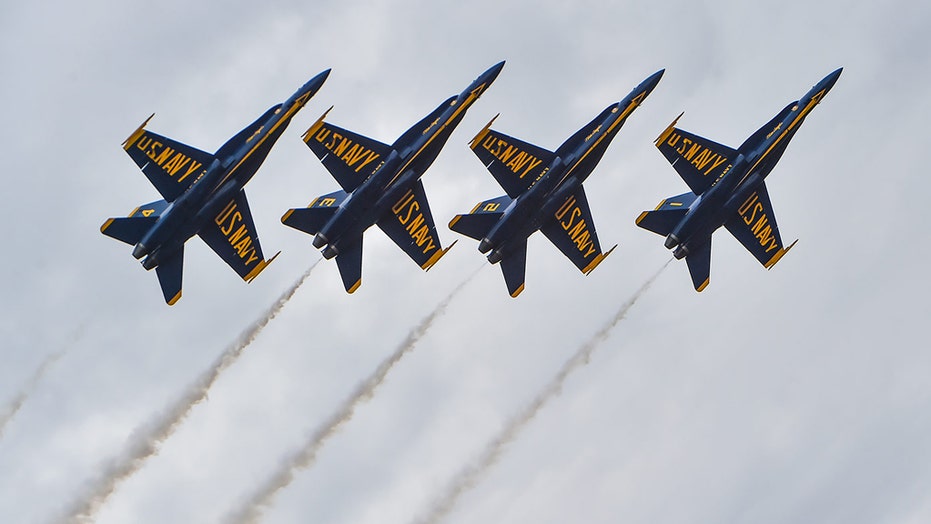 In the coronavirus task force briefing Wednesday, President Trump said that the U.S. Navy's Blue Angels and the Air Force's Thunderbirds would be doing flyovers of major American cities in honor of "American medical workers" — and that on July Fourth he would bring back the Independence Day celebration held last year on the National Mall.

"I'm excited to announce that in the coming weeks, the Air Force Thunderbirds – are incredible – and the Navy Blue Angels, equally incredible, will be performing air shows over America's major cities," Trump said. "What we're doing is we're paying tribute to our front line health care workers confronting COVID. And it's really a signal to all Americans to remain vigilant during the outbreak. This is a tribute to them, to our warriors. Because they are equal warriors to those incredible pilots and all of the fighters that we have for the more traditional fights that we win and we win."

Trump did not say which cities the Thunderbirds and Blue Angels, the U.S. military's two top flight demonstration teams dedicated to showcasing America's air prowess, would be visiting. He mentioned that they could fly over "some of the cities that aren't major cities" as well.

The Air Force's Thunderbirds have already gotten a head start on Trump's plan. Rather than just conducting their traditional flyover of the Air Force Academy's graduation over the weekend, they went on an extended flyover of major cities and medical facilities in Colorado.

"We salute Colorado's healthcare workers and first responders who are at the forefront of our nation's fight against COVID-19. They are an inspiration for the entire country during these challenging times and it was an honor to fly for them yesterday," the Thunderbirds' official Twitter account said.

KDVR FOX 31 published a map of the Thunderbirds' flight path from the weekend, which started in the Fort Collins area before going south over Boulder and covering much of the Denver metro area -- including Lakewood and Aurora. They then proceeded south along I-25 to Colorado Springs, the location of the Air Force Academy's graduation, then down past Pueblo.

"The Thunderbirds and the Blue Angels crews ... wanted to show support to the American medical workers who just like military members in a time of war are fiercely running forward," Trump said. "... I want to see those shows. I've seen it many times and I can't get enough."

The Navy's Blue Angels (pictured) and the Air Force's Thunderbirds are known for their close-flying, high-speed aerial acrobatics. (US Navy)

"They're going to be doing a lot of work, a lot of very dangerous flying. It's dangerous," Trump said, admiring the precision flying and acrobatics for which the Thunderbirds and Blue Angels are known. "You know the odds when you start going at massive speeds and you're 18 inches away from each other, that's dangerous work."

Trump also said Wednesday that he planned to bring back the controversial July 4 celebration that he held on the National Mall last year.

"And on July 4th, we'll be doing what we had at the mall, as you know, we're going to be doing it," Trump said. "Last year was a tremendous success. And I would imagine we'll do it — hopefully I can use the term 'forever.' It was a great success, as you remember."

Critics derided last year's event on the Mall as a partisan ploy designed to use the military to score political points. But a large crowd turned out in the rain, lining the Reflecting Pool on both sides, and Trump considered the event to be a hit.