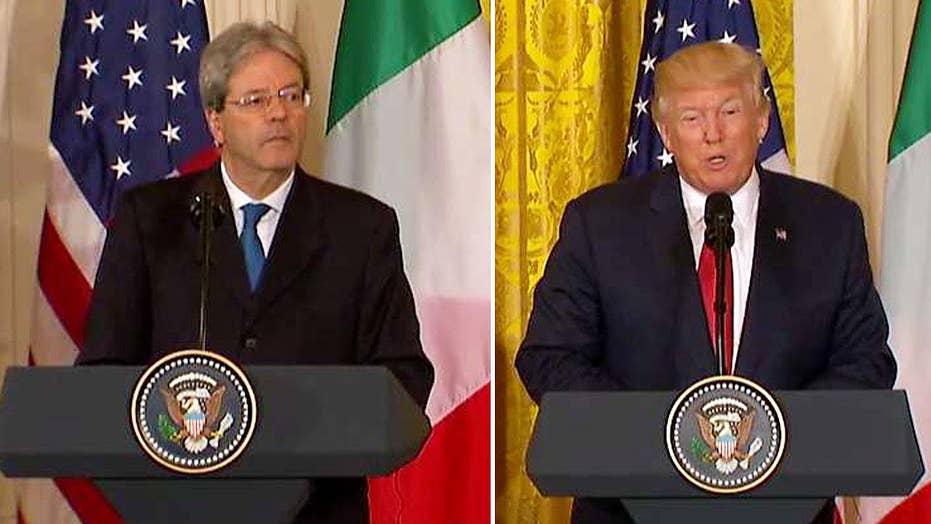 Trump: Italy is a key partner in fight against terrorism

President Trump’s joint press conference with Italian Prime Minister Paolo Gentiloni Thursday included an awkward moment when Trump said there was no role for the U.S. in Libya – moments after Gentiloni outlined what that role would be, and called it “critical.”

Both leaders were asked by an Italian reporter about what the U.S. role should be in Libya. Libya has been plagued by intermittent civil war and instability since the fall of dictator Muammar Qaddafi in 2011. A fragile U.N.-backed government is currently holding on to power in Tripoli, but faces a number of threats including an ISIS presence in the country.

Gentiloni noted past U.S. missions to help drive ISIS from Sirte last year, and said that “now the commitment must be political” in broadening the basis of consensus for the unity government recognized by the international community to include countries like Egypt and Tunisia.

“A divided country and in conflict would make stability worse, the United States’ role in this is very critical,” he said.

But no sooner had Gentiloni answered, Trump immediately responded: “I do not see a role in Libya.”

“I think the U.S. right now has enough role, we are in a role everywhere so I do not see that,” he said as Gentiloni stared ahead.

Trump said that he does however, see a role in fighting ISIS, something in which he said the U.S. is being “very effective.”

“We are effectively ridding the world of ISIS,” Trump said. “I see that as a primary role and that’s what we’re going to do whether it’s in Iraq or Libya or anywhere else, and that role will come to an end at a certain point and we will go back home and rebuild our country which is what I want to do.”

.@POTUS: "I do not see a role in Libya. I think the United States has right now enough roles... I do see a role in getting rid of ISIS." pic.twitter.com/5hWEOP4hCM

During last year’s presidential campaign, Trump promised to scale back America’s commitments abroad in order to be able to focus on domestic policy. But he appeared to move away from that outlook when earlier this month he approved the bombing of an airfield in Syria in response to a chemical attack by Syrian President Bashar al-Assad against rebels in northern Syria.