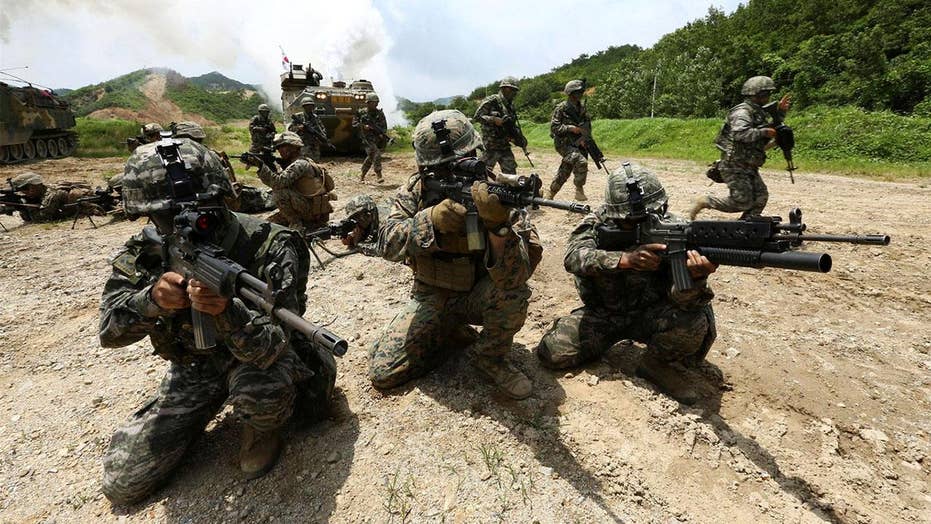 US has no plans to suspend more South Korea military drills

President Trump on Wednesday tweeted that there was “no reason” for joint military exercises between the U.S. and South Korea, dubbing them costly while describing his relationship with North Korean dictator Kim Jong Un as “very good” and “warm.”

However, he signaled that he could restart them if he wanted to, promising that they would “be far bigger than ever before.”

The president tweeted a White House statement, in which he said he believed the rogue regime was experiencing “tremendous pressure from China” amid “trade disputes” with the U.S. Simultaneously, North Korea was acquiring “considerable aid” from China, which “is not helpful,” Trump continued.

“Nonetheless, the President believes that his relationship with Kim Jong Un is a very good and warm one, and there is no reason at this time to be spending large amounts of money on joint U.S.-South Korea war games,” Trump tweeted. “Besides, the President can instantly start the joint exercises again with South Korea, and Japan, if he so chooses. If he does, they will be far bigger than ever before.”

The statement went on to insist that any issues between the U.S. and China would be taken care of by Trump and Chinese President Xi Jinping, who have a “very strong” relationship.

Earlier Wednesday, Defense Secretary Jim Mattis issued a statement that three military exercises were suspended “in order to provide space for our diplomats to negotiate the verifiable, irreversible and complete denuclearization of the Korean peninsula.”

"Our military posture has not changed since the conclusion of the Singapore summit and no decisions have been made about suspending any future exercises," he continued, adding that the alliance between the U.S. and South Korea was "ironclad."

Following his June meeting with Kim Trump promised to end the war games with South Korea.

“I have asked Secretary of State Mike Pompeo not to go to North Korea, at this time, because I feel we are not making sufficient progress with respect to the denuclearization of the Korean Peninsula,” Trump tweeted. “Additionally, because of our much stronger trading stance with China, I do not believe they are helping with the process of denuclearization as they once were (despite the UN Sanctions which are in place).”