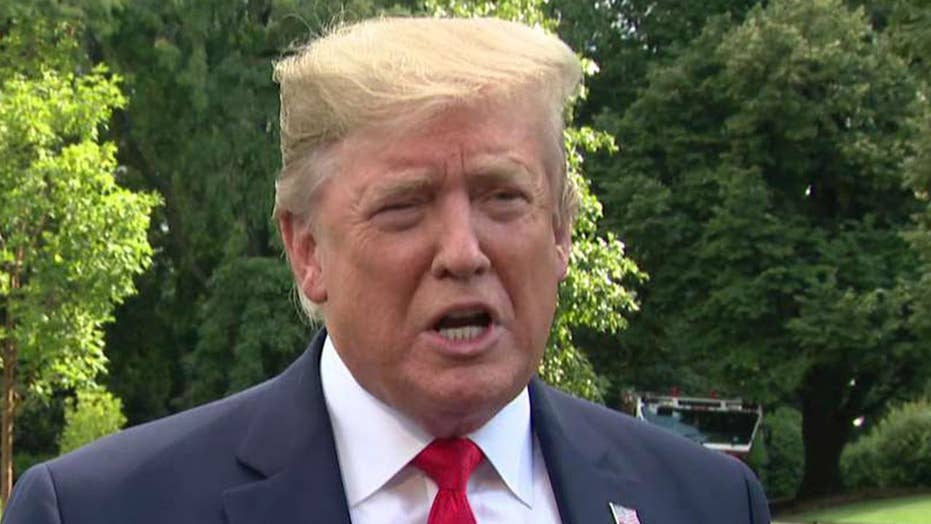 Trump says there was no defense for this 'ridiculous hoax,' in response to Robert Mueller's testimony before the House Judiciary and Intelligence Committees.

President Trump slammed former Special Counsel Robert Mueller's testimonies before two House committees on Wednesday afternoon, saying he "did a horrible job both today and with respect to the investigation," but "in all fairness to him he had nothing to work with."

Trump called to "investigate the investigators," reiterating his sentiments that Mueller's Russia investigation that spanned over two years was a "ridiculous hoax" and a "witch hunt that's been going on for a long time."

During his testimony, Mueller denied Trump's assertions that the investigation was a "witch hunt" and insinuated that the Trump campaign welcomed Russian aid to help them win the 2016 election.

In a fiery news conference, where the president pointed to multiple news agencies in the press pool calling them "fake news," he said Democrats will "never give up" trying to indict him for crimes related to Russian meddling in the 2016 election.

Indeed, Rep. Al Green, D-Texas, who previously introduced articles of impeachment against Trump in the House of Representatives but to no avail, said Wednesday that he would continue to champion impeachment, saying, "We cannot allow the president to go unchecked."

"The Democrats lost so big today," Trump said outside the White House on Wednesday afternoon. "Their party is in shambles right now. They've got 'the Squad' leading their party. They are a mess," he said adding that this was a "devastating day for the Democrats."

Trump said the investigation was nothing but a "phony cloud" calling out Reps. Adam Schiff, D-Calif., Jerry Nadler, D-N.Y., Chuck Schumer, D-N.Y., and Nancy Pelosi, D-Calif., saying that "every one of them knew it was all phony stuff."

"The Democrats had nothing. And now they have less than nothing," Trump said. "I think they're gonna lose the 2020 elections, including congressional seats because of the path they chose."

Trump praised his Republican colleagues, calling them "warriors" and commending them for "defending our country."

Mueller confused lawmakers and the public when he initially testified in front of the House Judiciary Committee Wednesday that if it were not for the Office of Legal Counsel rule that says a sitting president can not be indicted while in office, Mueller would have criminally charged the president based on the findings of his investigation.

“The reason that you did not indict the president is because of the OLC opinion that you cannot indict a sitting president, correct?” Rep. Ted Lieu, D-Calif. asked Mueller.

Mueller backpedaled on these remarks at the top of the second hearing of the day in front of the House Intelligence Committee, saying “I want to add one correction to my testimony this morning. I want to go back to one thing that was said this morning by Mr. Lieu, who said and I quote, ‘You didn’t charge the President because of the OLC opinion. That is not the correct way to say it. As we say in the report and as I said at the opening, we did not reach a determination as to whether the President committed a crime.”

When asked by lawmakers whether or not the findings of the investigation truly exonerated the president, Mueller responded "No."

Trump attacked Mueller over his statement saying "he didn't have the right to exonerate," despite Trump repeatedly using Mueller's summary report as evidence that it exonerated him from wrongdoing shortly after it was released in April.