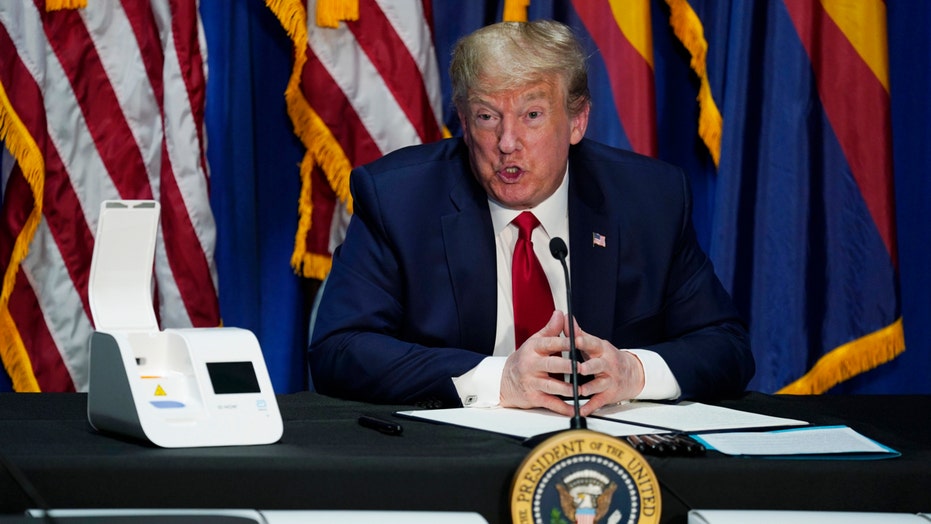 President Trump said he views Americans as “warriors” in the fight against coronavirus, as he made the argument for reopening economies across the country in the near future.

"I'm viewing our great citizens of this country to a certain extent, and to a large extent, as warriors. They're warriors. We can't keep our country closed,” Trump said after a roundtable discussion about supporting Native Americans in Arizona.

Trump predicted that after reopening, the economy next year would rebound. He acknowledged that “nothing can ever happen” that will replace a loved one lost to coronavirus, but “purely from an economic standpoint,” next year would be “one of the best ever.”

When asked why now is the time to reopen despite a possible coronavirus resurgence, Trump responded, “We can’t keep our country closed the next five years.”

“Doctors say let's keep closed for a couple of years?” he continued. “This is the U.S.A. I've created the greatest economy in the history of the world, best employment numbers, record stock markets, then one day, have to close.”

While the virus may come back, the president said: “It’ll be a flame, and we’ll put the flame out.” He added that those above 60 or 65 would be asked to “stay back” a while, but because the virus rarely affects young children, he hoped for schools to open on time.

When asked if his coronavirus task force would be winding down soon, Trump said he was looking to put together a different group focused on safety and reopening. He said he would still welcome the input of Dr. Anthony Fauci and Dr. Deborah Birx.