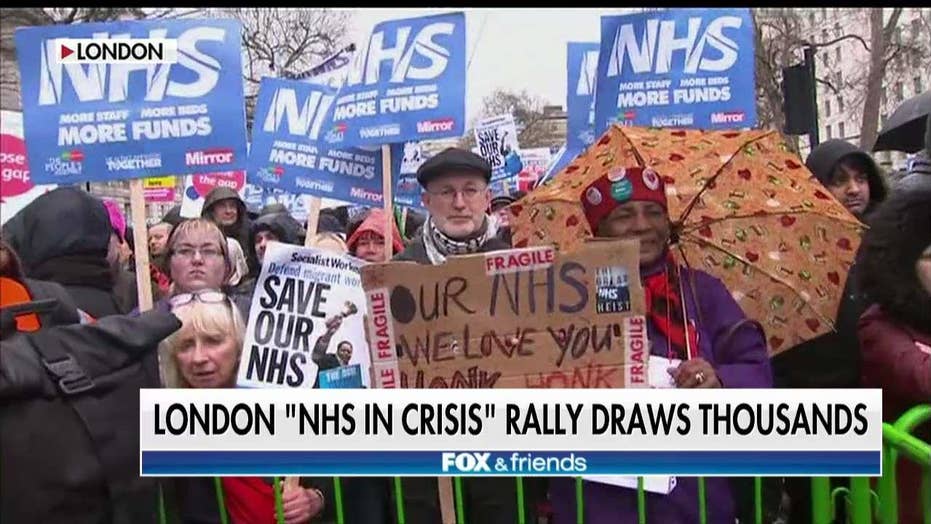 President Trump has riled U.K. leaders by wading into a sensitive debate over their health care service -- though the socialized system is visibly plagued by a winter crisis that has slashed services and led to claims that patients are dying in corridors and ambulances.

Trump commented Monday on a weekend march in London calling for more funding for the U.K.’s National Health Service (NHS) by describing the NHS as “going broke” and criticizing Democrats for wanting to imitate the system.

The march was a broadly pro-NHS march that criticized the ruling Conservative government for not providing enough funding for the system. However, signs at the march calling for the NHS to be “saved” also included statements declaring the NHS “broken.”

The government has noted it's increased funding by billions every year, but critics say it is not enough in what has been a decades-long war over NHS funding.

Those calls have become more urgent in recent weeks as the NHS has been hit by a “winter crisis” which saw tens of thousands of non-urgent surgeries canceled across England for more than a month, and widespread reports of hospitals simply unable to cope.

The Guardian reported this week that even some urgent surgeries -- such as cancer and heart surgeries -- are being canceled in some hospitals.

Trump’s tweet appeared to be responding to a segment on "Fox & Friends," in which former U.K. Independence Party leader Nigel Farage said the crisis was fueled by a surge in population from migration that risked tearing the NHS apart.

“We do need some absolutely fundamental reforms. This system that we had was set up in 1948 and actually, surprisingly for a state run thing, for most of the first 50 years people had great faith in it," Farage said. "Right now, it’s pretty much at breaking point.”

Concern about an NHS in crisis was also shared by left-wing Labour Party leader Jeremy Corbyn, who tore into the state of the NHS in Parliament in January, giving this gloomy summary:

“Mr. Speaker, the prime minister must be aware of ambulances backed up in hospital car parks with nurses treating patients in the back of ambulances, ambulance drivers and paramedics desperate to get on to deal with the next patient can't leave because the patient they are dealing with at that moment can’t get into the [ER]," he said.

Corbyn also cited an instance where someone froze to death after waiting 16 hours for an ambulance and another who waited four hours after a fall. However, his remarks made clear that he was not pushing for reform of the decades-old system but simply calling for another influx of funding.

Labour leader Jeremy Corbyn has blasted the state of the NHS. (Reuters)

“People are dying unnecessarily in the back of ambulances and in hospital corridors. GP numbers are down, nurses are leaving, the NHS is in crisis,” he said. "Mr. Speaker, Tory MPs might not like this, but I ask this question of the prime minister: When is she going to face up to the reality and take action to save the NHS from death by a thousand cuts?”

Prime Minister Theresa May responded by saying her government was putting more money into the NHS and recruiting more doctors and nurses “to ensure our NHS remains a world-class health care system, indeed the best health care system in the world.”

But after Trump’s comments, politicians on both sides of the aisle touted the strengths of the system. Health Secretary Jeremy Hunt used Twitter to fire back at Trump and also attack the American health care system.

A spokesman for 10 Downing Street told Sky News that Hunt spoke for the government on the matter.

"The Prime Minister is proud of having an NHS that is free at the point of delivery," the spokesman said. "NHS funding is at a record high and was prioritised in the budget with an extra £2.8 billion."

Jeremy Corbyn, who had painted the Dickensian nightmare to Parliament in January, said that people were marching because “they love our NHS” and they hate “what the Tories are doing to it.”

The British public has had what to outsiders may seem an unusual relationship with their health care system, which has been described as the U.K.’s true “national religion." Despite the frequent crises and many problems the NHS faces, Brits are fiercely defensive of the system, as well as to attempts at reform. But some commentators said that Trump hit the nail on the head.

“Where Trump is right is that the NHS is broken. Unlike other European countries, it exists in a state of perpetual crisis,” Kate Andrews at the Institute of Economic Affairs, a U.K. free-market think-tank, told Fox News. “The single-payer system, coupled with changing demographics, has led to problematic rationing and extending waiting times."

Andrews also poured cold water on Democratic hopes to mimic such a system in the U.S.

“It is certainly not a system the U.S. would want to emulate. Its patient outcomes are terrible, compared to European counterparts. IEA research has found that tens of thousands of lives could be saved per year if British patients were treated on by other health care systems,” she said.

Trump’s remarks mark the latest in a series of controversies for the U.S.-U.K. relationship since Trump took office. However, meeting at Davos last month with May, Trump attempted to quash rumors that relations between the two leaders were strained.

“I have a tremendous respect for the prime minister and the job she's doing,” Trump said. “And I think the feeling is mutual from the standpoint of liking each other a lot.”