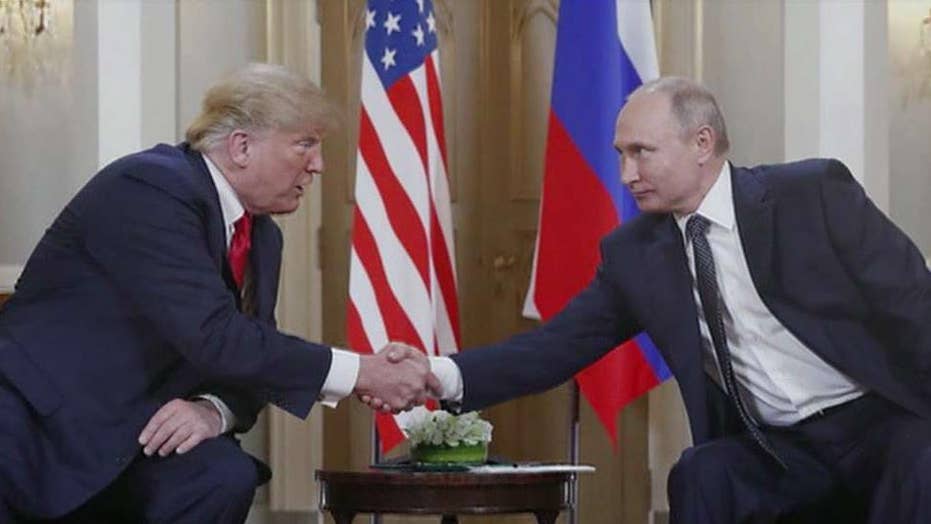 President Trump spoke with Russian President Vladimir Putin on Friday and discussed a range of issues, including nuclear weapons, a three-party arms control agreement and the conflict in Venezuela.

Trump and Putin, who according to the White House spoke for “a little over an hour,” discussed other topics as well, including North Korea, Ukraine, trade and the special counsel's Russia investigation.

“Had a long and very good conversation with President Putin of Russia. As I have always said, long before the Witch Hunt started, getting along with Russia, China, and everyone is a good thing, not a bad thing,” Trump tweeted Friday after the call. “We discussed Trade, Venezuela, Ukraine, North Korea, Nuclear Arms Control and even the “Russian Hoax.” Very productive talk!”

From the Oval Office on Friday, the president told reporters some of the details of his talks with Putin on a potential nuclear deal.

“We’re talking about a nuclear agreement where we make less, and they make less, and maybe even where we get rid of some of the tremendous firepower we have now,” Trump said. “We’re spending billions of dollars on nuclear weapons. We need that, but we are also ... looking at a three-way deal instead of a two-way deal.”

Trump explained that the U.S. would “probably start something up shortly between Russia and ourselves,” and that “China would be added down the road.”

It is unclear which arms control agreement was discussed, but Russian state news agency Tass reported that Trump and Putin spoke about the New START treaty, the last major arms-control treaty remaining between the U.S. and Russia.

The treaty was signed in 2010 and expires in 2021; it restricts both the U.S. and Russia to 1,550 deployed strategic nuclear warheads on a maximum of 700 deployed intercontinental ballistic missiles and strategic bombers.

“There was a discussion about having — extending the current nuclear agreement — as well as discussions about potentially starting a new one that could include China as well.”

Trump said China “very much” wants to be a part of that potential nuclear deal.

In his administration, though, Trump exited the 1987 Intermediate-Range Nuclear Forces Treaty, the decades-old nuclear arms treaty with Russia. He accused Moscow of violating the treaty by deploying missiles banned by the pact. Moscow denied violating the treaty.

A Kremlin readout of the call said the two presidents confirmed their mutual desire "to intensify dialogue in various fields, including on issues of strategic stability," but gave no additional details.

The statement released by the Kremlin after Friday's call said Putin stressed that "Pyongyang's conscientious fulfillment of its obligations should be accompanied by reciprocal steps to reduce sanctions pressure on North Korea."

The two leaders also spoke about Venezuela. Trump said Putin said he was "not looking to get involved," but would "like to see something positive happen." Trump said the U.S. wanted to offer "some humanitarian aid."

"We want to help on a humanitarian basis," Trump said.

Meanwhile, Sanders said the two spoke “very, very briefly” about the Russia investigation. But Trump told reporters from the Oval Office Friday that Putin always knew that there had been no collusion between the Kremlin and the Trump campaign.

“We discussed it and he actually sort of smiled when he said something to the effect that it started off as a mountain and it ended up as a mouse,” Trump said. “But he knew that because he knew there was no collusion.”

Trump also blasted the Russia investigation, calling it, as he frequently does, the “Russian Hoax” and a “total witch hunt.” The president also again declared that there was “no collusion” and “no obstruction.”