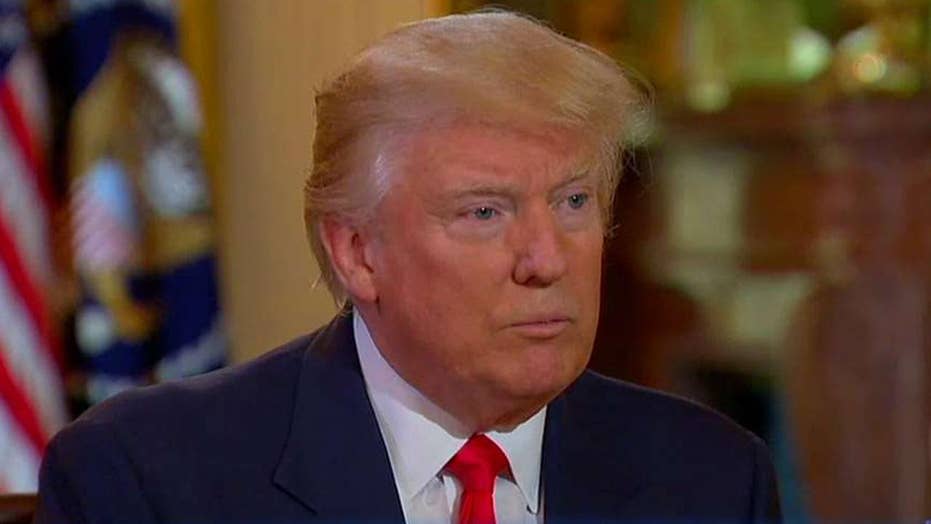 The president speaks out on 'Fox & Friends'

President Trump said in an exclusive interview Tuesday that his address to Congress this evening will focus on the central planks of his campaign – the military, the border, jobs and health care – and he took responsibility for any communications miscues that have blunted the effectiveness of his message in the early days of the administration.

Trump, in an interview with “Fox & Friends,” specifically cited his immigration policy, and said that perhaps the rollout of his plan to keep out and remove criminal illegals hadn’t been communicated effectively.

He later awarded himself a grade of a “C” or “C-plus” on communicating, straightforwardly saying, “My messaging isn’t good.” He clarified that he would give himself an "A" for achievement and "A-plus" for effort.

Trump added on immigration: “We’re getting the bad ones out, the bad people, gang people, drug lords, in some cases, murderers,” echoing the campaign rhetoric that dominated speeches from Day 1 of his candidacy for the GOP presidential nomination.

“I’m much tougher in getting the bad guys out,” Trump said, contrasting himself with former President Barack Obama. “He was much less focused on that.”

On health care, Trump said the yet-to-be released replacement for ObamaCare is “really terrific” and “inclusive,” and he said Congress is right not to be hasty in repealing the current law.

“I think we have a great plan and I think Congress is absolutely taking a lot of blame, but it’s not their fault,” Trump said. “I’ve only been here for – what is this my fifth week?”

As the president plans to boost the military, Trump’s proposed $54 billion increase in defense spending is coming largely from cuts to the State Department and Environmental Protection Agency. He suggested Tuesday that foreign aid would be a target of the cuts.

“We’re going to do things having to do with other countries because we’re treated very, very unfairly,” Trump said. “…We’re taking care of their military and we’re not being reimbursed. They’re wealthy countries.”

Trump pledged to use his “Art of the Deal” expertise to drive down costs, as well.

“I am going to get involved in negotiating,” Trump said. “We have many planes and boats and ships … we’re spending too much money individually on.” He said the U.S. would “get a lot more product for our buck.”

Trump also said some of the monetary increases would “come from a revved up economy” and pointed to the numerous manufacturers and car makers – such as Carrier, GM and Ford – that have announced investments in U.S.-based factories and jobs since he was elected. Previously, Trump said, “they were fleeing this country.” Meanwhile, a bullish stock market has created “trillions of dollars in value.”

Part of Trump’s plan to add jobs had been stalled by the amount of time it took for the Senate to confirm Scott Pruitt, now the EPA administrator. When Pruitt “gets going” it’s going to mean “thousands and millions of jobs,” Trump said.

“We have hundreds and hundreds of massive deals that are tied up in environmental protection,” he said.

Though he pledged to give the U.S. “the greatest military we’ve ever had by the time I finish,” Trump spoke somberly about the Jan. 29 special operations mission in Yemen that resulted in the death of a Navy SEAL. Sen. John McCain – a frequent Trump foil – had criticized the daring raid, saying he would “not describe any operation that results in the loss of American life as a success.” Trump said McCain’s remarks were “inappropriate.”

“I feel badly when a young man dies and John McCain says, ‘That was a failed mission,’” he said.

Trump also ramped up his war with the press, questioning whether many journalists are simply making up the stories he’s infamously derided as “fake news.”

The White House has been plagued by a deluge of leaks leading to a series of politically embarrassing stories, and it was reported that Press Secretary Sean Spicer, in an attempt to stem the flow, called a meeting with dozens of aides and searched their electronic devices. While Trump is eager to find the source – or sources – of the leaks, he disagreed with Spicer’s controversial methodology.

He added: “Sean handles it his way and I’m okay with it.”

Trump said the administration had “sort of ideas” who had been leaking information.