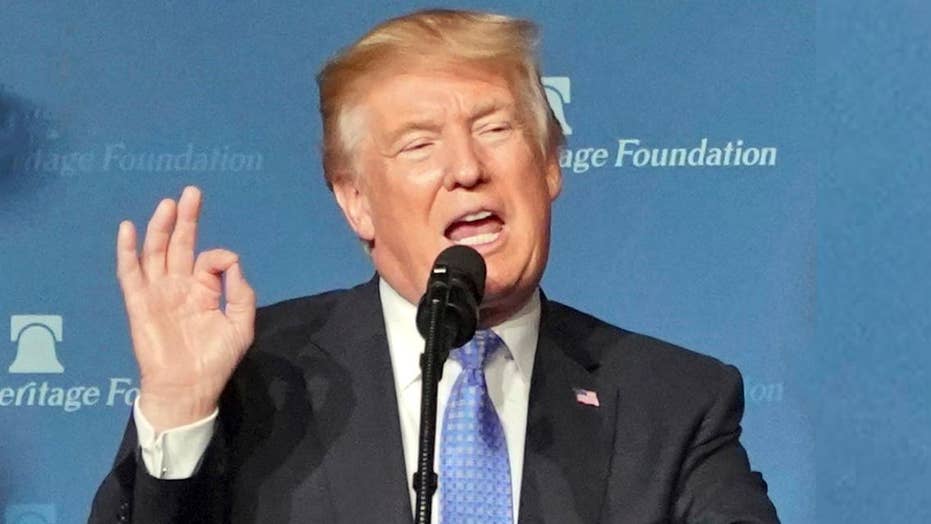 Trump: I will always put the needs of our country first

The president addresses The Heritage Foundation.

President Trump told a conservative think tank Tuesday night that his tax plan was "a once-in-a-generation opportunity to revitalize our economy, renew our industry, and renew the American dream."

In his speech to the Heritage Foundation's President's Club, Trump implored his audience to contact their Congress member and "give America the best present of all: massive tax relief."

The president was frequently interrupted by applause, and some in the audience broke into cheers when Trump promised his plan would repeal what he called "the horrible and very unfair estate tax."

Trump's tax plan would lower the corporate rate from 35 percent to 20 percent, reduce the number of individual income tax brackets and double the standard deduction. But it would also remove the personal exemption and possibly much of the deduction for state and local taxes -- changes that could increase taxes for many families.

As he talked up the plan, Trump repeated his administration's assertion that the corporate tax cut and other changes would lead to a $4,000 pay raise for the average American family -- a claim that has been met with skepticism from tax experts and Democratic lawmakers who say the administration's math is flawed.

Trump touched on other topics during his speech, which lasted approximately 25 minutes. Most notably, he appeared to back off support for a bipartisan deal meant to extend federal payments to health insurers under ObamaCare.

The proposal by Sens. Lamar Alexander, R-Tenn., and Patty Murray, D-Wash., would continue the payments for another two years. Trump had signed an executive order cutting off the funding to insurers last week. The Heritage Foundation has come out against the proposal.

"I’m pleased that Democrats have finally responded to my call for them to take responsibility for their ObamaCare disaster and work with Republicans to provide much-needed relief to the American people," needled Trump before adding, "While I commend the bipartisan work done by Senators Alexander and Murray -- and I do commend it -- I continue to believe Congress must find a solution to the ObamaCare mess instead of providing bailouts to insurance companies."

Trump also returned to one of his favorite topics, arguing that the U.S. should preserve statues of controversial historic figures, not tear them down.

"Now, they’re even trying to destroy statues of Christopher Columbus," Trump lamented. "What’s next? [It] has to be stopped, it's heritage."

"We believe," the president added, "that young Americans should be taught to love our country, honor our anthem, and proudly recite the Pledge of Allegiance."