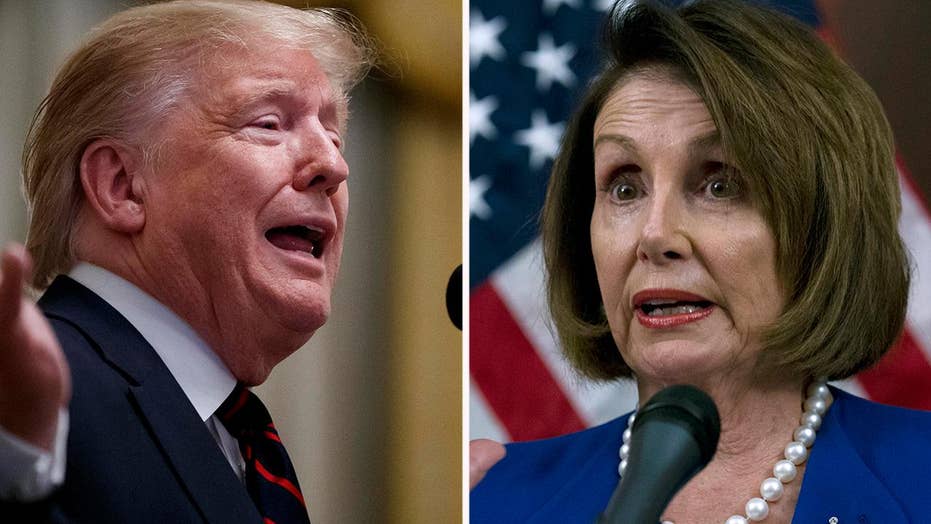 President Trump and House Speaker Nancy Pelosi, D-Calif., heated up their ongoing war of words after a White House meeting on Syria devolved into name-calling and led to Democrats storming out, with both sides accusing the other of a "meltdown."

Pelosi, along with Senate Minority Leader Chuck Schumer, D-N.Y., and House Majority Leader Steny Hoyer, D-Md., walked out of the meeting Wednesday afternoon, which had been intended to discuss the administration’s decision to pull troops out of northern Syria. That decision has sparked bipartisan criticism that the decision betrays the Kurds, while giving a boost to ISIS.

Pelosi on Thursday gave her account of what happened, telling reporters during a Capitol press conference that she asked Trump what the plan was in Syria -- to which Trump said his plan was “to protect America,” which Pelosi said was only a goal. She also asked why, if the goal was to bring troops home, troops were also being sent to Saudi Arabia.

She also said that she had told Trump that, with him, “all roads seem to lead to [Russian President Vladimir] Putin.”

Pelosi noted that the Russians have been trying to get a foothold in the Middle East for a while, which she says they now have achieved. She also said that Putin benefits from any withholding of aid from Ukraine -- which Trump had tried to do over the summer, before it was overturned by Congress.

“Russians benefited, Putin did, when the president placed some doubt about our commitment to NATO right from the start of his administration,” she said. “All roads lead to Putin.”

The apparent reference to Putin having some sort of hold over Trump suggests that Pelosi was ready to punch just as hard as Trump when it came to tarring a political opponent, and gives a glimpse of how the meeting devolved so quickly. 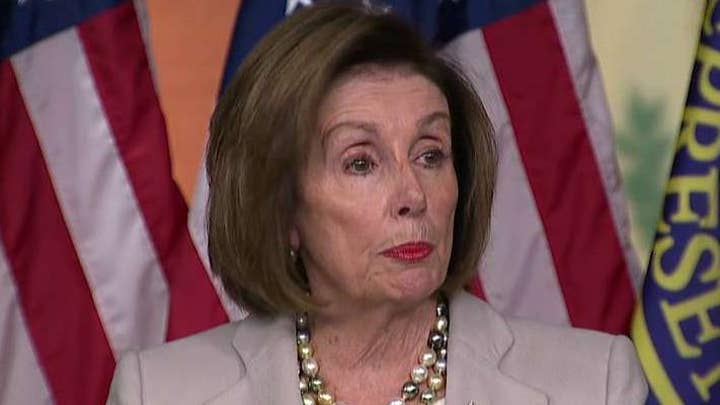 A senior Democratic aide told Fox News that Trump began the meeting, which was ostensibly called by the White House, by remarking that "someone wanted this meeting so I agreed to it."  Trump also reportedly told Pelosi, "I hate ISIS more than you do," prompting Pelosi to respond, "You don't know that."

Schumer said that the walkout happened after Trump referred to Pelosi as a “third-rate politician.” As the Democrats walked out, Trump reportedly remarked “I’ll see you at the polls.”

Trump responded to the Democrat walkout on Wednesday by showing photos of the meeting, with the caption: “Nervous Nancy’s unhinged meltdown!” Pelosi subsequently made it her banner on her Twitter profile.

He also tweeted out a picture of Pelosi, Hoyer and Schumer looking angry, with the caption: “Do you think they like me?”

"The President was measured, factual and decisive, while Speaker Pelosi's decision to walk out was baffling, but not surprising," Grisham said. "She had no intention of listening or contributing to an important meeting on national security issues. While democratic leadership chose to storm out and get in front of the cameras to whine, everyone else in the meeting chose to stay in the room and work on behalf of this country."

Pelosi meanwhile made similar suggestions about Trump’s health to those that Trump made about her own health.

The relationship between the president and the speaker has worsened in recent weeks with the announcement by Pelosi of an impeachment inquiry into Trump's actions in relation to Ukraine. But the meeting is not the first that has devolved into name-calling and raised voices. In December, a similarly fiery meeting played out in front of reporters in the Oval Office as they clashed over government funding for the wall on the southern border -- where Trump threatened to shut down the government.

Schumer raised his voice, claiming he could pass measures to keep the government running regardless, as Trump said he was "proud to shut down the government for border security" and will "take the mantle."

Pelosi noted at the time, "This has spiraled downwards."