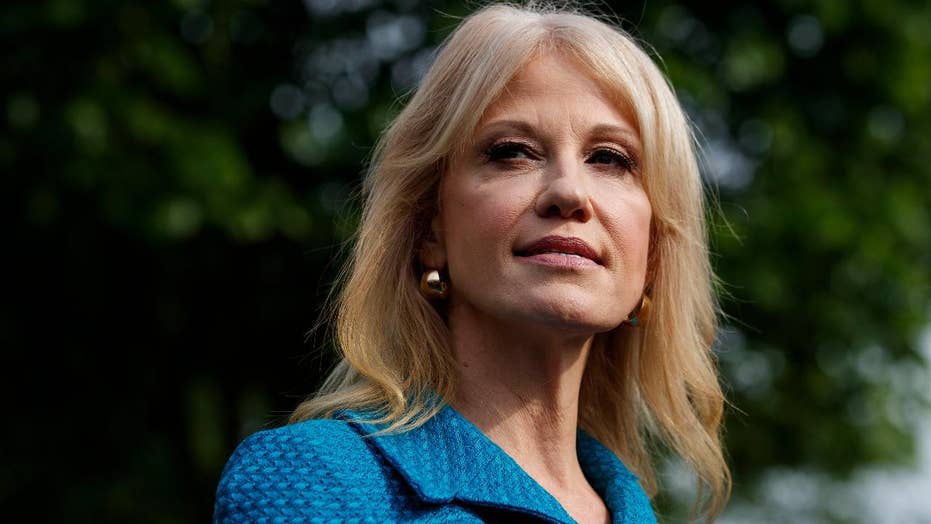 Trump defends Kellyanne Conway after recommendation to remove her from office

President Trump in a phone call with 'Fox &amp; Friends' says he will not fire his counselor amid accusations that she violated the Hatch Act, saying her freedom of speech is trying to be taken away.

President Trump, in an exclusive interview Friday morning with “Fox & Friends,” said he will not fire adviser Kellyanne Conway in the wake of a government watchdog’s recommendation that she be removed over violations of the Hatch Act.

The Hatch Act limits certain political activities of federal employees. In an explosive report released a day earlier, the Office of Special Counsel (which is separate from the office with a similar name previously run by Robert Mueller) cited Conway for repeatedly violating the law with political statements about Democratic presidential candidates in media interviews and on Twitter.

Trump, though, said: “It looks to me like they’re trying to take away her right of free speech.”

He even suggested he would not counsel Conway to tone it down.

“It doesn’t work that way,” Trump said, arguing that Conway was merely responding to political attacks against him. “A person wouldn’t be able to express themselves, and I just don’t see it.”

Trump noted that he will be getting a briefing on the findings.

Special Counsel Henry Kerner, meanwhile, defended his office’s work in an interview with Fox News on Thursday. Still, he was deferential to Trump, making clear the decision on whether to remove Conway is his alone.

In the interview, Kerner said his office had “several discussions” with the White House counsel and they had the OSC report “for weeks.” He said this was “not some sort of a drop-it-on-them situation.”

“I am a Trump appointee—I have no animus toward Kellyanne whatsoever,” he added. “My job is to make sure the federal workforce stay as depoliticized and as fair as possible.”

The White House on Thursday had slammed the report as “unprecedented” and suggested it was politically influenced.

Kerner, though, said not offering recommendations for disciplinary action was “a bad signal to federal workers.”

The OSC report itself stated that in one Feb. 19 interview on "Fox & Friends," Conway “insinuated that Senator Booker was ‘sexist’ and a ‘tinny’ ‘motivational speaker,’” and claimed Sen. Elizabeth Warren, D-Mass., was “'lying'” about her ethnicity. Conway also “attacked” former Rep. Beto O’Rourke for not “thinking the women running are good enough to be President.”