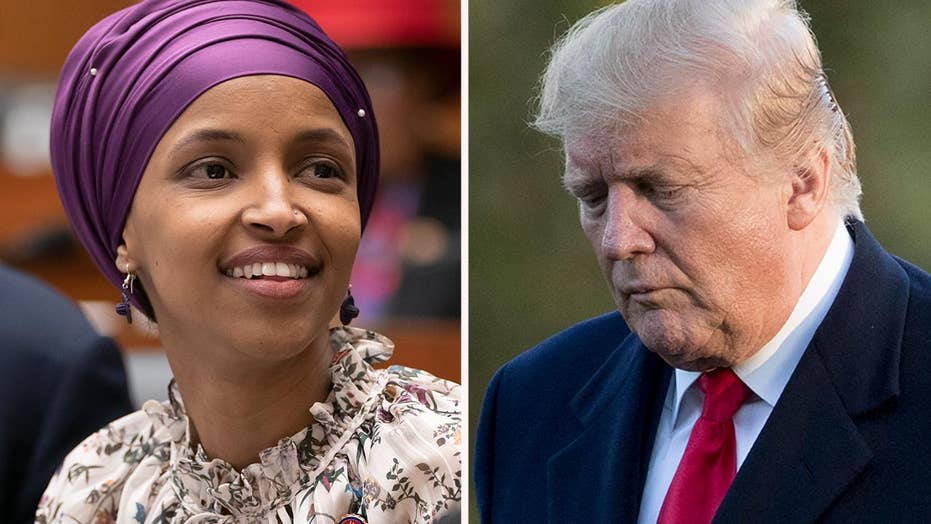 President Trump and Rep. Ilhan Omar clashed anew Wednesday after the president shared a post on Twitter that inaccurately suggested the freshman congresswoman "partied" on Sept. 11 -- and said the Minnesota Democrat would help him “win” back her state in 2020.

Early Wednesday, the president shared a post from comedian Terrence K. Williams, who tweeted a video which seemed to show Omar dancing. Williams tweeted that Omar “partied on the anniversary of 9/11 because she believes ‘Some People Just Did Something’,” referring to the lawmaker's controversial description of the attacks as she lamented that Muslims in general lost civil liberties because of the attacks carried out by "some people."

TRUMP SAYS DEMOCRATS ARE 'PARTY OF THE SQUAD'

Trump responded Wednesday stating: “Ilhan Omar, a member of AOC Plus 3, will win us the Great State of Minnesota. The new face of the Democrat Party!”

Later Omar fired back, correcting the president and accusing him of spreading misinformation. And Williams' tweet has since been deleted.

“This [video] is from a CBC event we hosted this weekend to celebrate black women in Congress,” Omar tweeted. “The President of the United States is continuing to spread lies that put my life at risk. What is Twitter doing to combat this misinformation?”

Omar said the video of her dancing was taken over the weekend during the Congressional Black Caucus's annual legislative conference in Washington, D.C., held from Sept. 11 through Sept. 15. The video surfaced on Twitter on Friday, Sept. 13.

Back in March, Omar drew widespread criticism with comments she made at a fundraiser for the Council on American-Islamic Relations.

“Here’s the truth: Far too long we have lived with the discomfort of being a second-class citizen and, frankly, I’m tired of it, and every single Muslim in this country should be tired of it,” she said on March 23. “CAIR was founded after 9/11 because they recognized that some people did something and that all of us were starting to lose access to our civil liberties.”

Last week, on the 18th anniversary of the attacks, a New Jersey resident ripped Omar for those comments.

“Madam, objectively speaking, we know who and what was done,” Nicholas Haros Jr., who lost his mother on 9/11, said during a reading of victims’ names at Ground Zero last week. “There is no uncertainty about that. Why your confusion?”

He continued: “On that day, 19 Islamic terrorists, members of Al Qaeda, killed over 3,000 people and caused billions of dollars of economic damage. Is that clear?”

He added: “That’s what some people did,” Haros concluded. “Got that now? We are here today, congresswoman, to tell you and the Squad just who did what to whom. Show respect in honoring them, please.”

Meanwhile, the president has clashed with Omar and other members of “The Squad” repeatedly. The group consists of four freshmen congresswomen—Reps. Alexandria Ocasio-Cortez, D-N.Y., Rashida Tlaib, D-Mich., Ayanna Pressley, D-Mass., and Omar. The group has been outspoken in their criticisms of the president and the administration since their election.

Trump, in June, suggested the lawmakers should “go back and help fix the totally broken and crime-infested places where they came from.”

“Then come back and show us how it is done,” Trump said in June.

At rallies, following his comments, Trump supporters broke into chants of “send her back,” which Trump later distanced himself from. The chants had been directed at Omar, D-Minn., who was born in Somalia, came to the U.S. as a refugee when she was a teen and is now a naturalized U.S. citizen.