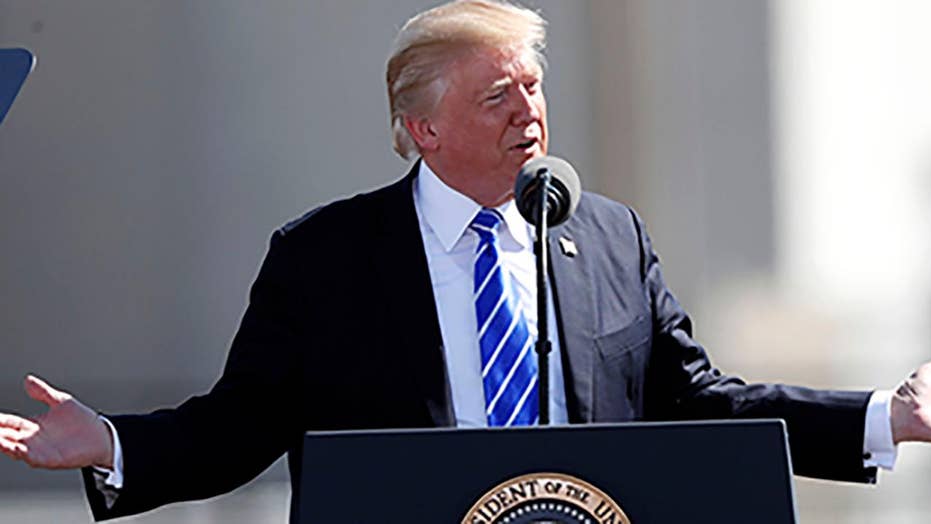 Trump continues to push his agenda by working with Democrats

It appears more deals with Democrats may be in the president's future after the president reinforced his new approach on Twitter; John Roberts has the roundup on 'Special Report'

President Trump on Thursday denied reports that he struck a "deal" overnight with top Democrats to protect so-called “Dreamers,” while insisting “massive border security would have to be agreed to in exchange for consent.”

Trump’s Twitter post was in response to Senate Minority Leader Chuck Schumer, D-N.Y., and House Minority Leader Nancy Pelosi, D-Calif., announcing after a dinner meeting at the White House that they had "agreed to a plan to work out an agreement to protect our nation’s DREAMers from deportation."

They also said "we would review border security measures that didn’t include building a wall."

The president clarified Thursday morning that he intends for the wall to be built -- and while he wants to helps Dreamers, there's no deal yet.

"No deal was made last night on DACA. Massive border security would have to be agreed to in exchange for consent. Would be subject to vote," Trump tweeted. "The WALL, which is already under construction in the form of new renovation of old and existing fences and walls, will continue to be built."

Trump, on the ground in Florida to survey hurricane damage, later told reporters they were “fairly close” on a deal but insisted a border wall “is vital.” He said they must have an understanding in some legislation to fund the wall, “otherwise we’re not doing anything.”

Shortly after their statement, the White House issued its own statement agreeing that the sit-down was productive, but the exclusion of the border wall "was certainly not agreed to."

Trump, before and after the dinner meeting, has voiced concern about the fate of the young illegal immigrants who had been protected under the Obama-era DACA program that he aims to reverse. The program shielded illegal immigrants who came to the U.S. as children from deportation. While Trump is rolling back the executive action that allowed it, he is giving Congress time to pass a legislative alternative -- a point he underscored Thursday.

"Does anybody really want to throw out good, educated and accomplished young people who have jobs, some serving in the military? Really! ... They have been in our country for many years through no fault of their own - brought in by parents at young age. Plus BIG border security," he tweeted.

Pelosi and Schumer, though, tried to dial down tensions by mid-morning, releasing a joint statement suggesting they’re actually all on the same page.

“President Trump’s Tweets are not inconsistent with the agreement reached last night,” they said. “As we said last night, there was no final deal, but there was agreement on” working to protect Dreamers with legislation.

They said they agreed the wall would not be part of this agreement, though Trump wants to pursue it later, and both sides agreed to “work out a border security package.”

Tensions between the White House and top Democrats remain on the issue, despite the dinner meeting.

White House Press Secretary Sarah Sanders said earlier Wednesday that Trump was “committed to the wall. It doesn’t have to be tied to DACA, but it's important and he will get it done.”

Matt House, Schumer’s communications director, responded on Twitter: “The President made clear he would continue pushing the wall, just not as part of this agreement.”

The New York Times cited a White House official who said Trump pushed for border wall funding at the meeting.

Beside the border wall issue, the Democrats said Trump agreed to enshrine protections for the nearly 800,000 immigrants brought illegally to this country as kids who had benefited from the DACA program.

House Speaker Paul Ryan, who also sat down with Pelosi to talk immigration Wednesday, said in an interview that deporting the so-called Dreamers was “not in our nation’s interest,” and said the president had “made the right call.”

“I wanted him to give us time. I didn’t want this to be rescinded on Day One and create chaos,” Ryan said, arguing the time would allow Congress to “come up with the right kind of consensus and compromise to fix this problem.”

The dinner took place in the White House’s Blue Room, sources told Fox News. The Congress members sat at a rectangular table with Trump at the head with Pelosi to his right, and Schumer to his left. Eleven people were in the room, sources said. The first half-hour addressed trade issues with China.

The meeting between the three came shortly after Trump overruled congressional Republicans and cut a deal with Democrats to raise the federal debt ceiling for three months. Some conservatives criticized the deal as a capitulation by Trump.

Trump, however, appears to see bipartisanship as a key to get legislation out of the starting gate.

“More and more we’re trying to work things out together,” Trump explained Wednesday, calling the development a “positive thing” for both parties.

“Some of the greatest legislation ever passed, it was done on a bipartisan manner. And so that is why we’re going to give it a shot,” Trump said.