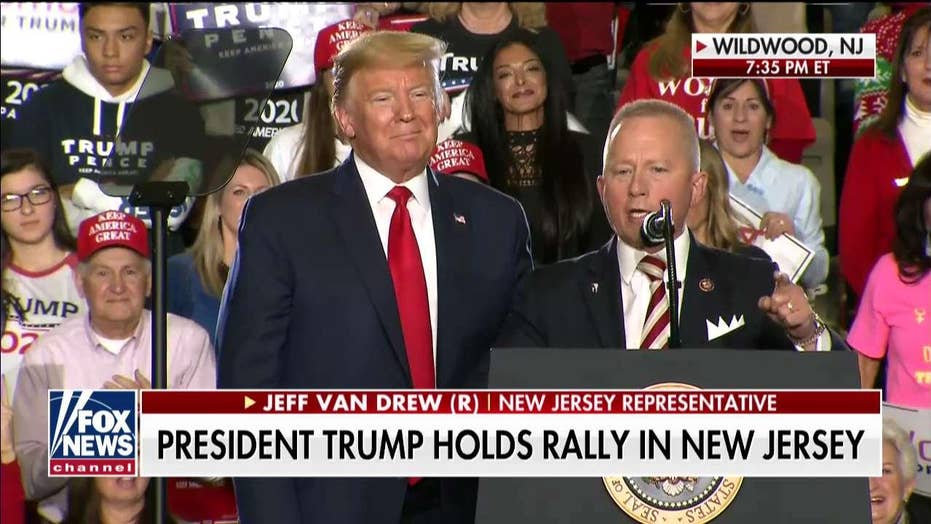 President Trump headlined a jam-packed rally in Wildwood, New Jersey, on Tuesday night, hours after his attorneys wrapped up their opening arguments in his Senate impeachment trial -- and minutes after sources told Fox News that Republicans don't have the votes yet to block additional witnesses who could extend the proceedings.

An elevated level of enthusiasm was evident in the larger-than-normal crowd sizes inside and outside the Wildwoods Convention Center, and Fox News spoke to several attendees who had been waiting more than 24 hours to ensure they would be seated.

"While we are creating jobs and killing terrorists, the congressional Democrats are obsessed with demented hoaxes, crazy witch hunts, and deranged partisan crusades," Trump said. "We will make sure they face another crushing defeat in the next election."

Hotels ordinarily closed for the winter were open for business and largely sold out. Bars and restaurants offered drink specials like the "MAGA-Rita" and the "subpoena-colada" -- bringing to life what was normally a ghost town in the cold days of January on the Jersey Shore.

"We have tens of thousands of people outside," Trump said to chants of "Four more years!" and other cheers. "If anyone would like to give them your place, please let us know."

Trump campaign manager Brad Parscale said that the campaign had received 158,632 requests for tickets at the event, including 92,841 distinct signups, and had identified a total of 73,482 voters --10.4 percent of whom didn't vote in 2016, and 26.3 percent of whom were self-described Democrats.

The president, again and again, touted the "blue-collar boom" in the economy -- including historically low unemployment, rising wages especially among low-income workers, and soaring markets.

"Earnings for the bottom 10 percent are rising faster than earnings for the top 10 percent, for the first time ever," Trump said. "Since my election, the net worth for the bottom half of wage-earners has increased by 47 percent, three times faster than the increase for the top one-percent. Median household income is at an all-time high; for President Bush, in eight years it was $450. Under President Barack Hussein Obama, for eight years, it was $975. ... Under your favorite president, and when you include the tax cuts, the regulation cuts ... under President Trump, for three years, the number is almost $10,000 -- and it's going up. That's a big difference."

Democrats, by contrast, would "demolish" the U.S. economy, Trump said, noting that their health care plans -- including proposals to pay for the health care of illegal immigrants -- simply were too expensive and inefficient.

Touting his administration's recent victory in a key Supreme Court case on the so-called "public charge rule," Trump remarked, "We will now finally be able to enforce federal law and ensure that those seeking admission to our country are able to support themselves financially and not abuse taxpayer-funded programs."

He continued, "On no issue have Washington Democrats more thoroughly betrayed the American people than the issue of immigration."

Trump also hit Democrats for largely opposing restrictions on even late-term abortion, saying, "every child is a sacred gift from God." Trump recently became the first president to speak at the pro-life March for Life rally in Washington.

"I got it done, and I mean I solely got it done," Trump said to applause later, referring to the passage of his landmark criminal justice reform bill. "You have to thank yourself, because nobody else is going to do it."

The event in blue New Jersey was the capper on a busy day, which also included the historic unveiling of a new Middle East peace plan and a Los Angeles Times report that California Sen. Dianne Feinstein was considering a vote to acquit the president. Feinstein later said she was "misunderstood," and an Axios report accused the Times of having the story "backwards."

The chaos unfolded with the backdrop of looming Iowa caucuses next week, marking the first big milestone of the 2020 presidential campaign.

Trump was holding the rally along the beach in Wildwood in support of New Jersey Rep. Jeff Van Drew, who flipped to the Republican party last month after opposing House Democrats' impeachment of the president.

"This year, this very year is a flashpoint election," Van Drew said after Trump's introduction. "Are we going to allow ourselves just to be like any other nation in the world, or are we going to keep America great?"

Van Drew said at the event that there had been approximately 175,000 requests for seats at the venue, which typically holds 7,500.

The setting for the rally was atypical for Trump: a Jersey Shore city where people camped out overnight on the beach to get a spot in line for the rally being held at a boardwalk convention center. Campaign officials touted the raucous crowd, one that did not have many chances to see Trump in person and may draw in voters from the nearby battleground state of Pennsylvania.

"Welcome to 2 am the night BEFORE [a Trump] rally! Impeach this," Trump campaign Press Secretary Kayleigh McEnany tweeted, along with a video of bundled-up Trump supporters in American flag-adorned attire.

Cape May County on the southern tip of New Jersey reflected just how much loyalty Trump has commanded with voters outside the industrial heartland. Over 65 percent of its economy has come from tourism. The population has boomed from 90,000 year-round to over 670,000 in July and August.

However, the county has been seen as reliably safe swimming for Republicans — and a Trump event bringing in thousands of guests into a community largely shuttered for winter could be seen as an economic bonus for the hotels, motels and restaurants.

Trump celebrated Van Drew’s defection as a sign of cracks within the Democratic Party over impeachment, and during the rally, pointed to his switch as a sign that the inquiry was purely partisan.

"We believe Van Drew personifies a lot of Democrats in this country who have become disillusioned with their party over impeachment," a Trump campaign source told Fox News.

The event likely will resonate beyond the Jersey Shore, drawing in suburban Philadelphia voters at a moment when Pennsylvania is a must-win for the president in 2020, said Seth Grossman, an attorney who ran against Van Drew in 2018 as a pro-Trump Republican.

MASSIVE CROWDS FORM AHEAD OF TRUMP RALLY AMID IMPEACHMENT FIGHT

"He's sending a message that it's OK for Democrats to embrace Trump and Republicans, as opposed to feeling obligated to stay in the Democratic Party," Grossman said.

A crowd standing in the cold in front of the Wildwoods Convention Center as they waited to enter the rally. (AP Photo/Mel Evans)

Meanwhile, in Washington, Trump's legal team wrapped up its defense earlier in the day, setting up a 16-hour question period on Wednesday. Although Trump's acquittal by the Republican-controlled Senate is all but assured, his team has tried to minimize the political damage.

And, the president apparently was hoping to use impeachment to motivate his political base and independents disenchanted with impeachment to turn out in greater numbers this fall.

Jay Sekulow, one of his lawyers, used his time before the Senate to offer a list of attacks against Trump's perceived foes — from ousted FBI agents to secret federal courts — and to highlight what he saw as politically driven maneuvering by the Democrats to oust the president.

"Danger, danger, danger," he told senators. "That's politics. You're being called upon to remove the duly elected president of the United States. That’s what these articles of impeachment call for."

White House counsel Pat Cipollone, also part of the defense, added: "What they are asking you do is to throw out a successful president on the eve of an election, with no basis, and in violation of the Constitution."

In a dramatic primetime moment, the liberal constitutional law scholar reiterated that although he voted for Hillary Clinton, he could not find constitutional justification for the impeachment of a president for non-criminal conduct, or conduct that was not at least "akin" to defined criminal conduct.

"I'm sorry, House managers, you just picked the wrong criteria. You picked the most dangerous possible criteria to serve as a precedent for how we supervise and oversee future presidents," Dershowitz told the House Democrats, including head House impeachment manager Rep. Adam Schiff, D-Calif.