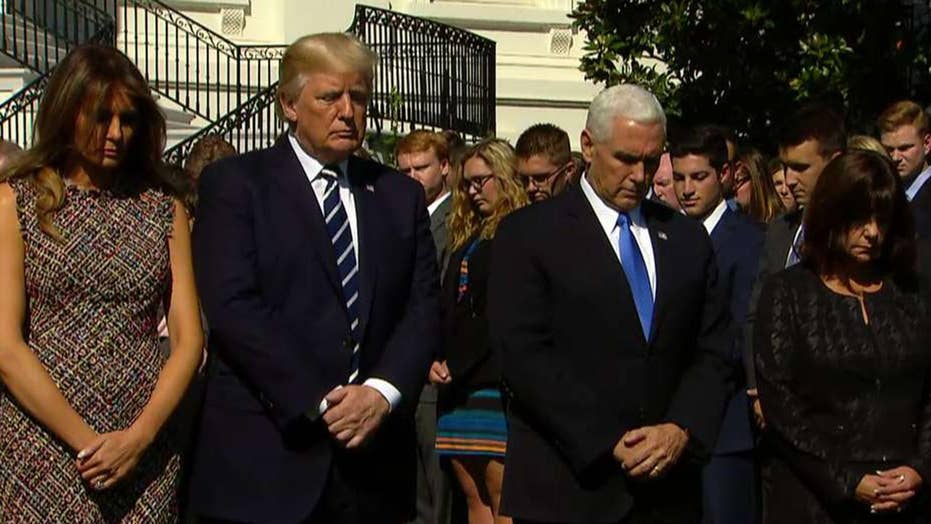 President Trump led a moment of silence at the White House on Monday afternoon to honor the victims of the Las Vegas massacre, as flags were ordered lowered to half-staff at government buildings across the country.

The attack, the deadliest mass shooting in modern U.S. history, killed at least 58 and left more than 500 hospitalized.

The president was joined by first lady Melania Trump, Vice President Pence and second lady Karen Pence for the moment of silence. The Senate held a similar tribute minutes later.

“Our nation is heartbroken. We mourn with all whose loved ones were murdered and injured in last night’s horrible tragedy in Las Vegas, Nevada,” the president said in a statement. “As we grieve, we pray that God may provide comfort and relief to all those suffering."

His proclamation ordered flags lowered at the White House and all public buildings, military posts and naval stations, and "vessels" of the federal government across the U.S. and its territories until sunset on Oct. 6. The president also directed flags to be flown at half-staff at U.S. embassies and facilities abroad.

“America woke up this morning to heartbreaking news,” Ryan said in a statement Monday. “This evil tragedy horrifies us all. To the people of Las Vegas and to the families of the victims, we are with you during this time.”

He added: “The whole country stands united in our shock, in our condolences, and in our prayers.”