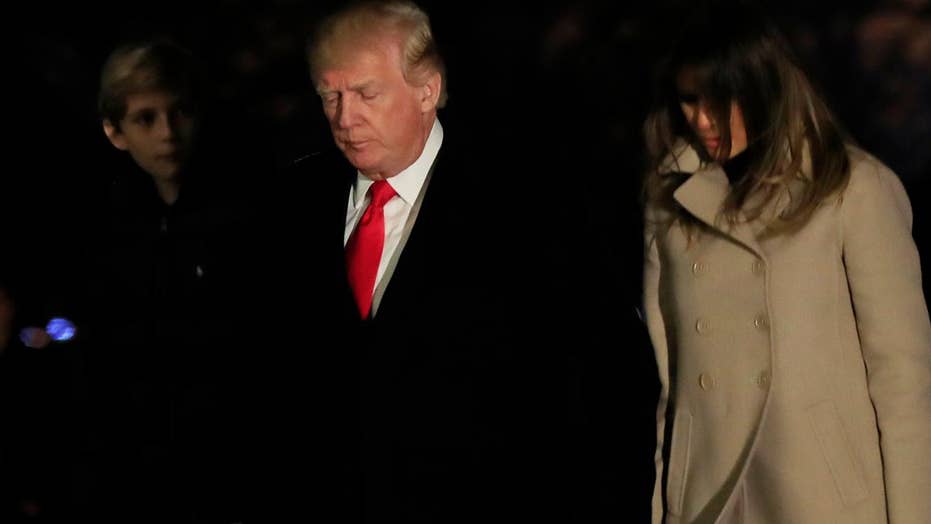 Trump tweets 'Iran is failing at every level'

Now we know what President Trump’s New Year’s resolution was – to tweet more.

The president kicked off his first full day back at the White House since the holidays with a tweet storm, taking aim at Hillary Clinton aide Huma Abedin and The New York Times, weighing in on the threat posed by North Korea and the upcoming fight over the Obama-era DACA program, amid other topics.

Coming as Congress returned to the Capitol, Trump’s ten tweets on Tuesday served as a reminder that the famously prolific tweeter-in-chief has no intention of curbing his frequent Twitter use – despite the desires of some Republicans in the White House and on Capitol Hill.

The president began his tweet storm Tuesday by knocking the “brutal and corrupt Iranian regime" and praising the people of Iran for “acting against” it.

“The people of Iran are finally acting against the brutal and corrupt Iranian regime. All of the money that President Obama so foolishly gave them went into terrorism and into their ‘pockets.’ The people have little food, big inflation and no human rights. The U.S. is watching!” Trump tweeted.

The spending on terror and proxy wars is part of what demonstrators are protesting.

Trump then went after "crooked" Clinton aide Huma Abedin, tweeting “Jail!” as he seemed to call on the “Deep State” Justice Department to look at potential security issues in her handling of classified material after a recent email dump.

The president’s tweet comes after the State Department, in a Friday news dump, released a batch of emails from Abedin’s account that were discovered by the FBI on a laptop belonging to her estranged husband, Anthony Weiner. At least four of the documents were marked “classified.”

In separate tweets, the president renewed his vow to build a wall on the border with Mexico, and also talked up the recent tax overhaul that passed in Congress before Christmas.

“Thank you to Brandon Judd of the National Border Patrol Council for your kind words on how well we are doing at the Border,” the president tweeted. “We will be bringing in more & more of your great folks and will build the desperately needed WALL!”

“Companies are giving big bonuses to their workers because of the Tax Cut Bill,” Trump tweeted. “Really great!”

Trump then reprised his “rocket man” label for North Korean leader Kim Jong Un, arguing that U.S. sanctions on North Korea are having a “big impact” on the rogue regime.

“Sanctions and 'other' pressures are beginning to have a big impact on North Korea. Soldiers are dangerously fleeing to South Korea,” he tweeted. “Rocket man now wants to talk to South Korea for first time. Perhaps that is good news, perhaps not -- we will see!”

The president then drew attention to reports indicating that 2017 was the safest year on record for commercial air travel, which saw no accident deaths. He seemed to argue he deserves some of the credit for that.

“Since taking office I have been very strict on Commercial Aviation,” Trump said. “Good news - it was just reported that there were Zero deaths in 2017, the best and safest year on record!”

Trump then wished a sarcastic good luck to the new publisher of the “failing” New York Times, A.G. Sulzberger, who took the reins from his father on Tuesday and was welcomed with a warning to hire better journalists and stop showing liberal bias.

“The Failing New York Times has a new publisher, A.G. Sulzberger. Congratulations! Here is a last chance for the Times to fulfill the vision of its Founder, Adolph Ochs, ‘to give the news impartially, without fear or FAVOR, regardless of party, sect, or interests involved,’” Trump tweeted.

Trump continued: “Get impartial journalists of a much higher standard, lose all of your phony and non-existent ‘sources,’ and treat the President of the United States FAIRLY, so that the next time I (and the people) win, you won’t have to write an apology to your readers for a job poorly done! GL.”

Despite his criticism of the paper, the president granted a much-buzzed about exclusive interview to a New York Times reporter last week at his Florida golf club.

In his last tweet of the morning, Trump predicted that Hispanics will soon turn on Democrats and start “falling in love” with Republicans and his presidency, claiming his political rivals are “doing nothing” to address the future of the Obama-era DACA program.

Trump is the one who ended that program, known as Deferred Action for Childhood Arrivals. It shielded from deportation thousands of immigrants brought illegally to the country as children.

However, Trump delayed the implementation of his own directive, giving Congress time to come up with a legislative alternative. Trump tweeted Tuesday that Democrats are missing their chance.

“Democrats are doing nothing for DACA -- just interested in politics. DACA activists and Hispanics will go hard against Dems, will start 'falling in love' with Republicans and their President! We are about RESULTS,” Trump wrote.

TRUMP’S MOST EXPLOSIVE TWEETS OF 2017

The tweeting continued into Tuesday afternoon.

In another tweet, the president praised David Shulkin, the secretary of the Veterans Affairs Department, and said “tremendous progress” had been made in caring for veterans.

“We will not rest until all of America’s GREAT VETERANS can receive the care they so richly deserve,” Trump said. “Tremendous progress has been made in a short period of time.”

By Tuesday evening, the president paid tribute to Utah Sen. Orrin Hatch, who announced his retirement from the Senate despite recent urging from Trump to stay.

And in several new tweets, Trump questioned whether the United States should provide aid to the Palestinians, after his administration said Monday it would withhold funding for Pakistan.

“It's not only Pakistan that we pay billions of dollars to for nothing, but also many other countries, and others. As an example, we pay the Palestinians HUNDRED OF MILLIONS OF DOLLARS a year and get no appreciation or respect,” the president tweeted.

Trump added, “They don’t even want to negotiate a long overdue peace treaty with Israel. We have taken Jerusalem, the toughest part of the negotiation, off the table, but Israel, for that, would have had to pay more. But with the Palestinians no longer willing to talk peace, why should we make any of these massive future payments to them?”

Almost two hours later, Trump took to Twitter to take a jab at Kim Jong Un and his “nuclear button,” which the North Korean leader warned he had on his desk in a New Year's Day address.

Trump tweeted, “North Korean Leader Kim Jong Un just stated that the 'Nuclear Button is on his desk at all times.' Will someone from his depleted and food starved regime please inform him that I too have a Nuclear Button, but it is a much bigger & more powerful one than his, and my Button works!”

The tweet also comes following a report that North Korean soldiers are given time off to find food, as a drought and international sanctions have left the government with reduced food rations.

“I will be announcing THE MOST DISHONEST & CORRUPT MEDIA AWARDS OF THE YEAR on Monday at 5:00 o'clock. Subjects will cover Dishonesty & Bad Reporting in various categories from the Fake News Media. Stay tuned!”

On Saturday, Trump defended his use of social media platforms like Twitter by saying he does it to “fight” back against news coverage he views as “dishonest and unfair.”

“I use Social Media not because I like to, but because it is the only way to fight a VERY dishonest and unfair 'press,' now often referred to as Fake News Media,” Trump tweeted. “Phony and non-existent ‘sources; are being used more often than ever. Many stories & reports a pure fiction!”

Still, some in his party have not been shy about expressing displeasure with his tweeting.

"I've been pretty candid with him and all of you that I'm not a fan of the daily tweets," Senate Majority Leader Mitch McConnell told reporters earlier this year.

But last week, McConnell told reporters he’s “warming up to the tweets."

"Regarding the president's tweeting habits, I haven't been a fan until this week,” he said.