President Donald Trump visited sites of riots and destruction in Kenosha, Wisconsin, amid the protests of the shooting of Jacob Blake.

President Trump on Tuesday got an up-close look at the damage caused by recent riots and looting in Kenosha, Wis. -- touring property damaged by the violence, blasting "anti-American" riots and promising to help devastated businesses rebuild.

“We’re going to get it fixed up, we’re going to help people rebuild their businesses in Kenosha...we’re getting it straightened out,” Trump told reporters as he begun his trip.

TRUMP TO VISIT RIOT-HIT KENOSHA, AFTER PROMISING 'NO TOLERANCE' FOR VIOLENCE

He toured the area, including a burned-out building still smelling of smoke, alongside officials including Attorney General William Barr and acting Homeland Security Secretary Chad Wolf. He spoke with members of law enforcement as he visited the site, as well as six people who reportedly lost their businesses during the riots.

"Kenosha been ravaged by anti-police and anti-American riots," he said at a roundtable with law enforcement and business owners after also visiting an emergency operations center.

"These are not acts of peaceful protests, but domestic terror," he said.

Trump's visit was also met by protesters, with a large group raising their middle fingers at the president as the motorcade passed.

Trump’s visit comes as he seeks to present a tough-on-crime approach and contrast it with that of Democratic presidential rival Joe Biden.

"To stop the political violence we must also confront the radical ideology that includes this violence. Reckless far-left politicians continue to push the destructive message that our nation and our law enforcement are oppressive or racist -- they'll throw out any word that comes to them," he said at the roundtable.

The visit comes over the objections of local Democrats, with Gov. Tony Evers, who has deployed the National Guard to help stop the violence, saying Trump’s presence “will only hinder our healing.”

"I am concerned your presence will only delay our work to overcome division and move forward together,” he said in a letter to Trump ahead of the visit.

Trump has since hailed the deployment of the National Guard, which he had called for, as a turning point in stemming the chaos.

"The Violence stopped six days ago, the moment the Guard entered the picture," he tweeted Tuesday morning. He said in Kenosha that if more states would deploy the National Guard, "it would all over very very quickly."

His visit took a markedly pro-police tone, saying that cops are put under "tremendous pressure."

"They have a quarter of a second to make a decision, and if they make a wrong decision one way or another, they're either dead, or they're in big trouble -- and people have to understand that," he said.

The protests and riots were sparked by the shooting of Jacob Blake last week -- something protesters point to as another example of police brutality against Black men. Video seen on social media shows an officer shooting at Blake as he reached into his vehicle, where Wisconsin officials later said a knife was found. The shooting left Blake paralyzed, according to his father. 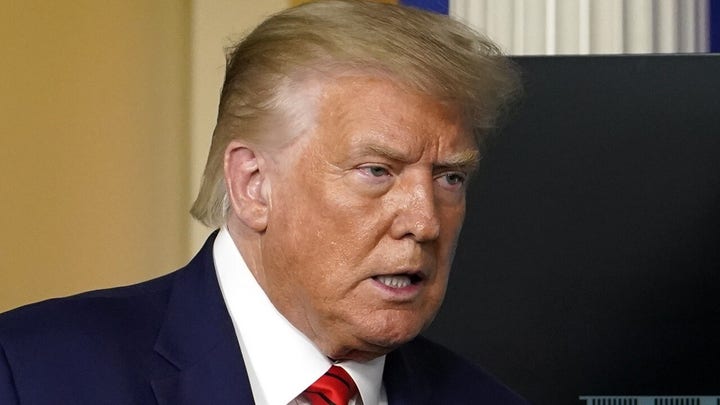 During the protests sparked by the shooting, a pro-police 17-year-old Illinois male is accused of fatally shooting two people and wounding a third. Kyle Rittenhouse faces homicide charges in the shootings; his lawyer has claimed self-defense.

Trump said Monday that it appeared Rittenhouse acted in self-defense.

“That was an interesting situation," Trump said during a press conference. “He was trying to get away from them, I guess, it looks like, and he fell. And then they very violently attacked him. ... He was in very big trouble. He would have been — you probably would’ve been killed.”

Protests and riots have hit a number of American cities throughout the summer since the death of George Floyd in police custody in Minnesota in May. But the violence in Wisconsin, a key swing state, could have electoral implications. Polls in recent days suggest Biden’s lead over Trump has tightened there.

The president has repeatedly warned that the unrest, occurring in Democratic-run cities, will only intensify if Biden’s elected in November.

On Monday, Biden traveled to Pittsburgh, where he took aim at Trump’s approach on the issue, asking, “Does anyone believe there will be less violence in America if Donald Trump is reelected?”

He charged that “this president long ago forfeited any moral leadership in this country. He can’t stop the violence – because for years he has fomented it ... fires are burning and we have a president who fans the flames rather than fighting the flames.”