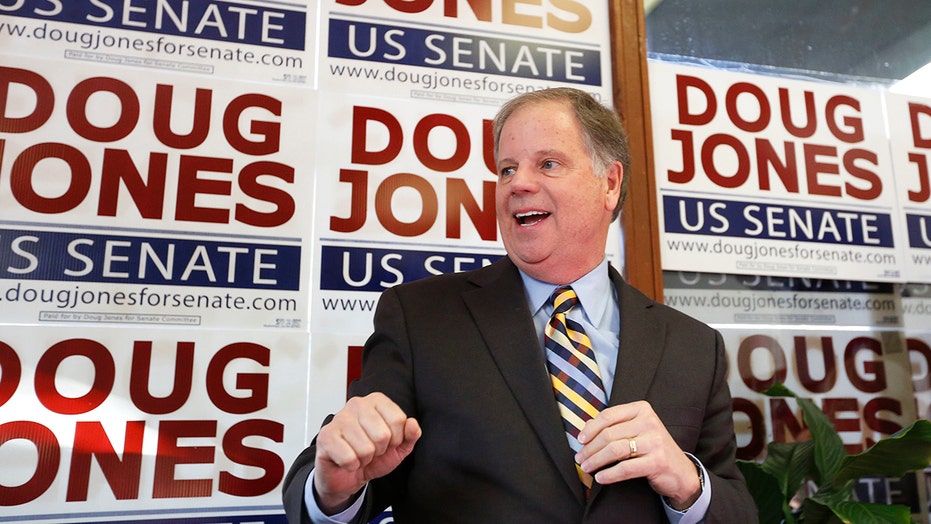 America First Policies, a pro-Trump nonprofit, announced a $1 million ad campaign in three states on Tuesday, to counter the impeachment narrative from congressional Democrats as the president's Senate trial gets underway.

The ad push will start in Alabama on Wednesday, covering Birmingham, Huntsville, Mobile and Montgomery. The commercials will target the vulnerable Sen. Doug Jones, D-Ala., who is up for reelection in November.

In 2017, Jones won the Senate seat vacated by former Attorney General Jeff Sessions after he left to join the Trump administration. The seat was considered to be reliably Republican until the GOP candidate Roy Moore saw his campaign marred by allegations of sexual misconduct.

AFP is funneling $450,000 worth of ads to Alabama, with the hope of reaching 87.6 percent of all voters in the state.

The 30-second commercial opens with soundbites of Democrat lawmakers pushing for impeachment before the narrator accuses them of orchestrating an obsessive and "shameful witch hunt."

The video quickly cuts to Jones, who says, "It's not a witch hunt. It's not a hoax."

The narrator returns to accuse Jones of playing politics instead of working to appoint a competent judiciary and thinking of ways to secure America's southern border.

"Instead of fighting for our values, instead of confirming conservative judges, instead of securing our borders by funding the wall, Jones is siding with them," the voice says. "So call Doug Jones. Tell him to stop standing with the radical left and end impeachment."

Jones' spokesperson, Caroline Stonecipher, provided Fox News with an emailed statement on Tuesday in response to the ad

“This ad is an attempt to distract from Sen. Jones’ record of getting things done on behalf of the people of Alabama," the statement read. "Anyone who has followed Sen. Jones in recent months knows that he is committed to upholding his oath to protect and defend the Constitution, and he has approached this impeachment trial with the seriousness it demands."

"Contrary to the blatant lies in this ad, he has also supported over 70 percent of President Trump’s judicial nominees and has voted at least five times for additional border security funding," it continued. "Regardless of pressure from outside groups, Senator Jones will remain focused on being an independent voice for Alabamians.”

Fox News reached out to AFP Communications Director, Kelly Sadler, who said the rest of the ad money would be spent on advertising in the battleground states of Michigan and Pennsylvania. Trump carried both states by a narrow margin in 2016.

Sadler said the anti-impeachment theme will continue, with each ad targeted to the state it runs in.

AFP will spend $850,000 on television ads in all three states, while the remaining $150,000 will be funneled into digital ads, according to a press release.