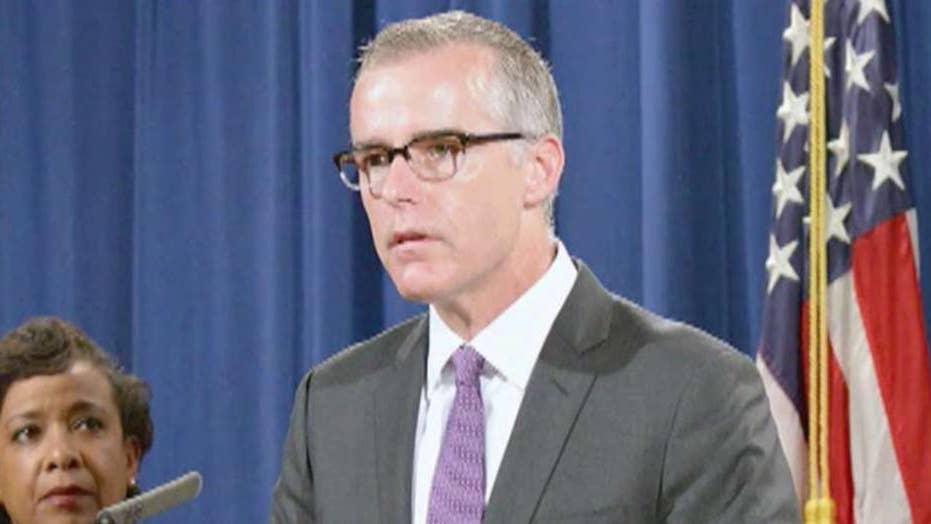 "Every time the two met, the president would bring up McCabe's wife and how she lost her election," a source close to McCabe said.

Attorney General Jeff Sessions fired McCabe on Friday. The president has celebrated McCabe’s ouster on Twitter as “a great day for the hard working men and women of the FBI.”

Rep. Adam Schiff says the deputy director's dismissal from the FBI just hours before his retirement 'may have been justified'; reaction from radio talk show host Bill Spadea and Tiffany Cross, co-founder of The Beat DC.

McCabe’s wife ran as a Democrat for a Virginia state Senate seat in 2015, and she received donations from Virginia Gov. Terry McAuliffe's super PAC. McAuliffe is a close Clinton ally.

McCabe has identified himself as a lifelong Republican, but has said he did not vote in the 2016 presidential election.

These details about Trump’s reference to McCabe’s wife are included in the memos McCabe wrote about his interactions with the president, the source said. Those memos have now been turned over to Special Counsel Robert Mueller's team.

The president has referenced McCabe’s wife and those donations on Twitter.

“How many hundreds of thousands of dollars was given to wife’s campaign by Crooked H friend, Terry M, who was also under investigation?” he tweeted Saturday.

According to the source,  McCabe's memos also detail meetings former FBI Director James Comey had with the president.

"These memos also corroborate Comey's version of his meetings with President Trump,” the source said.

Trump lashed out against Mr. McCabe and the memos over Twitter, expressing skepticism about their existence.

"Spent very little time with Andrew McCabe, but he never took notes when he was with me,” Trump tweeted. “I don't believe he made memos except to help his own agenda, probably at a later date. Same with lying James Comey. Can we call them fake memos?"

McCabe was fired just days before he would have been eligible for a lifetime pension after it was determined by career officials at the DOJ and FBI that he lied to investigators reviewing the bureau’s probe of Hillary Clinton’s email server.