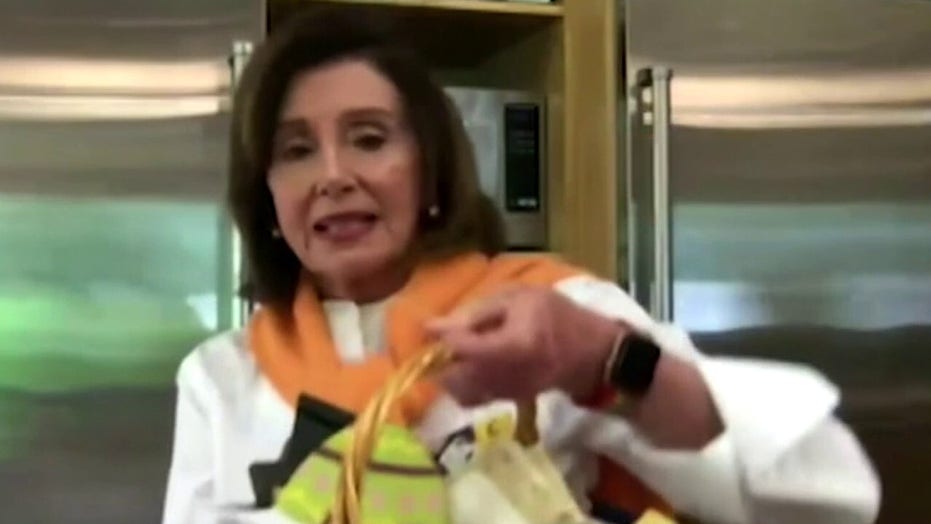 President Trump on Thursday drew renewed attention to House Speaker Nancy Pelosi's ill-advised February 24 trip to San Francisco's Chinatown, where she urged residents to flock to shops and restaurants in defiance of the coronavirus outbreak.

Last month, Pelosi charged that people were dying as Trump "fiddles" -- but the video, Trump said, made clear that Pelosi wasn't accomplishing much to halt the virus herself.

"Crazy Nancy Pelosi deleted this from her Twitter account," Trump wrote, showing a local news report of Pelosi's trip to Chinatown. "She wanted everyone to pack into Chinatown long after I closed the BORDER TO CHINA. Based on her statement, she is responsible for many deaths. She’s an incompetent, third-rate politician!"

A day before Pelosi's trip to Chinatown, coronavirus infections surged in Italy and South Korea, and authorities in Italy begin locking down towns.

Internet archives of Pelosi's tweets do not indicate that she deleted any video from her account that had been posted February 24, but the Trump campaign manager Brad Parscale emphasized separately that Pelosi doesn't want "Americans to see what she said then."

Earlier in the day, Trump wrote of Pelosi, "She is totally incompetent & controlled by the Radical Left, a weak and pathetic puppet. Come back to Washington and do your job!"

Pelosi's call for crowds to assemble in Chinatown, which were widely covered by sympathetic local news reports, came the same day that the White House submitted a request to Congress for $2.5 billion in supplemental spending to help combat the coronavirus.

“It’s exciting to be here, especially at this time, to be able to be unified with our community,” Pelosi told reporters. “We want to be vigilant about what is out there in other places. We want to be careful about how we deal with it, but we do want to say to people ‘Come to Chinatown, here we are — we're, again, careful, safe — and come join us.'”

She added that "everything is fine" and "all is well."

In New York on February 9, officials made similar claims. Mark Levine, the chair of New York City Council health committee and a Democrat, tweeted: "In powerful show of defiance of #coronavirus scare, huge crowds gathering in NYC's Chinatown for ceremony ahead of annual #LunarNewYear parade. Chants of 'be strong Wuhan!' If you are staying away, you are missing out!"

Trump and other Republicans have hammered Pelosi in recent days for holding up an expansion of the government's small business loan program, known as the Paycheck Protection Program, which ran out of funds on Thursday.

Pelosi has also been hit for appearing in front of two luxury, $10,000 refrigerators at her home stocked with ice cream during a comedy show interview, even as the small business program falters.

Fox News has prepared a comprehensive timeline of coronavirus-related statements by Pelosi and others, which have changed dramatically in recent weeks.

On January 24, Politico reported, the Trump administration held a briefing on the coronavirus for senators, but it was "sparsely attended" in part because it "was held on the same day as a deadline for senators to submit their impeachment questions."

"Since I’m encouraging New Yorkers to go on with your lives + get out on the town despite Coronavirus, I thought I would offer some suggestions," New York City Mayor Bill de Blasio tweeted on March 2. "Here’s the first: thru Thurs 3/5 go see 'The Traitor' @FilmLinc. If 'The Wire' was a true story + set in Italy, it would be this film."

“The flu right now is far deadlier," Cooper said. "So if you’re freaked out at all about the coronavirus you should be more concerned about the flu, and you can actually do something about it, and get a flu shot."