Trump on coronavirus response: Things that would have taken 2 years we did in 2 weeks

President Trump, in a wide-ranging interview on “Fox & Friends” Tuesday, said his campaign was going “very well” and that Joe Biden was “imploding” over reports about a laptop allegedly belonging to his son, Hunter.

“It's just going very well,” Trump said of his campaign, adding of Biden: "I think he’s imploding, you look at all that corruption in his family, tremendous corruption.”

Trump was referring to recent revelations about a laptop, which purportedly contains emails about Hunter's business dealings, and reportedly suggests ties to his father, former vice president Joe Biden, in Ukraine and China.

“That laptop, no one has ever seen anything like it, he’s gone into hiding,” Trump said.

The president also responded to calls by House Republicans for Attorney General William Barr to appoint a special counsel to investigate.

"We got to get the attorney general to act, and he’s got to act fast, he’s got to appoint somebody," Trump said.

Trump spoke two days before the second presidential debate, where he predicted what he expects, and accused Biden of playing a "dirtier" game than Hillary Clinton did in 2016.

“Hillary was a much smarter person than him, but they play a much dirtier game, and she was dirty with emails and everyone else... she was terrible,” he said.

On the election, the president framed it on issues such as taxes and regulations, and warned of a socialist nightmare if Biden was to win in two weeks.

“The bottom line: The American dream, the great American dream versus being a socialist hellhole," he said when asked what the difference is between him and Biden winning.

"Because they’re going to turn us into a socialist nation, we’re going to be no different than Venezuela and I’ll tell you what -- it can happen."

On the election, Trump was as upbeat as he had been in a call on Monday, where he predicted victory on Nov. 3 and touted the campaign’s performance in a number of key battleground states.

While public polls show Trump behind Joe Biden nationally, battleground states are somewhat tighter, and the Trump campaign says its internal polling shows a clear path to victory over the Democratic rival.

"We’re up in Florida, way up, we’re up in North Carolina...Pennsylvania is pretty even, we got a ruling yesterday that was ridiculous, where they can count ballots after the election is over,” he said, referring to a Supreme Court ruling.

Trump also talked about the coronavirus, particularly the recovery which he described as a "super v," and touted his administration's response to the virus. 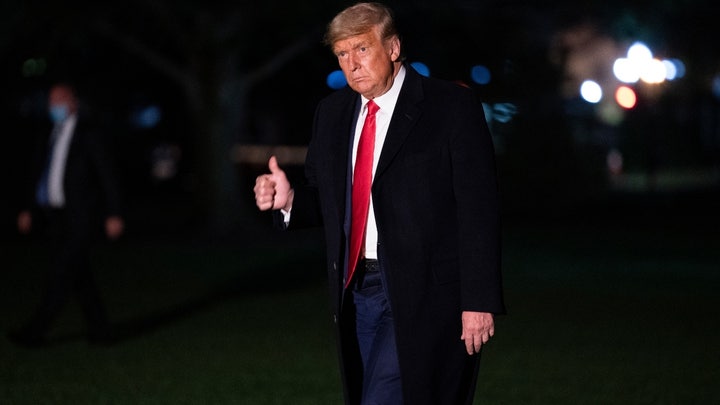 Earlier this month, the president tested positive for COVID-19 and was hospitalized at Walter Reed National Military Medical Center for several days before returning to the White House. On Monday, he said he got better "very fast" and felt like "Superman."

But Trump touted his administration's moves to open up, unlike other countries in Europe and elsewhere, as well as efforts toward a vaccine.

"We locked down less and we've recovered faster," he said, pointing to unemployment rates much lower than some had predicted.

"There will be no shutdowns," he added later.

In terms of a stimulus package, where negotiations are ongoing with House Democrats. House Speaker Nancy Pelosi had called for more than $2 trillion in stumulus.

Trump said that "I want to do it even bigger than the Democrats."

"This is money going to people that did not deserve what happened to them coming out of China," he said. "We want to do it, but Nancy Pelosi doesn't want to do it."

He said he would be willing to go higher than $2.2. trillion, arguing that it is better than unemployment and other costly alternatives.

However, he took a swipe at New York Gov. Andrew Cuomo's handling of the virus in the Empire State, and Cuomo's skepticism of a potential vaccine. Cuomo said he would put together a panel to take a look at the vaccine when it comes out.

"He's going to put together the same group of people probably that he used to put together in the nursing homes where 11,000 people died because they put heavily infected people with the general population -- is that the people he's going to use to help us out?"