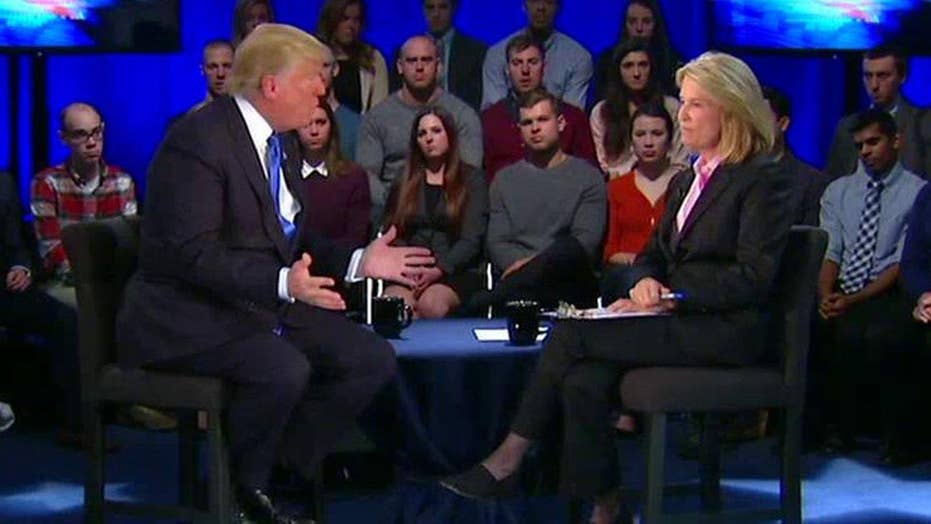 'On the Record' Town Hall with Donald Trump: 2016 GOP front-runner says US can't continue spending billions on other countries that may be capable of defending themselves, says he wants reimbursement for America

Republican presidential candidate Donald Trump doubled-down Sunday night on his comments that the U.S. should “do a better deal” with Japan, South Korea and other allies, saying they should pay more for America’s protection while taking a greater role in their defense — including building their own nuclear weapons.

Responding to questions at a Fox News Channel “On the Record” town hall two days before the Wisconsin primary — where polls show he trails Ted Cruz — Trump also said that raising the minimum wage to $15 an hour wasn’t good for business or jobs creation.

"If you start raising that minimum wage, you're going to make a lot of our companies even more non-competitive," he said.

Trump also delved into his plans to change the nation's tax code by "simplifying" it.

"The very rich are probably going to end up paying more, but there's an incentive for them to invest and create jobs in the country," he said.

He also renewed his promise to repeal ObamaCare — though he again wouldn’t offer specifics about what would replace it.

Trump pointed to the deals to defend countries such as Japan, Germany, and South Korea as an example of how the U.S. is a "policemen to the world."

"We defend all these countries, we're not properly reimbursed for the kind of money that we're spending," he said.

In recent days, the first-time candidate retweeted an unflattering picture of primary rival Texas Sen. Ted Cruz’s wife and suggested NATO is obsolete and “some form of punishment” is needed for women who have abortions if the procedure were illegal.

“I could have done without the tweet,” Trump said earlier in the day on “Fox News Sunday.”

Trump wouldn’t agree that he made a mistake on the abortion question, but said, “As a hypothetical question, I would have rather answered it in a different manner.”

He eventually issued two statements to clarify his comments.

Trump held firm on his position that NATO has become obsolete.

He said the international peacekeeping force doesn’t focus enough on stopping terrorism and that the United States pays too much for what it gets in return.

“It's obsolete,” Trump said. “We're not getting the benefits that we should be getting for the money. We're carrying a lot of countries. … What I said was exactly right. … I think NATO has to be readjusted.”

Trump also stuck by his suggestion that it’s perhaps time for the U.S. to stop paying most of the bill to defend Japan and South Korea against nuclear-armed North Korea, even if that means touching off a nuclear arms race in the Korean peninsula.

Trump has run his campaign since June in an unabashed style in which he has risen in the polls in part with unapologetic remarks about deporting roughly 11 million illegal immigrants in the United States and a call for a temporary ban on Muslim immigrants.

On Sunday, the New York real estate magnate still expressed confidence about doing well in Wisconsin and winning the party nomination. He acknowledged, however, being a politician for just eight months and having a “learning curve.”