President Trump posted a photo of his paycheck to Twitter on Monday, revealing that the money would be donated to the Department of Homeland Security. (AP Photo)

President Trump on Monday revealed he donated a quarter of his $400,000 salary to the Department of Homeland Security.

"While the press doesn't like writing about it, nor do I need them to, I donate my yearly Presidential salary of $400,000.00 to different agencies throughout the year, this to Homeland Security," Trump tweeted. "If I didn't do it there would be hell to pay from the FAKE NEWS MEDIA!"

Trump posted a photo of the check, which was dated March 12 and paid to the order of the Department of Homeland Security. It was signed by Trump, whose address was listed as Trump Tower on New York City's Fifth Avenue.

It was not immediately clear for what quarter the paycheck stems from, but the White House in January said Trump donated his salary from the third quarter of 2018 to the National Institute on Alcohol Abuse and Alcoholism.

While a candidate for the presidency in 2016, Trump pledged not to accept the $400,000 annual presidential salary, which, by law, must be paid out.

So Trump has donated the quarterly payments to various federal departments and agencies — including the departments of Education, Health and Human Services, Transportation and Veterans Affairs, among others.

Homeland Security is comprised of several different agencies or organizations that focus on securing the U.S. and its citizens. Citizenship and Immigration Services (USCIS), the Coast Guard, the Secret Service, Transportation Security Administration (TSA), Immigration and Customs Enforcement (ICE) and Federal Emergency Management Agency (FEMA) are among those included under the department umbrella.

Fox News' Madeline Fish and The Associated Press contributed to this report. 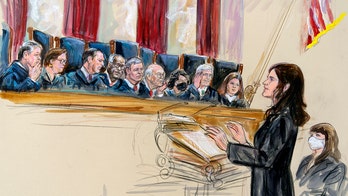