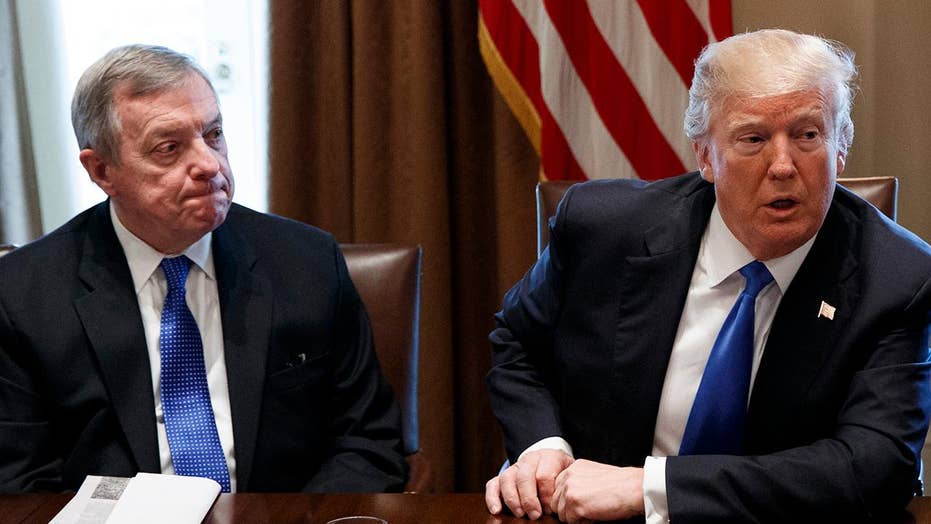 John Roberts reports from the White House on the latest in the DACA war of words.

In the face of ongoing backlash against President Trump’s reported “s---hole” comments during a bipartisan meeting on immigration last week, the president came out swinging on Monday afternoon by blasting one of his chief opponents in the Senate, Minority Whip Dick Durbin of Illinois.

“Senator Dicky Durbin totally misrepresented what was said at the DACA meeting,” Trump tweeted. “Deals can’t get made when there is no trust! Durbin blew DACA and is hurting our Military.”

It's unclear if the “Dicky” moniker will stick. The president has given derisive nicknames to many of his opponents, including presidential election rivals “Little Marco Rubio” and “Lyin' Ted Cruz.”

A small group of Republicans and Democrats was in the closed-door meeting on Thursday at the White House, including Durbin and South Carolina Republican Sen. Lindsey Graham.

“Why are we having all these people from s---hole countries come here?” the president reportedly said, seemingly referring to people from Haiti, as well as some Central American and African countries. The president added that the U.S. should admit more people from countries like Norway.

Trump made the comments, sources said, as Durbin was reading a list of temporary protected status countries.

“I cannot believe that in the history of the White House, in that Oval Office, any president has ever spoken the words that I personally heard our president speak yesterday,” Durbin tweeted on Friday. “President Trump said things that were hate-filled, vile, and racist. He used those words repeatedly.”

But Trump fought back against reports of the meeting, arguing on Jan. 12 that “the language used by me at the DACA meeting was tough, but this was not the language used. What was really tough was the outlandish proposal made - a big setback for DACA!”

Trump points finger at Democrats for holding up DACA deal

John Roberts reports from the White House on the president's remarks at Mar-a-Lago.

“Never said anything derogatory about Haitians other than Haiti is, obviously, a very poor and troubled country,” the president continued. “Never said ‘take them out.’ Made up by Dems. I have a wonderful relationship with Haitians. Probably should record future meetings - unfortunately, no trust!”

The comments at the meeting sparked outcry from both Republicans and Democrats, prompting the president to counter claims that he is racist.

“I’m not a racist,” Trump said Sunday night to reporters. “I am the least racist person you have ever interviewed. That I can tell you.”

The president and Congress are attempting to reach a deal on comprehensive immigration reform as part of a federal spending bill that Congress must pass by Friday to avoid a government shutdown.

Trump and Congressional Republicans are seeking increased funds for border security and changes to the lottery and “chain migration” programs in exchange for providing permanent protection for "Dreamers" in the Deferred Action for Childhood Arrivals (DACA) program.