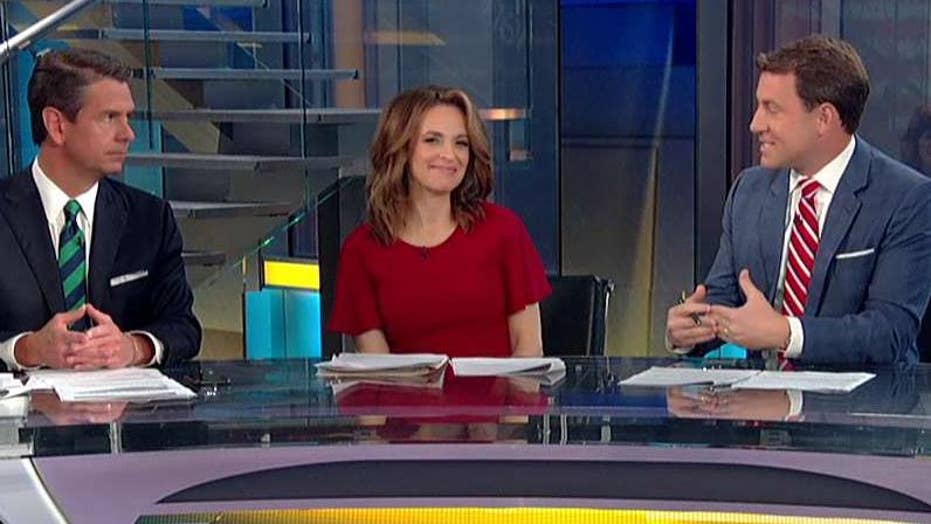 Trump comes to Pelosi's defense amid battle with Alexandria Ocasio-Cortez.

After triggering backlash over tweets urging progressive congresswomen to go back to their "broken and crime infested" home countries, President Trump appeared unbowed Sunday night, suggesting it was "so sad" to see Democrats sticking up for the lawmakers.

"So sad to see the Democrats sticking up for people who speak so badly of our Country and who, in addition, hate Israel with a true and unbridled passion. Whenever confronted, they call their adversaries, including Nancy Pelosi, 'RACIST,'" Trump tweeted. "Their disgusting language... and the many terrible things they say about the United States must not be allowed to go unchallenged."

He continued, "If the Democrat Party wants to continue to condone such disgraceful behavior, then we look even more forward to seeing you at the ballot box in 2020!"

Trump’s earlier attack drew a searing condemnation from Democrats who labeled the remarks racist and breathtakingly divisive. The president’s tweets led Democrats in large part to set aside their internal rifts to rise up in a united chorus against the president. Republicans remained largely silent.

Trump's tweets did not name any specific congresswomen. However, among his frequent targets is Rep. Ilhan Omar, D-Minn., the first Somali native elected to Congress and one of its first Muslim women. She was born in Somalia but spent much of her childhood in a Kenyan refugee camp as civil war tore apart her home country.

New York Rep. Alexandria Ocasio-Cortez, who is of Puerto Rican descent, was born in the Bronx, N.Y., and raised in suburban Westchester County. Trump's latest tweets appeared to reference Ocasio-Cortez; she had accused House Speaker Nancy Pelosi, D-Calif., of "singling out" women of color last week, although she later denied she was accusing Pelosi of racism.

Ocasio-Cortez had fired back at Trump's initial tweets. "You are angry because you can’t conceive of an America that includes us. You rely on a frightened America for your plunder," she tweeted, later adding: "But you know what’s the rub of it all, Mr. President? On top of not accepting an America that elected us, you cannot accept that we don’t fear you, either. You can’t accept that we will call your bluff & offer a positive vision for this country. And that’s what makes you seethe."

Omar, for her part, responded to Trump's latest tweets by quoting author James Baldwin: "There are few things more dreadful than dealing with a man who knows he is going under, in his own eyes, and in the eyes of others. Nothing can help that man. What is left of that man flees from what is left of human attention."

Pelosi tweeted, "When @realDonaldTrump tells four American Congresswomen to go back to their countries, he reaffirms his plan to 'Make America Great Again' has always been about making America white again. Our diversity is our strength and our unity is our power."