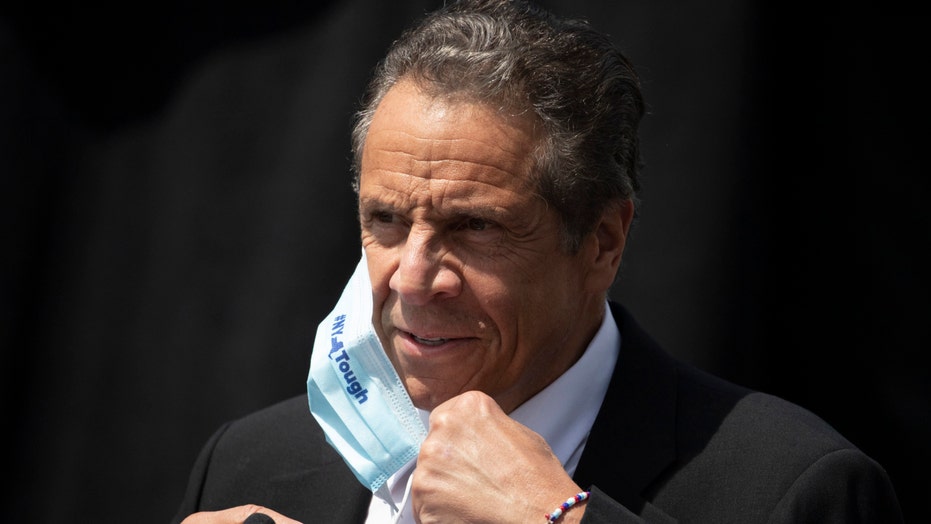 NY Gov. Cuomo places blame on President Trump, administration for the outbreak in New York during a press briefing.

President Trump on Thursday slammed New York Gov. Andrew Cuomo as “one of the worst governors” in the country, criticizing his handling of the coronavirus pandemic in the Empire State.

The president's tweet was in response to former House Speaker Newt Gingrich's tweet, where he stated "shootings in New York City are up 166% over last year" and "Cuomo wants 4,000 police assigned to checking restaurants for covid enforcement."

“Is he deranged or so arrogant no one can talk sense into him?” Gingrich tweeted.

The president replied: “One of the WORST governors in the USA. Caused 11,000 deaths in nursing homes due to his bad moves and incompetence.”

Gingrich’s tweet was referring to Cuomo’s announcement Wednesday that restaurants in New York City could reopen at 25% capacity for indoor dining beginning Sept. 30.

The governor has suggested assembling a task force of 4,000 New York Police Department officers to enforce social distancing restrictions in restaurants. On Wednesday, he announced team of 400 enforcement personnel will work with the State Police Task Force to ensure compliance in New York City restaurants.

Cuomo explained that there will be “temperature checks at the door,” and that “one member of each party” will be required to leave contact information so that the restaurant can conduct “contact tracing” if there is an outbreak related to the restaurant.

The governor said there will be “no bar service,” but that bars will be opened for the wait staff only, to “make drinks and transfer them over the bar.”

Customers will be required to wear masks at all times inside the restaurant, except when seated at the tables, which will be situated at least six feet apart.

Cuomo also encouraged customers to report through the state’s anonymous system if there is any kind of violation of coronavirus guidelines, so that the state can “hit the pause button” on “any of the activities we’re allowing.”

Cuomo added that the state has set a deadline of Nov. 1 to determine whether the state will allow up to 50% capacity in restaurants in New York City.

Later Thursday morning, Cuomo fired back, slamming the president for "failed leadership" and "incompetence" amid the pandemic, which he said cost "thousands of lives."

"Trump now criticizes me b/c I speak the truth. He can't handle it," Cuomo tweeted. "He said my COVID leadership was 'great,' I was 'working hard' & 'applauded' me for my 'bold' response."

Meanwhile, as for the crime statistic, CBS New York reported last week that New York City saw a 166% increase in shooting incidents in August — 242 compared to 91 in August 2019.

The increase comes after the NYPD in June announced it was disbanding its anti-crime unit and reassigning hundreds of plainclothes officers to other divisions, and after the New York City Council passed a budget that would strip the NYPD of $1 billion in funding.

In June, Cuomo signed an executive order that included a statewide ban on chokeholds and an appointment of a special prosecutor to review cases of police killing unarmed individuals. The legislation also made fake race-based 911 calls a crime.

Cuomo also signed an executive order that would withhold funds from police departments that were not directed toward reforms. The order required police departments across the state to work with communities to enact further reforms. That order required that every city and county had to “reinvent” and “modernize” its police strategies by April 1. If a locality failed to do so by the deadline next year, the area would not be eligible for state funding.

Meanwhile, Trump, also on Thursday, cited another tweet, this time from the New York State Senate GOP communications director, who tweeted: “Every day 1,000 people leave the tristate area for FLORIDA. New York comes LAST for population growth,” along with a Daily Mail article.