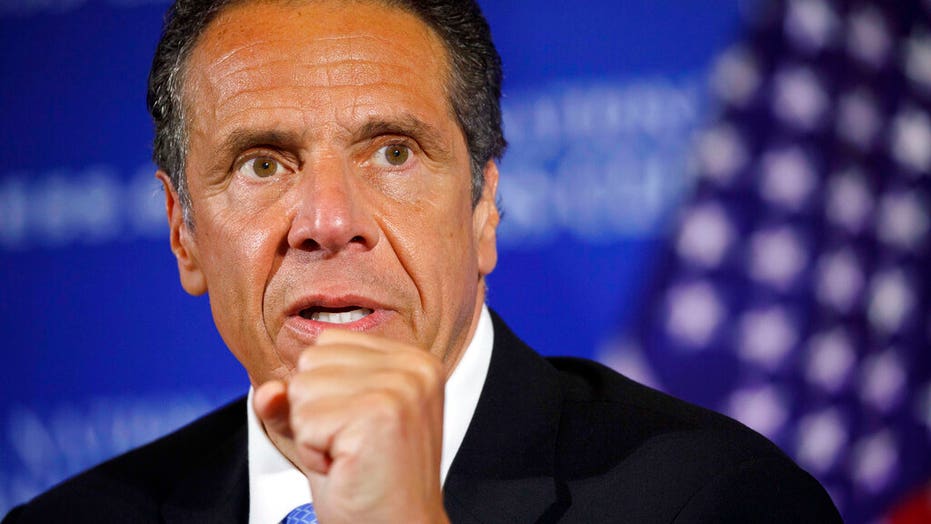 New York Gov. Andrew Cuomo claimed Tuesday that President Trump “caused” the coronavirus outbreak in New York by not banning travel from Europe sooner -- the latest in an escalation of words between the politicians.

"Donald Trump caused the COVID outbreak in New York,” Cuomo said during a press briefing. “That is a fact. It’s a fact that he admitted, and the CDC admitted, and Fauci admitted.”

He also slammed the president for calling coronavirus the “China virus.”

“The China virus got on a plane and went to Europe,” Cuomo said. “The European virus came to New York.”

“In mid-March the federal government does the travel ban from Europe,” the Democratic governor said. “Too little too late, Mr. President.” He called Trump’s CDC, National Institutes of Health and Department of Homeland Security “incompetent.”

“The virus killed many more Americans than anything you were worried about on the southern border,” he said. “This nation loses more people per day to COVID than any nation on the globe.”

TRUMP FIRES BACK AT CUOMO AFTER CORONAVIRUS CRITICISM IN DNC SPEECH

“You know who did that? Donald Trump’s incompetence,” he added. “And now, they won’t provide federal funding to help repair the damage from the ambush they created.”

New York has faced the fourth highest number of confirmed coronavirus cases in the U.S., but has the highest death count so far-- 440,578 New Yorkers have contracted the virus and 33,002 have died, according to Johns Hopkins.

Cuomo added that Trump is “trying to kill” New York City, pointing to a cap in SALT deductions from the Trump tax cuts.

Trump and Cuomo have traded shots over their handling of the pandemic, with Trump blaming the Democratic governor for thousands of deaths in nursing homes, referring to Cuomo's controversial policy in late March that essentially ordered nursing homes to accept coronavirus patients from hospitals, a measure designed to free up hospital beds. (He eventually reversed the order in May).

"Now AP estimates that the real Cuomo number of people killed because of his total incompetence is 11,000, not the 6000 that was originally thought!" Trump tweeted.

The state has officially reported a care home death toll of more than 6,600.

But unlike other states with major outbreaks, New York only counts residents who died on nursing home property, not individuals who were transported to hospitals and died there, according to the Associated Press. The discrepancy could add thousands of individuals to the state's nursing home death toll.

The Cuomo administration has refused to release the number, leading to speculation the state is intentionally manipulating the figures.

Cuomo hit Trump for his coronavirus response in the Democratic Convention as “dysfunctional and incompetent.” Trump later slammed the governor on Twitter. “A horrible Governor. Crime is taking over NYC & State, everyone is leaving. He is after the NRA – They should move to Texas or elsewhere, and must get tough. Cuomo killed 11,000 people in nursing homes alone. Crooked & Incompetent!”