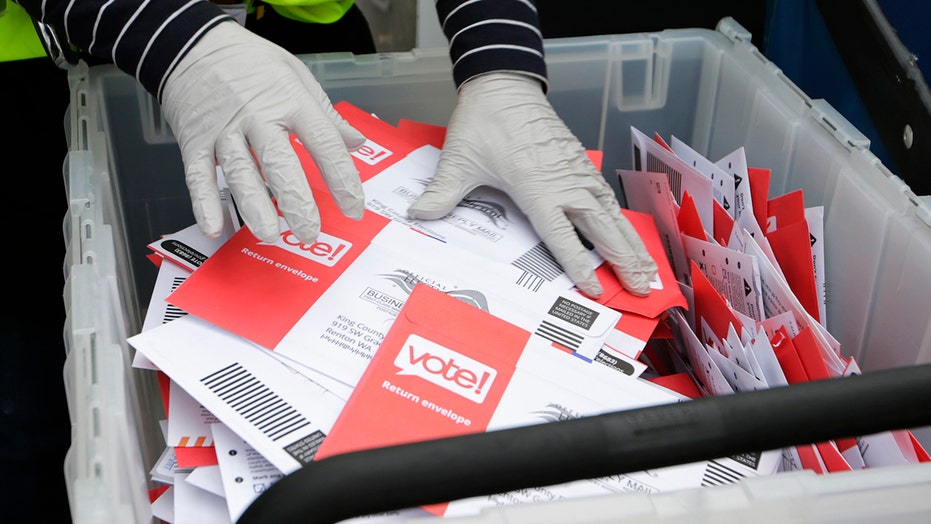 President Trump is taking aim again at the push by states to expand voting by mail due to health concerns over in-person voting during the coronavirus pandemic, arguing that it will spur voter fraud and result in a “rigged election.”

“There is NO WAY (ZERO!) that Mail-In Ballots will be anything less than substantially fraudulent. Mail boxes will be robbed, ballots will be forged & even illegally printed out & fraudulently signed,” Trump charged on Twitter Tuesday morning without citing specific evidence.

And the president zeroed in on California, where earlier this month Democratic Gov. Gavin Newsom announced that all registered voters in the state will receive a mail-in ballot for November’s general election. The move will make California the first state to give a vote-by-mail option specifically due to the coronavirus.

Trump claimed in his tweet that “The Governor of California is sending Ballots to millions of people, anyone living in the state, no matter who they are or how they got there, will get one. That will be followed up with professionals telling all of these people, many of whom have never even thought of voting before, how, and for whom, to vote. This will be a Rigged Election. No way!”

The Republican National Committee, the state GOP in California, the National Republican Congressional Committee and the California Republican Party recently teamed up to file a lawsuit to try and prevent the ballots from being mailed to all registered voters. The lawsuit argues that the governor’s executive order is an "illegal power grab" that invites potential fraud.

The president also took to Twitter twice on Sunday to blast moves to make it easier to vote by mail in November.

“The United States cannot have all Mail In Ballots. It will be the greatest Rigged Election in history. People grab them from mailboxes, print thousands of forgeries and 'force' people to sign. Also, forge names. Some absentee OK, when necessary. Trying to use Covid for this Scam!,” Trump tweeted Sunday morning.

And Sunday evening the president claimed that “The Democrats are trying to Rig the 2020 Election, plain and simple!”

As the president and the GOP have railed against recent attempts by Democrats to increase voting by mail, the RNC and the Trump reelection campaign have doubled their legal budget this year to hit back at efforts by Democrats to overhaul voting laws in response to the pandemic.

The president noted in a tweet early last month that “Tremendous potential for voter fraud, and for whatever reason, [it] doesn’t work out well for Republicans.”

In Oregon, where they’ve been voting by mail for over two decades, Democratic Gov. Kate Brown pushed back against the president’s claims in a tweet last week on the day after her state held its vote-by-mail primary.

“Mr. President: Oregon has been voting by mail for 22 years. We just had a great election yesterday. It was safe, secure, accessible. And we protected public health. What more do you need to know to be convinced, @realDonaldTrump?” the governor said.

A  national poll indicates that by a more than 2-to-1 margin, Americans favor allowing balloting through the mail in November’s general election due to health concerns amid the coronavirus pandemic.

Sixty-three percent of those questioned in the latest Fox News Poll released last week said they support allowing all U.S. citizens to vote by mail in the upcoming presidential election due to the concerns over the coronavirus, with 30 percent opposed.

But there’s a wide partisan divide on the question.

Eighty-three percent of Democrats favor voting by mail. A majority of independents – 60 percent – agree. But only 42 percent of Republicans support voting by mail this November, with 51 percent opposed.

The poll, conducted May 17-20, indicated that 48 percent say they’ll vote in person at a polling station this November. But that’s down from the 65 percent who said they usually vote in person on Election Day.